Until the mid-1950s, Chicago was not a sweet home for locally produced opera. True, in the 1910s and 1920s the Ravinia Festival offered summertime productions with internationally renowned singers at its open-air theater just north of the city. But otherwise, Chicago was a graveyard for homegrown opera. A half-dozen companies came and went, arriving with great promise only to disappear after a decade or so, leaving a trail of memorable performances and mountains of debt. 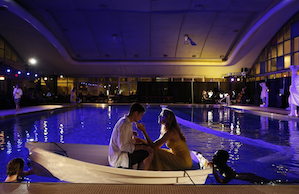 That pattern ended in 1954 with the establishment of Lyric Opera of Chicago, which celebrates its 60th anniversary next year. And, to the delight of Chicago opera lovers, Lyric is not the only game in town. At the moment, the city’s opera scene is enlivened by two other vibrant resident opera companies whose distinctive missions complement Lyric’s menu of grandly-scaled productions. In 2012, Andreas Mitisek, general director of the Long Beach Opera, signed on as Chicago Opera Theater’s general director as well, promising to focus the company on “the new, rare, and different.” The newbie on the scene, the three-year-old Haymarket Opera Company, is leaving audiences cheering its sparkling performances of Baroque opera.

Both companies had rousing successes earlier this fall. Chicago Opera Theater (COT) offered four haunting performances of Ricky Ian Gordon’s song cycle Orpheus and Euridice, in one of the city’s public swimming pools. Tickets were free, demand was high, and COT found itself turning away would-be listeners at the door. Haymarket stitched together three intermezzos by Georg Philipp Telemann into a rollicking production of Pimpinone that had its near-capacity audiences laughing so hard they cried.

Updated and In the ‘Hoods

Now in his second Chicago season, Mitisek is shaping a template that has worked well for him during the past decade at Long Beach. COT is approaching its 40th anniversary, and under Brian Dickie, general director from 1999 until 2011, it became known for superb young singers and boundary-pushing, updated productions of Baroque and contemporary opera. Mitisek is moving away from Baroque but continuing to push boundaries. 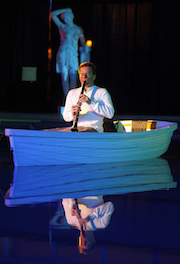 Chicago likes to call itself a city of neighborhoods and Mitisek is determined to export COT’s brand of opera beyond the walls of its home base, in the Harris Theater downtown. The water-borne Orpheus and Euridice, which Long Beach audiences saw in 2008 and 2010, seemed an ideal place to start.

With its low, arched ceiling that enclosed the audience like a cozy tent, the swimming pool inside a historic Park District field house in Chicago’s West Town neighborhood was an ideal setting for Gordon’s tale of love and loss. The audience of 230 sat along the deck surrounding the pool and in a balcony. A string quartet, bass, and piano tucked in a corner of the deck, accompanied the eloquent young soprano Valerie Vinzant as Euridice, and Todd Palmer, whose astoundingly expressive clarinet served as Orpheus’ lyre.

Co-sponsored by Chicago’s Department of Special Events and Cultural Affairs and the city’s Park District Orpheus and Euridice was a last-minute addition to COT’s schedule. The company’s subscription season ended in September, with an updated, brutally effective production of Verdi’s Joan of Arc. Working with other Chicago groups, looking at contemporary and rarely performed opera from innovative angles, Mitisek is forging a strong, new profile for COT.

Our mission is to present things that people most likely haven’t seen or wouldn’t be able to see within one season at the same opera company. - Andreas Mitisek, Chicago Opera Theater

“Our mission,” he said, “is to present things that people most likely haven’t seen or wouldn’t be able to see within one season at the same opera company. I think I’ve started building a very positive relationship with our audience. It’s a curious audience that reacts strongly to what we do. We’ve had more than 800 new subscribers for my first season. We’ve finished our second year in the black, and that’s an achievement for an organization that has been struggling financially in the past. We’ve reduced costs in many areas and we’ve increased contributions by quite a bit.”

COT’s 2014 season is a typical Mitisek mix of the new, rare and different. It opens Feb. 15-March 5 with Duke Ellington’s Queenie Pie, a look at the life of Madam C.J. Walker, the flamboyant black entrepreneur who made her fortune in hair products designed for the African-American market. It continues May 31-June 8 with the double-bill of Carl Orff’s Die Kluge (The Wise Woman) and Viktor Ullmann’s The Kaiser of Atlantis. The season wraps up Sept. 13-21 with a production of Ernest Bloch’s Macbeth, which Long Beach Opera presented in June. All the operas except The Kaiser of Atlantis are COT and Chicago premieres, and each will be performed four times. 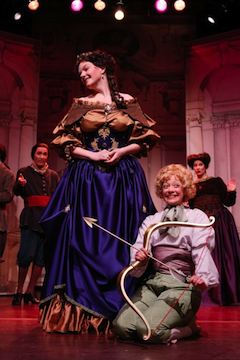 Chicago’s three opera companies have a symbiotic relationship. Lyric is the grand dame in town, and the COT board wants Mitisek to carve out fresh territory for the company. “There’s no point,” said one board member, in focusing on the mainstream repertoire that Lyric does so well. And with COT, and perhaps Lyric as well, moving away from Baroque opera, the musicians behind Haymarket Opera Company saw a niche to be filled.

“People had been wanting this to happen for a long time,” said Craig Trompeter, a gifted cellist, conductor and co-founder of Haymarket, with soprano Ellen Hargis, who serves as the company’s resident stage director. “Everybody was waiting for someone to do it. When we musicians got the chance to play Baroque opera, it was so exciting. We all sort of talked about how cool it would be to have a Baroque opera company. Ten years later, I decided, well, no one else was going to do it and it had to be done. So I just took the plunge. I really didn’t know what I was doing at first.”

Maybe not, but Haymarket Opera proved to be very fast out of the starting gate. Its stylish debut production, in September 2011, was Handel’s Aci, Galatea e Polifemo, (appropriate, given that Handel’s first theater was in the London Haymarket). Performances usually sell out: Lead singers are rising, young talents, the orchestra is impeccable and the stage direction is inventive and fast-paced. Haymarket’s home is the Mayne Stage, a former vaudeville house transformed into an elegant, intimate, cabaret space on Chicago’s Far North Side. It seats slightly under 230, and the audience is free to sip drinks as the performance unfolds in very close proximity to their chairs and tables.

Chicago doesn’t have an expansive early music scene like those in Boston or the San Francisco area. Its Music of the Baroque ensemble, now led by Music Director Jane Glover, has a long, distinguished history, but smaller period-instrument ensembles are few and far between. There was no guarantee of success, and Trompeter certainly didn’t know what he was getting into. But he also didn’t realize how many people were eager to help.

“It’s going very much better than I ever dreamed,” he said, sounding still a bit dazed about the company’s continued success. “I’m a musician. I’m an organized musician, but I’m not a theater person. There were so many things I didn’t know about that I do now. But when I made the announcement we were doing this, all these people came out of the woodwork.”

We all talked about how cool it would be to have a Baroque opera company. Ten years later, I decided, well, no one else was going to do it … So I just took the plunge. -Craig Trompeter, Haymarket Opera Company

Trompeter had good contacts with Chicago musicians, but Meriem Bahri, the company’s costume designer, approached him through a mutual friend. Trained as a biologist, she shifted focus and taught herself costume design. Her hand-made costumes for Haymarket look fresh and full of intricate detail.

“She’s a perfectionist,” said Trompeter. “She has a team of people helping her. Everything has to be ironed. Every night.”

The same pattern prevailed with the company’s set designer, David Mayernik. An architect and artist, he read about Trompeter’s plans and sent sample sketches for the company’s second show, Charpentier’s The Descent of Orpheus into the Underworld. Using flats and precisely drawn perspective, his sets have the vitality and austere elegance of a Palladian etching.

In her staging, Hargis emphasizes fidelity to 17th and 18th-century acting style and choreography. In addition to being a highly experienced, prized early music singer, Hargis teaches voice at Case Western Reserve University and runs numerous summer workshops on Baroque gesture and performance.

Haymarket is not letting its success go to its head, and Trompeter is being careful about expanding too far too fast. The company is maintaining its schedule of two productions per season for 2013-2014, but each will run for three rather than two performances.

Opera is a messy, insanely complex undertaking and finances are always a concern. But for now, Chicago opera lovers are basking in the luxury of multiple choices. Lyric’s subscription season continues into April with Die Fledermaus, Madama Butterfly, The Barber of Seville, Rusalka, and La Clemenza di Tito, topped off with 17 performances of The Sound of Music, April 25-May 11. Ellington’s opera will be in production at COT at the same time. On March 7-8 Haymarket presents three performances of Marc-Antoine Charpentier’s Le Jugement de Pan (The Judgement of Pan) and Acteon.

“Less is more” may have been the mantra of Chicago architects. But for the city’s opera lovers, more is definitely better.