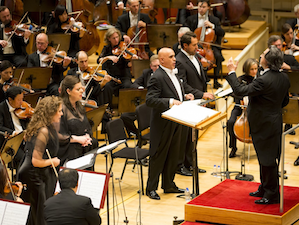 In the best possible sense of the term, Riccardo Muti enjoys making a spectacle of himself in Chicago.

To open his tenure as Chicago Symphony Orchestra music director in September 2010, Muti led the orchestra in a free outdoor concert. Approximately 25,000 people jammed Millennium Park downtown, most of them waving little flags and sporting campaign buttons bearing the slogan “Festa Muti.” It was corny and thrilling and an entirely appropriate launch for a music director devoted to forging stronger connections between the CSO and Chicagoans beyond the walls of Symphony Center.

There have been some memorable spectacles since then, including a concert for an audience of 6,000 in a large South Side church filled to overflowing and a Carmina Burana outdoors in a cold, pouring rain. And they continued this fall with the CSO’s celebration of the Verdi bicentennial.

Muti is perhaps the finest Verdi conductor working today, and his love for the Italian composer’s music is long-standing and deep. So it’s hardly surprising that all but one of the programs to begin the CSO’s 2013-14 season included works by Verdi.

The Verdi fest at Symphony Center included two unforgettable highlights: riveting concert performances of Macbeth Sept. 28, Oct. 1, 4, and 6 and a performance of the Requiem on Oct. 10, Verdi’s birthday. The Requiem concert was sold out months ago, but the CSO extended its reach far beyond Symphony Center. For the first time, the orchestra arranged a simulcast via satellite, beaming the Requiem to audiences watching massive video screens in Millennium Park’s Pritzker Pavilion and a high school in Chicago’s largely-Hispanic Pilsen neighborhood. In another first for the CSO, the concert was streamed live on the internet. Satellite simulcasts and streaming — bold steps for an institution that hasn’t exactly been setting the pace in the brave new digital world.

The real achievement, however, was the quality of the music-making itself in both the Requiem and Macbeth. The musicians obviously relished the chance to perform the music of a great composer who wrote very little expressly for symphony orchestra. Muti knows every last nuance of every last sigh and scream embedded in Verdi’s music. And the orchestra, along with the chorus and vocal soloists, gave him everything he wanted, from the most subtly shaded pianissimos to the most heaven-storming outbursts. These were performances to cherish.

As usual for Muti in Chicago, he avoided superstar soloists for both Macbeth and the Requiem. Principal singers in Macbeth were Italian baritone Luca Salsi as Macbeth, Russian soprano Tatiana Serjan as Lady Macbeth, Russian bass Dmitry Belosselskiy as Banquo, and Italian tenor Francesco Meli as Macduff. Serjan also appeared in the Requiem along with mezzo-soprano Daniela Barcellona, tenor Mario Zeffiri, and bass Ildar Abdrazakov.

At the Sept. 28 Macbeth performance, any longing for operatic superstars was soon forgotten. Serjan has become known throughout the opera world for her Lady Macbeth, and she, like Salsi and Meli, has worked with Muti at the Rome Opera. We had a sense of soloists on top of their roles and completely comfortable with whatever Muti required.

Serjan’s soprano is big and agile, full of silvery highlights that turned appropriately raw when Lady Macbeth’s ambition morphed into madness. As Macbeth related a terrifying encounter with the witches in Act III, she pounced with breathless intensity. “Segui (What else?)” she demanded, repeatedly interrupting Macbeth’s hushed, rapt story-telling. The tension, already high thanks to Muti’s subtle, precise baton, became hair-raising.

Salsi was fully Serjan’s vocal and dramatic match, spinning out poignant lyrical lines as well as frantic, short-breathed phrases. Belosselskiy was a noble Banquo and Meli a touching Macduff. The Chorus, directed by Duain Wolfe, added its own vivid color, whether spitting out the Witches’ fury or floating ethereal harmonies as the Scots mourned their war-ravaged country.

The seemingly infinite orchestral color that the CSO musicians created in Macbeth was doubly present in the Requiem. This is, of course, a staple of the symphonic repertoire, and the orchestra easily produced all the aural drama required. Hearing it in Millennium Park was a revelation.

Inevitably, something was lost. Outdoors, in a crowd of 3,500 spread over a large seating area and lawn near Lake Michigan in downtown Chicago, the Requiem isn’t as intense an experience as in a sold-out Symphony Center. But something was definitely gained. Watching the 40-by-22.5-foot LED screen, we had a fascinating glimpse of how the masterpiece unfolds. The camera work was deft and unobtrusive, and it was fascinating to be able to see actual notes on the scores on the players’ music stands.

Muti’s gestures were economical and never flamboyant, a sign that he trusted his singers and orchestra. All of the soloists brought emotional intensity to their roles, but Serjan’s “Libera me” had some of Lady Macbeth’s horrified desperation. With her rich, dusky mezzo-soprano, Barcellona brought profound pathos to her solos in the Dies Irae section.