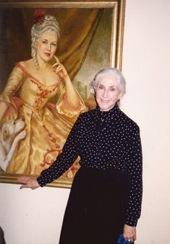 Jason Victor Serinus on March 24, 2010
Blanche Thebom, one of the great operatic mezzos of the postwar era, died at her home in San Francisco on March 23. Increasingly isolated due to dementia, Miss Thebom, as she was known to most, or “Miss T,” as she was called by many of her students, died a week after contracting pneumonia.

During her career, Thebom was prized equally for the rich maturity of her voice, her face and figure (which also received their due in a number of films, including The Great Caruso), her profound acting ability and innate musical intelligence, and even her long tresses (at one time, her hair descended over 6 feet, far longer than her reach). 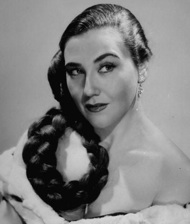 Raised in Canton, Ohio, Thebom sang in a church choir as a youngster. After completing business college, she sang occasionally while working as a secretary for seven years in an industrial firm.

In1938, while traveling with her parents by ship to Sweden, she was heard singing in an onboard concert by Kosti Vehanen, accompanist to contralto Marian Anderson. Urged to study opera, Thebom soon found herself studying with famed mezzo-soprano Edyth Walker (1867-1950), who traced her singing technique directly back to Manuel García and Maria Malibran. Thebom later maintained that, due to this lineage, she was one of the few singers who could teach the true bel canto style.

After impresario Sol Hurok heard her sing at her teacher’s studio, Thebom began singing professionally. Her first New York concert appearance, in January 1944, led to her Metropolitan Opera debut as Brangäne in Wagner’s Tristan und Isolde in Philadelphia on November 28, 1944, and her house debut as Fricka in Wagner’s Die Walküre on December 14. (For a complete list of Met roles and appearances, see here .) Both roles, as well as other leading mezzo parts in Wagner’s Meistersinger, Tannhäuser, and Das Rheingold, became closely associated with her. Over the course of her 22 years with the Met, she sang 356 performances in 28 roles in 27 works.

San Francisco Opera Director Lotfi Mansouri, who never directed her, recalls that the closest he got to Thebom was when she stepped into the role of Mother Marie. It was also the role with which she bid her local company farewell in 1963 during a tour to Los Angeles.

Although virtually every biography states that Thebom was born in Monessen, Pennsylvania, in 1918, she confided to Mary Jean Clauss, former president of the San Jose Opera Guild and Thebom’s untitled assistant and manager during the 15-year period that Thebom chaired the Pacific Region Metropolitan Opera National Auditions, that she was born in 1915.

“Somehow word got around that I was born in 1918,” she said, “and I never bothered to correct them.” Anyone who did the math at her 70th birthday celebration would have realized otherwise.

“If someone would ask her about her age,” Clauss explained by phone, “she wouldn’t answer or lie; she’d just look at them.” The story of how Miss T dealt with questions about her birth date is corroborated by mezzo-soprano Andrea Baker, currently preparing for her debut as Venus (in Wagner’s Tannhäuser) in Trieste, who studied with Thebom over an eight-year period.

After her retirement, Thebom briefly attempted to run the Southern Regional Opera Company in Atlanta. “It was very hard to break into the good-old-boy male power structure,” says Clauss. “She would have liked to do what Irene Dalis did, and build a company. But that never happened.”

Thebom next moved to San Francisco. In addition to championing the Bay Area Met auditions, she worked with Elizabeth Appling to begin the Opera Arts Training Program of the San Francisco Girls Chorus, circa 1989; it provided an annual three-week program for girls 16 to 18 who had left the chorus and wanted to continue training in opera. Thebom also worked closely with her program administrator, Marilyn Mercur, and stage director Elizabeth Bachman.

“Blanche was quite amazing,” says Mercur. “She was a diva of the old school. There was a certain formality of how you behaved when you with were in the public eye, and she took that very seriously. There was a proper way of comporting yourself, and a way of speaking. Blanche could be very grand. She was a little larger than life, extraordinarily elegant. She could be intimidating, certainly to the young girls in our program, but they loved her when they got over their fear. I think she made a mark in her later years with the training of these young girls.

“She could be very haughty and austere. There was this formidable personality — she was really, really smart, and did not suffer fools gladly. She also kept up with Wall Street, and could have been a very successful investment person. 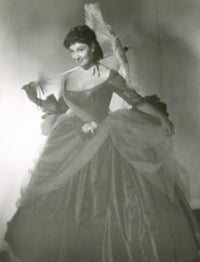 “I recall Blanche was once demonstrating to the girls how to wear a hoop skirt. She did this little song-and-dance routine, and she had such style. She could immediately put herself onstage. That was one of the things that she talked about. Your brain is a computer, you plug it in, and you’re ready to go.”

According to Bachman, who says the program lasted for 14 years, Thebom recruited nationally. “Until the program began, nobody took the teenage girl singers seriously, and they had nowhere to go,” she says. “Blanche was the leader and teacher and inspired them. Quite a few of our students are now out there performing.

“Blanche made her way in a difficult career and changed standards. She was one of the first Americans to make a big career in America. The other side of being haughty and elegant was that she was so smart that she couldn’t understand why people couldn’t keep up with her. But she was always the definition of a class act, and she expected the rest of the world to live up to those standards.”

Clauss, who traveled with Thebom on trips to Italy and France, laments that no one succeeded in getting Thebom to write her memoirs. “We tried everything,” she says, “but she couldn’t deal with a computer or talk into a tape recorder. The last time I talked to her about it, she said her recollections had grown too foggy. But she would have us in stitches telling us about her various costars. She even judged the Miss America contest.”

Thebom’s commercial discography is sorely limited. Among the prizes are her famed Brangäne in the indispensible Flagstad/Suthaus/Thebom Tristan, conducted by Wilhelm Furtwängler; a recently released 1957 performance of Berlioz’ The Trojans from the Royal Opera House Covent Garden, conducted by Rafael Kubelik; a Glyndebourne Così fan tutte with Jurinac, Lewis, and Kunz; aria excerpts on Preiser; and, if you can find it, an English language, studio-recorded Met Così with Eleanor Steber, Roberta Peters, and Richard Tucker, which balances stylistic anachronism with glorious singing.

Amazon.com.uk and other Web sites based in Canada and Europe offer a number of invaluable live Met broadcasts that help fill in the blanks. And while their sound is hardly ideal, YouTube has a rare collection of live Thebom radio appearances from the 1940s. Her gloriously free high-ending to Dalila’s famous “Mon Coeur s’ouvre a ta voix” helps explain why she made a brief stab at soprano repertoire.

The celebrated soprano Lucine Amarra, 85, who continues to perform, sang Micaëla to Thebom’s Carmen, the Celestial Voice to her Eboli, and Eurydice to her Orfeo.

“She was a great colleague,” Amara said by phone. “She was like a friend in the old house. We were a big old family, and we’d travel together on trains and have parties in the parlor cars. I remember Regina Resnik decorating the car with toilet paper, which was all we had onboard for Nicola Moscona’s birthday. We had wonderful times, but when we went to the new house, and everybody went their own way by plane, it was entirely different.

“She had the grand dame air, and she expected people to treat her that way. She was most fantastic in Così fan tutte. There will never be a cast like that again. It was fantastic. As she got older, her voice got throatier. But it was a glorious, pleasing voice in her prime, and she sang Eboli beautifully. I love dark voices. I always used to admire Victoria de los Angeles, with her dark middle quality; she always wished she had my top notes, and I always wished I had her low voice.”

There was also a lighter side to Thebom. Not only did she once appear at a San Francisco Opera Fol de Rol dressed as Lady Godiva, half clad atop a carousel horse with her hair draped down to whatever, but she also dropped all her airs to duet with Steber, in idiomatic English, in Mame. Singer Bruce Burroughs, whose Web site has a page devoted to his friend Blanche Thebom, shares the following story:

“When Thebom and Steber had their first musical rehearsal for the Met’s historic revival/new production of Così fan tutte in 1951, and sang through the opening duet of Fiordiligi and Dorabella for the first time, it went so well that when they were finished, they turned to each other and simultaneously exclaimed, ‘Sisters!’ Toward the ends of their careers, they did a number of joint recitals, and programmed that duet among others — not least in the category being “Bosom Buddies” from Mame (!), their version of which can be heard on YouTube.”

The penultimate word of what has turned into a massive tribute shall be left to mezzo-soprano Andrea Baker (see her Web site). Now 43, and slated to premiere her first Venus in Trieste on April 7, Baker studied with Thebom from 1994 through 2002. For the first 2½ years, they worked together four times a week. After Baker moved to Europe to build her career, where for a while she was known as the “Colored Fricka,” they continued to work together every summer in San Francisco.

Thebom not only was instrumental in helping Baker through her Met audition, but also gave her a significant portion of her stage jewelry, which she wears in her performances.

“She was an extraordinary giving and supportive woman,” says Baker. “She gave of herself, artistically, completely to her students. She was also exacting. She was old school, and made sure you took care of all the business, not just showing up and singing pretty.

“I was lucky enough to be a dramatic mezzo, and working on much of the same repertoire as she sang. We studied not just technique, but also character development. She really wanted to pass down the technique she learned from Edyth Walker. If the technique is used properly, she felt it applies to every kind of singing there is. She taught and perfected a placement, a way of breathing and keeping the voice moving, that is equally at home in Wagner, Verdi, and Bellini. And “Miss T,” or Blanche, as the child of immigrant parents, did not buy into the rule of color and what you should sing according to how you looked. She always championed first the voice, second the artistry, and third the person.”

As I was about to close out this obituary, soprano Roberta Peters called. Peters treasures the time the two sang and recorded Così.

“To be next to her when we were onstage was marvelous,” she said. “Even when I was offstage, I would stand in the wings and listen to her velvety, velvety voice. She was always charming and warm with her colleagues, and had a great sense of humor. That’s how I knew her. She was very dear, and I’m so sorry she’s gone. I think she was so happy in her teaching. God bless her.”