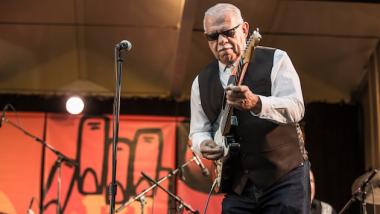 The Monterey Jazz Festival is far more than the longest continuously running jazz event in the world. It’s a vibe and a party, a rainbow tribal gathering, an ongoing improvisation, and a cultural force. Despite widespread imitation across the United States, Asia, and Europe, the event retains a special status that was reaffirmed Sept. 15–17, when the festival inhabited the Monterey County Fairgrounds for its 60th season. Rather than reinventing itself every year, Monterey often highlights its storied legacy, and the diamond edition provided numerous reminders of the festival’s past triumphs and key personalities.

With its sylvan setting, welcoming California vibe, and savvy creative vision, Monterey introduced a new way to experience America’s quintessential art form at a time when the cultural establishment still thought of jazz as part of a shady and somewhat dubious demimonde. Consider the era in which the festival was born. Dwight Eisenhower was well into his second term as president, the Giants had just relocated to San Francisco, and Hawaii was still a territory when San Francisco Chronicle columnist Ralph Gleason and Monterey disc jockey Jimmy Lyons staged the first festival, in October of 1958.

From the beginning Monterey cast a wide net, presenting jazz patriarchs Louis Armstrong, Duke Ellington, Coleman Hawkins and Earl “Fatha” Hines next to (and sometimes interacting with) avant gardists such as Ornette Coleman, John Coltrane, and Eric Dolphy. Under the guiding hand of Modern Jazz Quartet pianist John Lewis, the first African-American musician to hold a position of power with such a high-profile jazz presenter, Monterey’s first decade was marked by remarkably prescient programming.

While the festival eventually fell into a predictable pattern, presenting the same roster of jazz giants in the 1970s and ’80s, it regained its mojo with Tim Jackson taking over the helm in 1992, and he’s steadily made reviewing the event more challenging. With the Jimmy Lyons stage in the voluminous main arena presenting big-name acts like Herbie Hancock, Chick Corea, Leslie Odom Jr., and Regina Carter, and five stages on the grounds (with festival seating), it’s impossible to take in all of action, even with press credentials making it easy to slip in and out of the various venues.

My strategy is to catch as many Bay Area artists as possible and the out-of-town musicians who rarely play Bay Area stages, so I started the weekend early Friday evening at the oak-shaded Garden Stage with East Bay guitarist Ray Obiedo’s Latin Jazz Project playing its singular blend of Caribbean cadences, jazz/rock fusion, and funk. It’s a sleek, seductively shimmering sound driven by the supple electric bass of Marc van Wageningen, who’s back in full force after his near-death encounter with a train while crossing the Jack London Square tracks on his way to a Yoshi’s gig with Tower of Power.

New York drummer Matt Wilson, a bandleader and composer with a long track record of assembling stellar ensembles, presented music from his new CD Honey and Salt: Music Inspired by the Poetry of Carl Sandburg. It’s on my shortlist for one of the best albums of the year, and the music is even better live: funny, trenchant, roughhewn and alive with possibilities. A mix of instrumentals, recitation, and song settings of Sandburg’s verse, the music contains multitudes, pivoting on the contrast between the distilled lyricism of Ron Miles’ cornet and the fervid heat of Jeff Lederer’s tenor sax.

Over in the main arena, the centennial tribute to Dizzy Gillespie, who performed at the first festival and long served as the event’s presiding spirit, fell short of evoking his trickster energy. Led by pianist and NEA Jazz Master Kenny Barron, who made his Monterey debut in 1963 as a 20-year-old pianist in Gillespie’s quintet, the set featured various combinations with his trio, trumpeters Roy Hargrove and Sean Jones, and conga master Pedrito Martinez. Everyone played well, but the set needed a dose of Diz’s anarchic energy. Instead, Barron’s elegant, caressing rendition of Gillespie’s ballad “Con Alma” provided the set’s most affecting moment.

Sean Jones, the powerhouse trumpeter in the SFJAZZ Collective, delivered a commanding set that climaxed with “The Ungentrified Blues,” a cutting, low down lament. Spiritual succor was the theme of bassist John Clayton’s festival commission, Stories of a Groove: Conception, Evolution, Celebration. His third time getting the MJF assignment, he rose to the occasion and delivered one of the more memorable commissions since Tim Jackson reinstated the program in 1994.

Pairing the Clayton-Hamilton Jazz Orchestra, which he co-leads with his brother, saxophonist Jeff Clayton, and his best friend, drummer Jeff Hamilton, and his son, pianist Gerald Clayton, provided a vast array of tonal colors. And the fact that he was working with intimately familiar ensembles allowed him to write for specific voices. He introduced the eight-movement work by referencing our roiling political divide, and the cathartic piece moved through dismay, despair, and anger to healing and beatific joy with the trio and orchestra melding and separating throughout the set.

Walking out of the arena with a musical buzz, I plunked myself down in the Pacific Jazz Café and got higher still from a revelatory set by pianist and newly minted NEA Jazz Master Joanne Brackeen with bassist Ugonna Okegwo and drummer Rudy Royston. At 79, she’s lost none of her improvisational daring do, playfulness, and bottomless flow of ideas. Paired with the melodically inventive rhythm section tandem, she turned “It Could Happen to You” into delirious, broken-field steeplechase in 7/4.

Sunday’s program rushed by in a series of musical epiphanies. Bassist Linda May Han Oh’s Garden Stage set with her quintet made a convincing case for her status as one of jazz’s most original young(ish) composers, with sinuous tunes that often paired her wordless vocals with serpentine bass lines. The Berkeley duo Amendola vs. Blades, which pairs drummer Scott Amendola and Hammond B-3 organist Wil Blades, offered a master class in the manipulation of groove. Bay Area B-3 great Chester Thompson followed them with a fierce quintet that served as a launching pad for the brawny tenor saxophone flights of Howard Wiley.

My festival experience concluded with a flood of pianistic prowess, starting with a quietly spectacular set by Spanish flamenco jazz innovator Chano Dominguez’s trio. In the arena, Chick Corea and Herbie Hancock renewed their four-decade piano duo partnership seated facing each other across two huge Yamaha and Fazioli grand pianos. Taking evident delight in trying to anticipate each other’s moves, they infused every piece with kaleidoscopic curiosity, breaking Cole Porter’s “Easy to Love” into dozens of pieces and then reassembling it. They ended with an extended investigation of Hancock’s oft-sampled “Cantaloupe Island,” that referenced the famous hitched groove without fully committing to it. I had just enough time to hustle over to the other side of the fairgrounds to catch the last 10 minutes of pianist Vijay Iyer’s talent-laden sextet, more than enough time to convince me the band’s January 20 performance at the SFJAZZ Center is one of 2018’s can’t-miss shows.

Jazz Widens Its World at Monterey

The jazz festival, loaded with talent and star power, makes the day of SFCV’s intrepid reporter.

Musical genres are concepts that may be crawling toward extinction in the new millennium, or so pianist Billy Childs believes. Looking to a more integrated era, he’s positioning his jazz quartet alongside the classically trained Kronos Quartet for the premiere of his commissioned composition, on Sept. 18 at the Monterey Jazz Festival.

It’s not just about the big names. When the 53rd Monterey Jazz Festival swings into action on Friday, Sept. 17, ten gifted high school–age ensembles will feature prominently on the grounds and main arena stages. Their appearances constitute but one aspect of a comprehensive jazz education program.