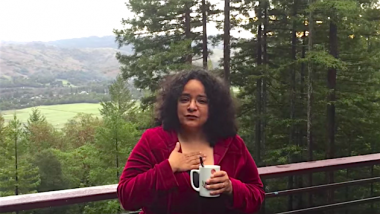 At home on farmland 115 miles north of San Francisco in Boonville, California, pianist and composer Gabriela Lena Frank is surrounded by and attuned to sounds typical of a rural childhood. On the day and night before a generous, nearly 90-minute phone interview, frogs croak like crazy, clucking chickens provide a constant sonic backdrop, and the steady beat of hammers and other handheld tools can be heard. Indoors, the soft rustle of laundry being folded, fingers rubbing oil on cutting boards, and rare rest periods during which outside sounds continue to ripple through the semisilence are interrupted only by Frank’s listening to work composed by a former teacher, William Bolcom. “Yesterday, I was cleaning house and put on his Songs of Innocence and Of Experience that’s based on the poetry of William Blake,” Frank says.

Bolcom in composing the work took idioms from popular American culture and tied them to voice. Aiming for something similar in the opera she is midway to completing, Frank is careful about what she listens to while composing a new piece. “I look for a reset, for inspiration. I don’t sound like Bolcom, but I can see his episodic unfolding of the poems. I let my mind react to it in an organic, less studious way while I cleaned. It’s a wellspring of experience to draw on.”

As if she needs one. Proliferative is a word that might have been invented expressly for Frank. “I’m the opposite of writer’s block,” she admits, with typical humor.

Perhaps the richness of her urban upbringing in Berkeley explains the 45-year-old composer’s hands-that-stir-many-pots activities and achievements. “My father [Michael Frank, an editor of the acclaimed Autobiography of Mark Twain] is a writer. I’d be tinkering on a piano and could hear his typewriter in the back room. Upstairs, my mom Sabina Frank who’s a stained-glass artist, would be grinding glass. Outside, my brother would be throwing sticks and rocks because he’s fond of nature and natural life. It was a cacophony, but there was distance between us, so the space was there. My husband [mountain man, builder, property manager, farmer Jeremy Lyon] and I have a din of sound in our daily lives too.”

Frank is the winner of a Latin Grammy and recipient of a Guggenheim Fellowship and a United States Artist Fellowship. She is the subject of several books and documentaries, has been commissioned by cellist Yo-Yo Ma, soprano Dawn Upshaw, the Kronos Quartet, and others, and her work is in the repertoire of major American orchestras. Apu: Tone Poem for Orchestra was commissioned by Carnegie Hall and premiered by the National Youth Orchestra of the United States under conductor Marin Alsop. Fort Worth Opera will premiere Frank’s The Last Dream of Frida in 2019–2020, with a subsequent performance by co-commissioner San Diego Opera.

In 2017, Frank founded the Gabriela Lena Frank Creative Academy of Music. The nonprofit training institute offers emerging composers short-term retreats during which Frank directly mentors professional development and offers readings of works in progress, public concerts, and recordings made by local radio stations of the finished pieces. While in residence — the composers stay in Frank’s two homes on the property — they participate in outreach activities at schools with low access to art and at a local adult education center.

Concerts this year in Portland, South Carolina, and next year in Berkeley, Baltimore, and Massachusetts expand the program. A future plan includes reducing the pool of composers — this year’s flow of 26 composers will slow to about 15 — and an initiative to supply grant funds or commissions for alumni. “I don’t want this to become too big,” says Frank. “I’ve been able to be invested in each composer, understand their style, stay in touch. I’m starting a fund for when [the composers] are out of this world; for investing in them after they leave. I’m starting an orchestra reading program that will be open only to alumni. To have resources for all of these composers, it would be easier if I slow the numbers down.”

Not one to easily slow herself down, Frank was forced to put on the brakes several years ago after being struck by Graves disease, an autoimmune condition. It depleted her energy, consumed six years — “Four acute and two in recovery,” she says — and destroyed most of the sight in her right eye. “It gave me a sense of my mortality. I had to make careful choices if I wanted to have maximum impact with my art. But the brain is amazing, you know? Both of my eyes are open and I think I’m seeing out of both eyes, when my right eye is actually blind. The pain is still constant, but low level.”

Frank describes the unrelated hearing loss discovered when she was a child as “high-moderate to profound hearing impaired.” Blessed with perfect pitch and naturally sensitive to sound, she’s matter of fact. “I’m just missing volume, but music is about so much more than that, which is just an entry point. I do lip-reading, which helps me a great deal.”

Happiest when speaking not about personal physical attributes but about philosophies and practices applied to composing and the academy, she says, “I’m a good matchmaker.”

In her work, matchmaking translates most recently into the new opera, which uses as inspiration words written by her frequent collaborator, Pulitzer Prize-winning playwright Nilo Cruz. “The opera is about Mexican artists Frida Kahlo and Diego Rivera. Last week, I was generating material while looking at Nilo’s words and not judging it. Frida has died and Diego gets to visit her spirit. Their moment of reunion, Diego says only, ‘Frida.’ I came up with saying it quietly, saying it while separating syllables as if the air disappears between them as he is surprised, saying it loudly as if he’s astounded; reluctantly as if he doesn’t want to see her. I’ve said it with brass, strings, percussion, silence. I’ll need time to see what’s appropriate.”

Mastering the mystery of orchestral works has taken not only time, but courage. Frank formerly saw herself as a chamber music composer. “In the last five or six years, I see a new leap of my artistic growth in understanding the orchestral medium. I wrote some bad pieces before I learned to make something sing beautifully with 100 people rather than with four or five. It took time to learn to say something with a mix of brass, woodwinds, and strings without it sounding like a mess. To get the kind of fitness and clarity of line — it takes a lot to corral all of those things together and produce something that sounds coherent.”

Sophisticated blending extends beyond the stylistic and structural influences Frank’s work sustains in its fusion of her American-Peruvian-Chinese-Lithuanian-Jewish ancestry and classical music training she received while earning a B.A. and M.A. at Rice University and a D.M.A in composition from the University of Michigan. In terms of curating for the academy, she says, “I pick the right people, which means I don’t have to do too much in terms of artistic quality. People respect the deadlines, there are no attacks on anyone’s aesthetics, cultural background, race. We have a 62-year-old civil rights attorney, college professors, [well-known] musicians. They all have talent and essential humanity that means people get along well and come without expense to the music-making.”

Asked who she’d like to include in future cycles, Frank says, “Women, people of color, people who’re centered in jazz — I want everybody. I know there are cultural backgrounds unfamiliar to me that I’d like to have come. I want to give a picture of classical music looking like this: multicultural, multiracial, multinational, all classes, mixed races. I hope to empower these composers to go out and believe they belong everywhere, even in environments not as multicultural as we’d like.”

Live performances and digital/online experiences she says are in a dance that has yet to find sure footing. Frank is encouraged by millennial composers creating live events instead of music to be digested on an iPhone, and she speaks enthusiastically of artists resurrecting throwback formats such as cassette tapes and vinyl. She says, “Personally, I say share it in a lot of forms. I prefer concerts over CDs, but for practicality, I’ll take that MP3.”

Frank believes that classical music isn’t disrespected by the infusion of new, diverse voices in some of her works, including her “I-wasn’t-born-in-Peru-but-this-is-what-I-imagine-this-crazy-Peru-land-is-like” theme that she says permeates some of her pieces. “I say this with great reverence for Beethoven and Bach; I don’t feel they’d feel that classical music was degraded. What’s happening in the arts world is mirroring questions we’re asking everywhere. I believe classical music needs to make an effort to include diverse voices, but it doesn’t mean it comes at the cost of the past,” she says.

Before the 2016 presidential election, Frank, who takes seriously her role in arts citizenry, says she knew Donald Trump would win. “I was seeing hostility. Afterward, I needed to do something. I knew I wasn’t going to run for office. Sure, I could get out the vote. But since my greatest strength was in what I could offer through music, I could inspire, encourage, and say, ‘Stay strong during bumpy years,’ through the academy.”

Looking out from the deck on her home, taking time to appreciate the beauty of the valley sprawling below her and the school that is a sign of the times and that has changed her life, Frank says music, because it consolidates humanity, is cause for optimism.

Berkeley-born Gabriela Lena Frank is on a roll, with her compositions being performed widely, even as she serves the Berkeley Symphony as its creative advisor. Her upcoming first violin concerto, Hailli Lírico, is drawn from poem-prayers uttered by Inca kings.

The creative bond behind a new oratorio commissioned by the San Francisco Girls Chorus explains the genesis of the work and their interest in women of the Bible.