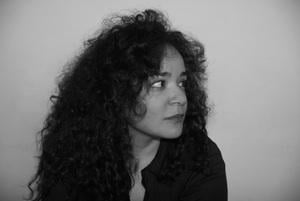 For many composers, the challenge of getting new music performed can be the work of a lifetime. Gabriela Lena Frank seems exempt from that struggle. In recent years, Frank’s music has been played in concert halls across the country; this season alone, her works have been performed by Chanticleer, the King’s Singers, the Del Sol Quartet, the San Francisco Symphony Youth Orchestra, and the Berkeley Symphony, which last year named her to the post of creative advisor. 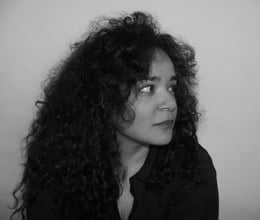 This month, Frank unveils her first violin concerto, titled Hailli Lírico (Lyric prayer). It was written for Robin Sharp, who will premiere the work May 7 with the San Francisco Chamber Orchestra under Benjamin Simon.

Frank, 37, was born and raised in Berkeley, and still calls the city home. Her demeanor suggests the laid-back style the rest of the world associates with the Bay Area: A self-described “nerd,” she goes to aerobics class with her mother, and shops her local farmers market. (When I arrived to meet her at a pub near UC Berkeley, she was poring over a stack of cookbooks — an avid home chef, she avoids processed foods.)

Inside that relaxed exterior, though, is an artist charting a clear path, and she spoke enthusiastically about the new concerto, her work at the Berkeley Symphony, and her plans for the future. She’s particularly excited about Hailli Lírico, which had its inception at her first meeting with Sharp in 2002.

“We met in a swamp in Florida,” said Frank, “at an artists colony called the Atlanta Center for the Arts. I wasn’t that long out of school, and I wasn’t sure what to expect. But there were some phenomenal people there. The composer was Bright Sheng. He brought in five or six really fine performers, and one of them was Robin. We worked together and really hit it off.” Sharp, a frequent collaborator since then, and SFCO’s concertmaster, asked Frank to write her a concerto. The work was to be in memory of Sharp’s late father, Terry E. Sharp.

For various reasons, Frank put the request aside, but never quite forgot it. “The idea stayed with me through a period of eight years, during which time I developed a lot,” she says. “That time, when you’re coming out of school, becoming a young professional — every piece pushes you in a new direction. I think that’s normal for many artists, not just composers: You see them bumping into walls, trying something else, picking up skills. So the idea stayed the same, but the genesis kept changing.” Inspiration finally came in a set of arcane poem-prayers used in ceremonies by Inca kings.

Written for string and percussion, Hailli Lírico is composed in a single movement lasting about 19 minutes. “There are some flavors of indigenous Latin American music in it,” says Frank, “but they’re very subtle, the way you can identify it in, say, late Bartók.” The score, she adds, is unlike anything else she’s written: “It’s much more improvisatory, more through-composed. It’s very unadorned, and very virtuoso. Robin is singing the entire time. She has very little break, and she’s really driving the piece.”

Frank, who is composer in residence with the San Francisco Chamber Orchestra, often draws on Latin American musical forms. She doesn’t shy away from melody, and says she’s always surprised to hear herself described as an untraditional composer. “I think I’m very traditional,” she says. “I like the old classical guys and I like the old forms. When I mine Latin American idioms, I’m mining from forms that have really taken root. I’m actually very old-fashioned.”

While Frank is based in Berkeley, her roots reach around the globe. Her mother, a stained glass artist, is of mixed Peruvian/Chinese descent; her father, a Mark Twain scholar who was instrumental in establishing the Twain archives in Berkeley’s Bancroft Library, is Lithuanian-Jewish. Her brother, Frank notes with pride, was the first Latino to graduate from Stanford University with a doctorate in neuroscience.

Frank attended Berkeley High School (one of her teachers, Stuart Gronningen, is Berkeley Symphony’s principal horn; “I still can’t call him ‘Stuart’,” says Frank. “I call him ‘Mr. Gronningen’.”) She studied composition and piano at Rice University — piano remains her principal instrument — and earned a doctorate in composition at the University of Michigan, where her teachers included William Bolcom.

She was scarcely out of college before the commissions started coming, with ensembles such as the Kronos Quartet, the Seattle Symphony, and the Los Angeles Philharmonic playing her music.

Ten years ago, though, her career hit a stumbling block. Frank was diagnosed with an autoimmune disease that was manifested in an array of bizarre symptoms, including fatigue and blurred vision. She underwent a series of tests, surgeries, and radiation treatments, but lost most of the sight in her right eye. “I lost about two and a half years at the piano,” she says. “I couldn’t play at all. The keys would just swim in front of me.”

Today she’s feeling fine, though she’s still prone to fatigue. She travels less, exercises more, and limits her time in front of the computer.

Boost From a Musical Sister

The post at Berkeley Symphony, she says, came at exactly the right time. Frank has found a powerful ally in the orchestra’s new music director, Joana Carneiro (who succeeded Kent Nagano in 2009). Carneiro and Frank had worked together when both were in residence at the Los Angeles Philharmonic.

Carneiro, recalls Frank, “was intense even then. She wasn’t afraid. And she was the first conductor I felt totally safe with. Usually I worry that they’re not going to hear this or that, or the tempi will be off. But it felt like she was reading my mind, that she could pull out music I couldn’t even hear. Composers absolutely need that — we don’t know the possibilities of our own music.”

When Carneiro arrived in Berkeley, she called Frank to ask for help. “I wasn’t sure what she meant,” says Frank. “I said, ‘You want me to help you find an apartment?’” Instead, Carneiro offered her the position of creative advisor.

Asked what the job entails, Frank says her goals are to raise Berkeley Symphony’s national profile, enhance the organization’s Web presence, and retool Under Construction, the Symphony’s new-music reading series. Mostly, though, she wants to promote the work of young composers.

She’s uniquely qualified for the latter task. As a youthful composer who has taken new works from readings to rehearsals to premieres, she knows the drill. “A lot of young composers don’t even know what an orchestra rehearsal is like,” she says.

Carneiro says that Frank came on board with a wealth of ideas. “Gabriela has already had a tremendous role in programming, connecting with the community, and very specially in helping us shape our commissions and prepare for our creative future,” the conductor commented via e-mail. “She brings structure and great imagination. Her experience with emerging composers is incredible and profoundly affecting our Under Construction program already (and will very much do so in the future). I feel very lucky to call her my musical sister.”

Frank, who serves on the board of the American Music Center, a national service organization for composers, says that young composers also need guidance on how to cultivate a working style. “I don’t think we talk enough about the creative habit,” she says. “How do you get your ideas? It’s not so much the act of putting it down on paper, which can be terrifying for someone coming from zero. Composers need to be told that they can be imaginative. We don’t talk about that, coming from the conservatory.”

Frank says her own creative habit nurtures her work. “It’s not just that I’m a full-time composer,” she says. “I love reading what great writers do. I carry around a notebook and write stuff down. I’m always collecting. When I stop at the end of the day I never stop at the end of something, I stop in the middle so I can pick it up the next day. I have a lot of spillage left over from my pieces, things that wind up on the cutting-room floor. Over the 10 ten years, I’ve collected all those scraps in binders. I don’t show them to people, but they’re all little pieces of magic. So I never start with a blank page anymore, and I never suffer from writer’s block.” She’s always working, she adds. Current projects include a new piece for Yo-Yo Ma and the Silk Road Ensemble, plus a song cycle for soprano Dawn Upshaw and the St. Paul Chamber Orchestra, with texts by Nilo Cruz.

Whatever comes next, Gabriela Lena Frank seems able to take it in stride. She may be the rarest of artists — a prolific composer with a secure home base. “I’m a Bay Area composer,” she says. “I love it here, and I can’t imagine living anywhere else. Really getting involved here these last few months has been great. I have to get used to getting recognized at aerobics class and the Berkeley Bowl. But it’s been a real joy.”