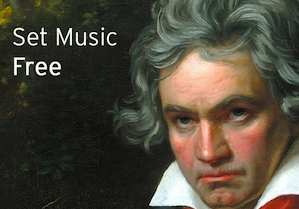 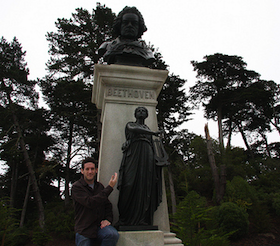 In 2006, when Aaron Dunn was a young music student and bassoonist at Skidmore College in Saratoga Springs, N.Y., he saw something that shocked him so much, it ultimately changed the direction of his life.

“The janitors would take trash bags filled with the recordings we’d made and throw them out,” said an appalled Dunn, speaking recently from his home in Palo Alto. “It seemed such a shame, and I couldn’t imagine how many other students had seen the same thing happen.”

Instead of simply shrugging his shoulders and accepting the incident as just another Kafkaesque example of college reality, Dunn decided to delve deeper into the matter and explore how recordings of that kind could become a valuable resource instead of material for the local landfill.

“That made me start researching the whole issue of domain law,” he said. “And that’s when I realized it might be possible to create a totally public, copyright-free resource of classical music recordings.”

The result is musopen.org, Dunn’s website devoted to the production and distribution of copyright-free classical recordings, sheet music, and educational materials. 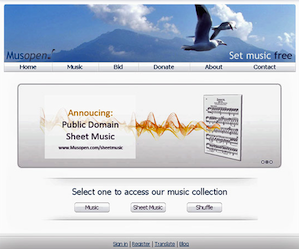 According to Dunn, when he launched Musopen in 2006, it went nowhere. It wasn’t until 2010, when he cleverly rebranded the site under the banner “Set Music Free” on Kickstarter.com (a website that unites project producers with would-be patrons), that Musopen became an overwhelming hit (literally and figuratively). It surged past its initial monetary target of $11,000 in days. Since then, contributions have flooded in, making it by far the most successful classical music offering on Kickstarter and a poster-child for the website’s concept. Currently Musopen’s contributions stand at $68,630, with a donor base of 1,276 backers. Today the site offers 150 gigabytes of downloadable, copyright-free music on 1 to 2 terabytes of bandwidth.

The library contains 192 self-produced recordings (many by the Czech National Symphony Orchestra and a conductor Dunn refers to as “He Who Must Not be Named”). The site offers recordings by 170 composers (171 if you count that shy Anonymous), which run the gamut from Bach’s Goldberg Variations to symphonies to piano and choral music by composers ranging from the classical greats to Gavin Bryars, Arvo Pärt, and Andrew Lloyd Webber.

“I realized it might be possible to create a totally public, copyright-free resource of classical music recordings.” – Aaron Dunn

Taken together they represent 17 hours of copyright-free music that members (who pay a basic rate of $50 a year) can download and use for whatever purpose they desire: whether for educational listening or study, or to provide a rights-free soundtrack for their latest independent film or YouTube video.

As explained by Duncan Geere, writing in the Aug. 26, 2010, edition of Wired, most classical musical copyrights are held by orchestras, not composers:

The copyright of a composition is entirely independent of the copyright of the recording of that composition. While this allows the original writer of a song that’s covered by a more famous band to get paid, one side-effect is that you can end up with centuries-old public domain music still locked away because the recording of that music (from a modern orchestra) is under copyright.

This is the very issue that Musopen addresses, explained Richard Esguerra (Aug. 25, 2010), writing on the Deeplinks blog at the website of a public access advocacy group called the Electronic Frontier Foundation:

Musopen is asking backers to join an effort to hire a world-class orchestra to record sublime digital performances of the symphonies by the composers mentioned above. Musopen will then relinquish all rights to the recordings, giving the public the freedom to experience these works in full: to download, share, derive, and remix without limit.… It’s too bad such seminal, cultural works have been effectively buried by copyright interests — despite their age, ubiquity, and importance. … The Musopen campaign presents a creative solution that could help ensure that such essential music is preserved and shared for generations to come.

The Tricky Part: Making the Recordings

Another innovative feature of Musopen is its bidding system. Backers are allowed to pledge contributions toward the recording of specific compositions. When the necessary amount is raised, a professional musician is hired to perform the piece. Much of the money, Dunn said, is raised in small donations, with a $5 average contribution. But the site also lists 11 premier donors who give $1,000 or more.

Dunn (who attended the forward-looking Oakwood School in Los Angeles) was just 22 when he decided to launch Musopen. Now, at 28, he’s a seasoned music producer with a multitude of recordings under his belt. And it was the success of that 2010 Kickstarter launch that set his recording plans in motion. Selling his vision of a copyright-free musical future to orchestras abroad, however, was a different matter.

“My dream had always been to hire musicians to record specifically for Musopen, and then to put those recordings in the public domain,” said Dunn. “I looked up the minimum it would cost to hire an orchestra. And it was something like $15,000. When the Kickstarter campaign took off, I looked to Eastern Europe, but I discovered there were lots of shady practices there: phony rate-cards, questionable recordings as to who actually made them, and more.

“At one point I was very close to getting the London Symphony, but they wanted to record four hours for every 20 minutes of actual music, even if they could play a piece perfectly in an hour,” Dunn explained, clearly exasperated. “It would have been a huge waste of money.”

“I wanted to maintain the highest quality standards and offer our members the best user experience. A major focus of Musopen is increasing interest in classical music.” – Dunn

When Dunn set his sights on the Czech National Symphony Orchestra, they were skeptical of what he wanted.

“They wanted to work the same way. And I said, ‘Let’s pretend this is a live concert. We’ll play through everything twice and edit the best parts together.’ I tried to explain to them about Kickstarter and Musopen, but they had no interest. At the same time, I felt guilty, because I had all this money from members that was way beyond what I had asked for. In the end, the Czech musicians said, ‘Just tell us what you want us to play.’ The first project was the Brahms symphonies. Over time, we’ve developed a real relationship. But I still have to push them. They’ll stop with an hour left on the clock. And I tell them, ‘No, we’ve got time to do another piece.’” (Several of these Musopen recording sessions can be seen on YouTube.)

As Musopen’s library of recordings has grown, Dunn said he has conducted the equivalent of “blind tastings” in which he plays recordings by “his orchestra” and then the same piece by a famous ensemble. In many cases, he said proudly, the performances Musopen produced were chosen as the better ones.

Another interesting fact about Musopen is that a survey of its members showed that many are not fans of classical music and that was not why they donated to the site. They donated, they said, because “they liked the cause.”

“I have no objections to people protecting their work,” said Dunn definitively. “I think they have every right to do that; I would, if I were trying to make a living off of it. But I think copyrights should be limited to a person’s lifetime.”

Dunn is also fond of quoting Beethoven on the subject of artistic access: “There ought to be but one large art warehouse in the world, to which the artist could carry his art-works and from which he could carry away whatever he needed.”

Since the launching of Musopen, several other websites that offer copyright-free material have emerged, including Royaltyfreemusic.com, AudioBank.fm, and soundzabound.

Even so, Dunn said, he feels Musopen stands apart.

“There are quite a few sites out there now. Some are more wiki-based [a website that allows its users to add, modify, or delete its content via a Web browser, usually using a simplified markup language or a rich-text editor]. I didn’t want to use that model. I wanted to maintain the highest quality standards and offer our members the best user experience. A major focus of Musopen is increasing interest in classical music. That’s not what those other sites are really about.”