A New Tune at SF State?

When Hafez Modirzadeh heard San Francisco State University President Lynn Mahoney’s soaring words about the school’s commitment to equity, diversity, and racial justice at the opening convocation in August, he decided to put the institution to the test.

The School of Music’s only tenured professor versed in non-Western traditions, he’s long felt that the highly diverse student body was ill-served by the program’s Eurocentric focus, which is reflected in both faculty hiring and course offerings. He laid out a far-reaching agenda to transform the school’s curriculum and overall pedagogy in a letter that circulated within school (and then found a wider audience when saxophonist Francis Wong posted it on Facebook). 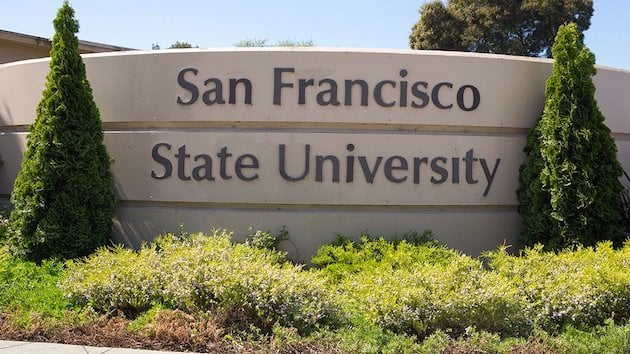 With the clarion call of the Black Lives Matter movement ringing in the background, Modirzadeh described the SFSU music program as fettered by “a deep intergenerational upholding of that archaic ‘separate but equal’ logic that miseducates, leaving our students perpetually revolving around a musical caste system stuck thick in ethnic myopia.”

A saxophonist and composer who has collaborated with some of jazz’s most celebrated and influential artists, Modirzadeh seems to have struck a chord. A series of meetings between students and faculty amplified his call for change, and School of Music Director Cyrus Ginwala announced on Oct.13 the creation of a task force made up of faculty and both current and former students to look at every aspect of the program’s offerings.“We’re in transformative times,” Modirzadeh said. “Not everyone is in agreement, but we’re having a dialogue. It’s not simply that we teach all these white male composers and we need to include some Black composers. We’ve got to address the full-time/part-time caste system. Now we’re discussing how to redistribute our teaching units, which comes down to income.”

Modirzadeh is the first to acknowledge his privileged position as a tenured professor who can advocate for radical changes without fear of unemployment. His diagnosis of the music school’s systemic inequities borrows a term recently applied to American racial history by Pulitzer Prize-winning journalist Isabel Wilkerson in her new book Caste: The Origins of Our Discontents.

Describing the music school as beset by casteism, he wants to change not just how and what traditions get taught. Inextricably linked to the dominance of European classical music, he says, is the way that lecturers and adjunct faculty are kept in line by the lack of any job protections.

“First class and second class is the crux of the matter,” Modirzadeh said. “We can jostle around issues of race, but it comes down to structural inequities, and a culture where lecturers are treated as second-class citizens. The university system is a microcosm of other systems. There’s no time for anybody to trip on guilt.” In many ways Modirzadeh is also questioning the academic and intellectual divisions between music departments that center Western practices and theory, and ethnomusicology, which embeds the study of non-Western traditions within a wider view of cultural practices.

It’s a debate that has roiled music departments since the summer, when academics like CUNY music theorist Philip Ewell called on his field to dismantle its “white racial frame” while unpacking the racist assumptions of foundational music theorist Heinrich Schenker (1868- 1935) in this widely discussed article. For Ginwala, who recently started his second three-year term as the School of Music’s director, the student experience is his primary focus. He emphasizes that discussions about equity and inclusion are just getting started, but the end result has to focus on student success.

“What do you need to do to attain and graduate student musicians with a curriculum where they see themselves represented and they’re successful once they leave?” Ginwala said. “That’s the lens to rethink what we’re doing for the students we actually serve.”

With 11 full-time professors and some 30 adjuncts, the music department’s faculty is overwhelmingly dedicated to Western classical music (despite a handful of jazz artists). Flutist/percussionist John Calloway has led the Afro-Cuban ensemble class at SFSU for more than two decades. A lone voice in the School of Music for a spectacularly rich tradition with an extensive following in the Bay Area, he sees a longstanding dynamic where classical music courses get the lion’s share of support and everyone else gets crumbs.

“If you’re just offering one class in mariachi or highlife and there’s no training like what you’d get in Western European music, the likelihood of it being rigorous is slim,” he said.

Calloway says he’s hesitated to make waves in the past, but with Modirzadeh’s letter he felt he had to weigh in. “I’ve never felt an overt threat about speaking out, but the culture of being a lecturer is that you have less rights and serve at the pleasure of school,” he said. “It’s the old system. No one’s mean to you, but if you start rocking the boat, people get scared. That’s what’s happening now.”

The music school isn’t the only SFSU program undergoing a reckoning, according to SFSU Asian American Studies Professor Wei Ming Dariotis. But the school of music has been on her radar for some two decades, “through what I’ve heard both from colleagues and students,” she said.

“One of the principles we use is inclusivity and belonging,” continued Dariotis, who is a member of the newly created music department task force via her position as faculty director of the Center for Equity and Excellence in Teaching and Learning. “Unfortunately, I’ve heard stories from students that their vocal style was not something that could be supported in the School of Music. In particular, students who sang with more of a gospel style, typically students of color, quite often Asian American students.”

Mali Carter, an aspiring jazz pianist from Oakland who graduated with a bachelor’s in music from SFSU in 2016, describes a troubled student career with a lack of support at almost every level. She felt dismissed by several faculty members and isolated academically. “Within the music department I was pretty much the only Black woman jazz pianist,” she said, adding that it wasn’t until she connected with Modirzadeh that she had an ally in seeking an alternative path to the degree.

“He stepped in and was a real mentor for me when I was having lots of trouble in the music department being treated fairly,” Carter said, “It was a hard-fought degree to get. I ended up taking some modified theory classes, as opposed to Western theory.”

Whatever problems might exist in the School of Music, the program continues to attract top-flight student talent. San Francisco native Sam Reider, a pianist and accordionist steeped in jazz and an international array of folkloric traditions, moved back to the Bay Area from Brooklyn in December. He’s performed around the world under the auspices of the U.S. Department of State as a musical ambassador, engaging in musical exchanges with artists in China, Laos, Vietnam, Estonia, Turkey, Azerbaijan, and beyond.

Grounded by the pandemic, he decided to pursue a master’s degree in composition at SFSU to develop techniques as a composer and orchestrator. He’s looking to use the tools of European classical composition in his work with folkloric artists.

“I see cross-cultural collaboration as a potent way forward in this discussion of what constitutes American culture,” said Reider, who’s releasing an album next year with Venezuelan cuatro master Jorge Glem and special guest Paquito D’Rivera, the legendary Cuban reed player. “If I was designing my perfect music program it would align closely with all the things in Hafez’s letter, with an equitable distribution of resources for traditions from Africa, Asia, the Middle East, South America, in conversation with European classical music.”

The School of Music’s history embodies the conflicting impulses that are playing out once again in the era of Black Lives Matter. Jazz is now a well-established part of the program, but the school’s most famous and influential graduate, saxophonist John Handy, faced outright hostility as a student in the 1950s. He had already made a series of epochal recordings with bassist/composer Charles Mingus in 1959, including the Columbia albums Mingus Ah Um and Mingus Dynasty, when he endured a Kafkaesque ordeal in which hostile professors and staff undermined his progress toward a degree.

“I took every course they had to get a B.A.,” Handy told me in an interview several years ago. “I finally graduated at the age of 30 and I had 174 units. But you never forget your alma mater, no matter what happens.”

By the late 1960s, in the wake of the Third World Liberation Front Strike, SFSU was looking to diversify the faculty, and the School of Music hired Handy to teach a jazz history class. He held the position for more than a decade, often turning students away from the over-subscribed course. After he retired, Handy was invited back as an artist-in-residence, while Keith Morrison, then dean for the College of Creative Arts, saw to it that the school honored Handy with two jazz festivals in his name.

Handy served as a mentor for Modirzadeh when he joined the SFSU faculty in 1998, and has continued to provide guidance throughout the years. Given his pioneering work with Indian sarod master Ali Akbar Khan, Handy provides an ideal model for the spirit of inquiry and openness that could guide his alma mater’s evolution. There’s no consensus amongst the faculty about what kind of changes should be made. The faculty is an uncomfortable place,” Modirzadeh said. “It’s not personal. It’s structural. We’ve got brilliant, devoted faculty. Many are second to none in their fields and great artists who are loved by their students. We’re at this beautiful moment, but we have to trust each other.”

SF Conservatory of Music Puts Muscle Behind Commitment to Inclusion

Partnering with the San Francisco Symphony, SFCM creates a groundbreaking commissioning program, as well as other inclusion measures.

Musicians Who (Hip) Hop Career Barriers, Even the Pandemic

The difficulties for musicians have rarely been greater than now, but here are three who have never backed down from a challenge.