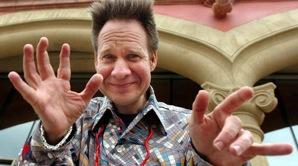 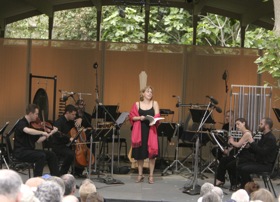 This year’s festival, running June 9–12 (conceived by Artistic Director Thomas Morris, Music Director Dawn Upshaw, and Director Peter Sellars), will continue the tradition. But an important new element will be added to this year’s event — the unveiling of an entirely new stage and seating arrangement for the bucolic Libbey Bowl in downtown Ojai.

Gone is the funky old band shell and in its place will be the new stage (though with a similar look), designed by David Bury & Company. But what is certain to please audience members even more is the long-overdue replacement of the notoriously uncomfortable benches in favor of individual seating. Entering the bowl will also present a new experience as the crowd passes through a musical “Sound Arch” of resonating tubular design by the sound-sculptor called Trimpin.

In addition, this year marks the beginning of a new outreach event produced in collaboration with Cal Performances. Titled “Ojai North,” this three-day minifestival (June 13–18) will be presented at Zellerbach Hall and Zellerbach Playhouse on the UC Berkeley campus. It will reprise the principal concerts from Ojai featuring soprano Dawn Upshaw, the Australian Chamber Orchestra, and the Maria Schneider Jazz Orchestra. 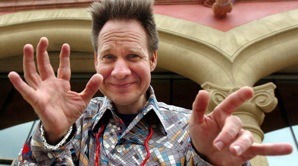 “The advantage,” says Morris, “is that it expands the brand of Ojai while offering the musicians an opportunity to perform these pieces for a second time. There is also a practical side, because by coproducing commissions and performances with Cal Performances, we can produce a festival that we could not otherwise afford.”

For those who have never made the trip to Ojai, the small town, with its Spanish-style arcade, nestles in a picturesque valley 90 miles north of Los Angeles. It is framed by towering mountains and surrounded by orange and olive groves. And at sunset, Ojai is famous for what is known as “the pink moment.” It’s not surprising that the valley served as a stand-in for Shangri-La in the 1937 film Lost Horizon.

“What attracts me so much to Ojai are its two compelling communities,” says Peter Sellars. “There are those who have chosen to live there who are focused on culture and a quality of life that’s filled with a lot of serious content. And then there are the people that make the pilgrimage to Ojai who are also in search of real, serious content. It’s a beautiful place where your senses come alive. So it’s serious and, in the best sense, relaxed.”

The first time Sellars affixed his mark to the Ojai Music Festival was in 1992, when he collaborated with Pierre Boulez on a uniquely topical staging of Stravinsky’s musical play A Soldier’s Tale.

“It was immediately after the L.A. uprising [following the Rodney King trial verdict], and you couldn’t shake those images,” Sellars recalls. “I didn’t want us to think of Ojai as an escape, but rather as a place to stop and consider what was happening within a larger perspective. It was very intense.”

Performed on the back of a flatbed truck (parked on stage), the performance featured an all-black cast led by two lady rappers, T-Love and Suggah B, who served as narrators. In the words of Ojai historian John Henken, “Sellars transformed a traditional Ojai piece into a post-riot commentary on capitalism and militarism.”

This year Sellars is again poised to make a strong political statement at Ojai by focusing attention on America’s wars in Iraq and Afghanistan. The musical lens will be George Crumb’s 2004 song cycle, Winds of Destiny featuring Upshaw, pianist Gilbert Kalish, and the percussion ensemble Red Fish Blue Fish. Inspired by folk songs, anthems, and spirituals from the Civil War, the performance appropriately coincides with the 150th anniversary of America’s bloodiest conflict.

“Those songs came from a time when the American psyche was divided between North and South,” says Sellars. “Now we are divided again, but it’s between Red States and Blue States.” 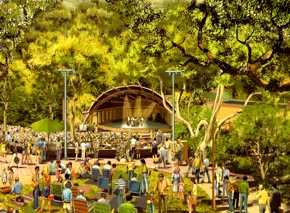 The staging of Winds of Destiny, Sellars remarks, will present Upshaw as a combat veteran trying to recover physically and mentally from the trauma of war.

“The toll on America right now is very high,” says the director, “not just on the people who are in uniform, but on the communities they come from. We also have a new structure, the presence of women in combat, which provokes deeper questions about military culture. These are things that are affirmed in these songs [“The Battle Hymn of the Republic,” “When Johnny Comes Marching Home Again,” and “Shenandoah”]. What’s so exciting for me is working with Dawn as a way to explore all that.”

According to Morris, “The way Peter is staging this, Dawn is having nightmares as she relives the experience of the battlefield and coming home. The music of George Crumb moves through these familiar songs on many levels. There are shimmering layers of percussion. There are explosions of sound that tear through the mind like shrapnel, producing a sheer sense of physical woundedness.”

At Sellars’ suggestion, the performance of Winds of Destiny will be followed by a concert of traditional Afghan folk music performed by some master musicians from that country who now reside in California.

As this year’s music director, Upshaw will be featured in a variety of concert roles. In addition to her performance in Winds of Destiny, she will sing the world premiere of Winter Morning Walks, a song cycle by Maria Schneider. She will also preside over a recital showcasing graduates from her vocal artist program at New York’s Bard College Conservatory.

Presenting a contrast between new and old has also been a long-held tradition at the Ojai Music Festival. So, in addition to cutting-edge premieres by Crumb and Schneider, the festival will include performances of Bach’s Violin Concerto in A Minor, with Richard Tognetti as soloist; Schoenberg’s Transfigured Night, performed by the Australian Chamber Orchestra; and Beethoven’s “Kreutzer” Sonata as part of a Saturday morning alfresco recital by Tognetti and pianist Gilbert Kalish.

Anyone, as Peter Sellars says, who has made “the pilgrimage” to the Ojai Music Festival will tell you that it is a truly unique experience. How could it not be? After all, it is Shangri-La.