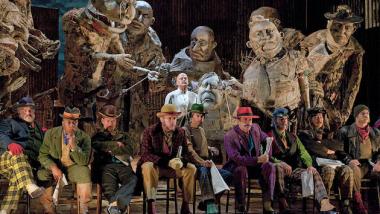 In his autobiography, Music by Philip Glass, the composer recounts a conversation he had in 1976 with Hans de Roo, the director of Netherlands Opera. Roo had just seen Einstein on the Beach performed at the Carré Theater in Amsterdam.

“Well Philip,” Glass recalls Roo saying, “That was fascinating. Now, how would you like to write a real opera?”

“I remember answering that I’d like that very much,” Glass recounts. “But what did he mean by a ‘real’ opera?”

The debate over what constitutes a “real” opera and Glass’s choice of a subject fills quite a few pages. But the project Glass ultimately proposed to Roo was a fully orchestrated, three-act opera based on M. K. Gandhi’s formative years as a barrister and activist in South Africa between 1893 and 1914.

The title Glass chose for the opera was Satyagraha, a Sanskrit word meaning “truth force.” It was also the name Gandhi chose for the nonviolent political resistance movement he founded to fight the discriminatory laws and practices imposed by the British government on the Indian population of South Africa. It became Glass’s most produced opera.

On Oct. 20, Los Angeles Opera will present director Phelim McDermott’s highly acclaimed English National Opera production of Satyagraha, making L.A. Opera one of the only opera companies in America to present Einstein on the Beach, Akhnaten, and now, Satyagraha.

Back in 2007, the English National Opera took a chance. The company invited Phelim McDermott and his creative partner/designer, Julian Crouch, the two men that had founded London’s Improbable Theatre to conceive their first opera, Satyagraha.

Improbable Theatre, which was founded in 1996, gained international recognition when the company produced a grand guignol piece of musical theater based on a devilish German children’s book character, Shockheaded Peter. The production incorporated a bold sense of visual design and puppetry, not dissimilar to the type of theater Julie Taymor was creating in America.

“When you see Satyagraha, it looks like we had a plan,” said McDermott fresh off the plane from London and about to begin rehearsals. “We didn’t have a plan at all. But we did have self confidence about our way of working and our visual vocabulary.”

The production’s initial workshops took place in a grotty London warehouse where McDermott and Crouch began to “muck about” and invent a visualization that could illustrate the historical and mythological settings of the opera.

As conceived by Glass and librettist Constance DeJong, Satyagraha is based on the historical events that shaped Gandhi’s early years: his first experience of racial prejudice in South Africa; the decision to use the law as a means to obtain social equality; the formation of the Tolstoy Farm collective; and the creation of the Satyagraha philosophy of nonviolent protest. But at the same time, the opera (whose libretto is drawn directly from the Bhagavad-Gita and is sung in the original Sanskrit) was designed to function on an abstract, mythic level, including the characters of Krishna and Arjuna.

“Satyagraha was our very first opera and we dared ourselves to do it,” McDermott recalled.

Julian and I both thought there was space written into the libretto and the narrative that would allow us to invent our kind of theater. We made some big decisions about the visual vocabulary that involved experimenting with simple materials like newspaper to illustrate the creation of Gandhi’s publication, Indian Opinion. The idea was to take something simple and build it into something that becomes powerful. It’s not called "Gandhi, the Opera." It’s called Satyagraha. It’s not a biography. It’s about an idea, a concept about political action and self-realization around which real events happen.

The production, which was an overwhelming success, was reprised by ENO in 2009 and again in 2013. The American premiere took place at the Metropolitan Opera in 2008. From the beginning the production’s success surprised McDermott.

“I only thought it would be done once or twice,” he conceded as we chatted in one of L.A. Opera’s rehearsal rooms. “This will be the seventh time we’ve staged it. When we first did it, people thought it couldn’t be done. It was too difficult. We just dared ourselves and the results were fantastic, like breaking the four-minute mile. At this point, I know the piece the we designed wilI do the work it needs to do. My job is to work with the cast and make them feel confident.”

In 2016, Los Angeles Opera presented McDermott’s stunning production of Akhnaten. The challenging task of conducting fell to Mathew Aucoin. It was his, and the orchestra’s, first attempt at a Philip Glass opera, and the learning curve was reflected in the musical quality of performances, which was tenuous opening night, but grew consistently in strength during the run of the show.

has the advantage of being conducted by Grant Gershon who has a long background of working with the music of Philip Glass, Steve Reich, and John Adams. That being said, Gershon does not underestimate the challenge the singers and chorus are facing, having to sing Glass’s complex score (with its multiple repeats) in a language they have had to memorize phonetically.

“You have to have a system in place for keeping everyone on track,” Gershon said. “So my primary responsibility is making sure the cast and chorus know where they are in the score all the time. That will involve a lot of hand signals. The chorus plays a large part in the opera. They’re in almost every scene. You can’t imagine the level of concentration this is going to require. The scale of Satyagraha is epic.”

Gershon said he’s also been studying the metaphysics of the opera.

As part of my preparation I’ve been immersing myself in the Bhagavad-Gita, which I think is essential to understand and appreciate what Philip Glass and Constance DeJong were trying to achieve. The idea of the spiritual and the political aligned together as a movement for social justice is central. There has never been a time when that message wasn’t relevant, but it seems particularly relevant right now. Gandhi said we must refuse to engage with our enemies the way they would engage with us. It’s also about being willing to put your life on the line.

The man tasked with the challenge of singing the role of Gandhi is tenor Sean Panikkar, a Merola graduate and former Adler Fellow. His path to the role, however, has been decidedly bumpy, beginning with a hatred of Glass’s music.

“My first exposure to Philip Glass was in college when we had to study Einstein on the Beach,” Panikkar recalled making a face like he’d just eaten bad fish. “I hated it! It was driving me crazy just listening to it.”

Then as often happens in the world of opera, Panikkar’s career took an unexpected turn. He was asked to step in at the last minute for an ailing Richard Croft at the honors ceremony for the National Endowment for the Arts.

I remember Christina Sheppelmann asked me to sing the final aria from Satyagraha.

Mezzo-soprano J’Nai Bridges, who made a stunning impression when she sang the role of Nefertiti in L.A. Opera’s production of Akhnaten, will sing the role of Gandhi’s wife, Kasturbai. Satyagraha, she says, is the greater challenge.

“Philip Glass’s music looks so simple on the page,” she observed between rehearsals. “It’s not simple. It’s insanely complicated. The repetitions are the problem, especially because there will be one or two notes or words that are different. And you’re having to sing in Sanskrit! Akhnaten was hard, but this is harder and the scenes are double the length. You can really get lost.”

Bridges does have the advantage of having worked with McDermott before.

“When we were doing Akhnaten he told us not to worry about acting or thinking about the meaning of the words,” she said. “He wanted us to embody the feeling of the scenes. He said our presence was about stillness. That’s not the kind of opera I was used to.”

Whether it’s a “real” opera or not, McDermott said Glass told him, “If I knew then what I know now about opera, I’d never have written Satyagraha.”