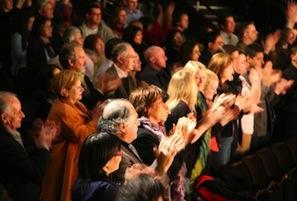 Recordings to Save Classical Music? Cheers to That

Deep questions on the future of the classical music industry dominated “Reactions to the Record III,” a symposium on early recordings, musical style, and the future of performance, held at the Stanford Music Department last weekend. 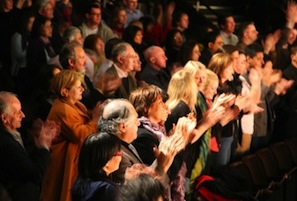 Anatole Leikin, pianist, professor at UC Santa Cruz, and SFCV contributor, addressed the problem most directly. The classical music industry, he says, suffers from aging audiences and high costs, causing some orchestras to fold and recording contracts to be cancelled. While musicians have no control over the large-scale economic and cultural causes of decline, they do have the ability to affect some things, such as etiquette, programming, and performing habits in concerts.

Leikin has a few suggestions to make classical concerts less stultifying and boring — for so he finds them to be — and all his ideas involve returning to customs of the 19th and early 20th centuries.

Why not allow, even encourage, applause between movements of large works, and even during the music after a virtuoso turn? A concert is a communal experience between performers and audience, and suppressing applause deprives the musicians of vital and encouraging feedback. The idea that it would break their concentration or the precious mood of the work, Leikin says, is pretentious nonsense.

His second suggestion is to change programming styles. Two continuous hours of one type of music is more than the ear should take. Why not return concerts to the variety-show format of the 19th century that offered something for everybody? In those days, various types of compositions were mixed together in programs, and a song with piano accompaniment could come between two movements of a symphony.

Most of all, he decries what he calls the “great freeze” in performing styles. Almost every performer sounds alike. They all reproduce the literal notes of the score, and make a fetish of eliminating the performer as a creative element in the music. In the 19th century, by contrast, vividly distinct personalities like Franz Liszt and Anton Rubinstein dominated the keyboard. Do we have anybody like that today? “Perhaps we do,” says Leikin, “but nobody can know it,” because displays of personality are discouraged.

Other speakers at the symposium agreed with Leikin about modern performing styles. Daniel Leech-Wilkinson of the University of London was being deliberately provocative when he described strict adherence to the score as setting up the composer to be a “fascistic dictator.” He was probably being even cheekier in claiming that interchangeable artistry is merely an economic conspiracy to save money on rehearsals, on the grounds that, if everybody performs the same way, they don’t have to spend as much time working it out.

Whether because of the limitations of musical notation, or from unspoken expectations of what performers will do, composers leave many of their expectations unwritten.

Behind his rhetoric, Leech-Wilkinson had a serious philosophical point. A score is not music. Only a performance is music. A score is merely written instructions for creating that music, and those instructions are necessarily incomplete. Whether because of the limitations of musical notation, or from unspoken expectations of what performers will do, composers leave many of their expectations unwritten.

Wait a minute, though ... Are all modern performances really alike? As a concert and recordings reviewer, I earn my keep distinguishing one performer from another, noting how one evokes a specific mood or displays a particular skill, while others do something else. Were this not possible, I could only write about the works, not about the specific performances.

Yet all these distinctions are actually minute, even hermeneutic, in nature. Certainly, it took me years of listening before I felt confident in making them. A century ago, musicians were far more diverse in their approaches, and old recordings prove this.

Another symposium participant, José Antonio Bowen of Southern Methodist University, demonstrated this by statistical force with his collection of hundreds of recordings of the virtuoso soprano aria “Una voce poco fa” from Rossini’s opera Barber of Seville. This aria is traditionally sung with ornamentations far beyond what’s printed in the score, though manuscripts do exist with suggested elaborations by the composer. In recordings from the early 20th century, Bowen has found that each singer has her own individuality, and that resemblances between them come in national schools: Spanish singers use similar ornamentations to each other, and so do Germans.

A century ago, musicians were far more diverse in their approaches, and old recordings prove this.

This variety quickly decreased by the 1920s, Bowen says, and disappeared entirely after Maria Callas recorded her version in 1957. After that, everybody copied her. There’s a lesson in this history: Recordings change the performing environment. Once anyone can hear the best performers, and once those performers are conscious that they’re making recordings for the ages — not just live performances to be heard tonight and preserved only in memories — those recordings become the standard that influences all. This has happened also in jazz, Bowen says, even though that’s a field that prizes individuality and spontaneity more than classical music does.

Can we use early recordings, before that “fascistic dictatorship” set in, to free ourselves from that straitjacket and inspire good, revisionist modern performances? Well, we can try. Reactions depend, though, on your taste. Anatole Leikin performs the ultra-Romantic Scriabin in a manner inspired by the composer/pianist’s own piano rolls (he’s even written a book about it, The Performing Style of Alexander Scriabin [Ashgate Publishing, London]), and he’s certainly sold me on it. When Scriabin is performed in a literal score-reading it sounds dull and senseless. With the composer’s own broken chords and fluctuating rhythms, it comes alive with emotion and warmth. Leech-Wilkinson sent us to a website run by pianists who are similarly inspired by Grieg’s early recordings of his own piano music.

Some of the symposium presenters had a good suggestion: Focus on universities. Young performers have fewer habits to untrain.

What about early recordings with Willem Mengelberg conducting the orchestra of the Amsterdam Concertgebouw? Other conference presenters played us some of those. Portamento — an unnotated sliding between notes, a once-common technique completely unused today — gives just the right touch of yearning to the angular turns in the lyric melodies of Mahler’s Fourth Symphony. In Schubert’s “Unfinished” Symphony, Mengelberg directs so many brief variations in tempo as to make a modern listener feel slightly seasick, though his returns to the main tempo are always perfectly judged and deeply satisfying to hear.

Yet there are problems with following these suggestions, even Leikin’s for variety-show programming and freer applause. Variety shows aren’t popular on television anymore — in the days of fast-forward TV recordings, people no longer are willing to sit through what they don’t like to wait for what they do. The freedom to applaud between movements could easily become mandatory and perfunctory, the way that shuffling the feet and tapping bows on the stand — once musicians’ personal way of honoring spectacular work by colleagues — has become de rigueur in many orchestras.

If, as Leech-Wilkinson asserts, too-literal fidelity to the score sets up the composer as a “fascistic dictator,” could not adherence to his own recording — the very sound of his playing — become a more intolerable master than the score? Not that anyone now playing composer-inspired versions of Grieg or Scriabin has gone anywhere near that far, though it’s strong language to use about score-dedicated performers too.

We have Mengelberg’s score of Mahler’s Fourth marked up with comments and instructions that the conductor received from Mahler himself. Symposium participant Sharon Choa, a conductor, tended to speak of these as if they’re unquestionable and mandatory. Yet how accurately are they transmitted, and how mandatory did Mahler intend them to be? And where does this leave Bruno Walter, a conductor who worked even more closely with Mahler and carried his imprimatur, yet whose recordings are quite different from Mengelberg’s? Perhaps Mahler approved both of them, and left the choice up to us.

Then, too, even if musicians want to adopt older playing styles, it’s hard for trained professionals to “untrain” themselves and do so, particularly if they’re also playing other gigs where keeping the job depends on using a modern style. Some of the symposium presenters had a good suggestion: Focus on universities. Young performers have fewer habits to untrain, and many of them — unlike those at conservatories — are playing for love, without intent to become professionals, while majoring in something besides music. They might be willing to give different performance practices a try.

At a symposium concert, the Russian Chamber Orchestra flipped “period-style” Baroque performance on its head by playing Handel concertos and Bach’s “Brandenburg” Concerto No. 5 in the period-style of the early 20th century. This meant big, heavy, and slow. After Kumaran Arul, a Stanford piano professor and a convener of the conference, played the keyboard cadenza in the first movement of the Brandenburg — on a full-sized modern Steinway and at about a quarter of the speed that today’s harpsichordists tend to adopt — the final cadence came thundering down with a weighty inevitability unlike anything I’d heard in Baroque music before. The inter-movement applause after that one was spontaneous, hearty, and deserved.