Return of the Composer-Performer: A Rough Guide to New Music by Virtuoso Musicians

Among the contributions that younger musicians and composers have made to the new-music world — or, really, the musical world in general — has been the revival of the composer-performer as a central figure in the scene’s ecology.

This was the natural order of things in days of yore: Think of composers like John Dowland, Domenico Scarlatti, Dietrich Buxtehude, the Bach family, and so on through Mozart, Beethoven, Schumann, Brahms and even Stravinsky. Particularly at the early end of that spectrum, these musicians were often more renowned as players than as composers. It wasn’t until the dawn of the Romantic era that the balance began to tip in the other direction, and even then, composers were frequently performers.

The era of “you compose, we play” specialization actually has been quite brief. The wall separating composers and performers began to crumble with the rise of the Minimalists, who at first performed their own music as a matter of financial necessity, since grants were not forthcoming, lucrative commissions were few, and performance fees were generally higher than royalty payments.

The case is a bit different for the youngest generation of composer-performers, and although their reasons and approach to performing vary, they are closer, in many ways, to the Mozart-Beethoven model.

A composer like Joshua Green, whose has just issued his debut recording, Telepathy and Bop (self-released), has been sufficiently successful as a composer for television and film that when he performs, as a saxophonist and leader of his genre-crossing Cyborg Orchestra, his principal focus is his own work. Mari Kimura, a virtuoso violinist and electronic music composer, mostly performs her music, although on her new Voyage Apollonian (Innova), she intersperses her compositions with Brazilian pop classics.

The case with ACME (American Contemporary Music Ensemble) and ICE (Intenational Contemporary Ensemble) is different. Both are new-music bands that have built their reputations exploring adventurous repertory by composers of all stripes, but they also have composers among their players. Three of the four composers represented on ACME’s new Thrive on Routine (Sono Luminus) — Caleb Burhans, Caroline Shaw, and Timo Andres, are also on the ensemble’s roster. And ICE’s On The Nature Of Thingness (Starkland) is devoted to music by two of its members, the toy piano virtuoso Phyllis Chen and the percussionist Nathan Davis. 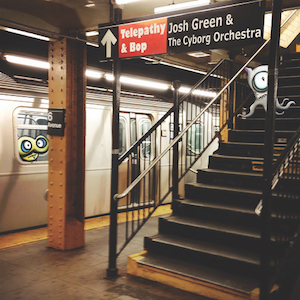 Josh Green, like many young composers, grew up listening to, performing, and studying music of all sorts, and is disinclined to wall off his musical passions. I see some similarities to Fred Ho, another composer-saxophonist whose works draw on the timbres and moves of jazz, but also has elements of new-music harmony and rhythmic invention, and who has turned up at Tanglewood and in other classical precincts.

Telepathy and Bop bristles with energy from start to finish, and you can hear it as a jazz album if you insist, although if you prefer that narrow focus, there are still questions to resolve about which of jazz’s many currents it sails in, and why so many other influences — rock as well as classical — have crept into his work.

The album’s opening piece, for example, Boy and Dog in a Johnnypump, is an explosion of Zappa-esque fusion, with prominent electric guitar figures, distinct jazz textures and harmonies, and the changeable, meter-shifting rhythms that jazz and contemporary classical music share. The three-movement title piece, begins as an anarchic, free-form ramble and slips into a bebop tribute before an almost Impressionistic interlude leads to a rhythmically vital cat-and-mouse section and, finally, another burst of Zappa’s influence in a section built on speech-like rhythms. And Improvisations and Nebula, which Green describes as a György Ligeti tribute, also tips its hat to Satie and Liszt.

Several pieces allude to art and artists in other media. Boy and Dog in a Johnnypump was inspired by the visual artist Michel Basquiat, and La Victoire is an alternately gauzy and textured evocation of Magritte. Soir Bleu: A Rag of Sorts is Green’s musical impression of Edward Hopper’s similarly-titled painting of a Parisian restaurant, in which a clown is seen smoking at one of the tables. Like most of these pieces, it is unpredictable, moving as it does from a salon-like accordion meditation, to circus-like figuration, to a frenetic waltz. (It is also a tribute to the 78rpm record era, beginning and ending with a sound that listeners of a certain age will recognize as the scratching of a stylus on shellac.) 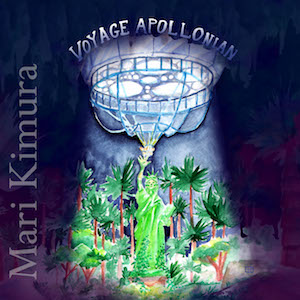 I have followed Mari Kimura’s work for a couple of decades, and although she has collaborated with some pop world avant-gardists — she plays on a wild, 1994 improvisatory album, Acoustics (Les Disques Victo), with the guitarists Henry Kaiser and Jim O’Rourke and the saxophonist John Oswald — I hadn’t really thought of her as someone likely to record Brazilian jazz classics like Egberto Gismonti’s Frevo or Hermeto Pascoal’s Bebê. Both are included in Kimura’s own, thoroughly personalized arrangements on Voyage Apollonian, along with Joaõ Bosco’s rhythmically vital Coisa Feita. It turns out that Kimura has a collection of pieces like this, which she may eventually release.

The album’s main business, though, is Kimura’s own music. Kimura is an eloquent violinist whose tonal palette ranges from the traditional warm, lush hues that would serve her well if she played the standard repertory more to the edgier sounds of extended techniques, at least one of which — the use of subharmonics --- extends the instrument’s range downward, below its natural range. One work here, the unaccompanied Jan Marciana, uses a subharmonic fifth, which she tells us in her program note is new to her arsenal.

The most evocative of her offerings are those for violin and interactive computer, which she uses here as an orchestra so flexible that it seems unbound by the laws of physics and the timbral limitations of conventional instruments. In the title piece, an electronic string orchestra shimmers, slides in unison into a reverb-heavy distance, and morphs into tactile percussion. Here, and in Eigenspace, a sometimes introspective, sometimes angry meditation on the Fukushima nuclear disaster, old world tonal elegance is combined with modern textural sensibilities, techniques, and effects.

Kimura’s talent for looking to both the past and the future is best represented by Canon Élastique, which uses the Baroque technique in an unusual way. Composed at IRCAM, the piece was created with a ring recorder, a device that records a performance, but allows Kimura to alter and manipulate it with the violin line she plays as the earlier performance is played back. Breuer Vivant also glances backward, embracing an antique form — the passacaglia — as well as the sultry, winding lines of Romanticism, and the rich double-stopping that Fritz Kreisler used so plentifully. Yet the piece also uses electronics to recast these receding styles in thoroughly current terms. 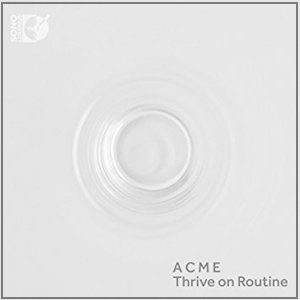 Like the works on Green’s album inspired by painters, Breuer Vivant has its roots in another art form, in this case architecture: The piece was composed and recorded in a house by Marcel Breuer that was also filled with furniture that Breuer designed. And indeed, taking inspiration from works of the past seems to be going around: Caroline Shaw and Timo Andres do it as well, on ACME’s Thrive on Routine, although the works they are reconsidering come from the musical canon.

Shaw’s hypnotic In manus tuas for solo cello (played with passion and beauty by Clarice Jensen, the ensemble’s artistic director, who is also the cellist on Green’s album) was inspired by, and briefly alludes to, a Thomas Tallis motet, and her Gustave Le Grey for piano (played by Andres) deconstructs, reconfigures, and expands upon Chopin’s Mazurka in A minor (Op. 17, No. 4).

Charles Ives’s daily schedule, rather than a specific work, was the inspiration for Andres’s Thrive on Routine, a lively and imaginative four movement string quartet that moves easily and naturally between musical accents — a rustic brusqueness, a mysterious harmonic haziness, a slightly acidic Romanticism — most of which can be traced back to Ives, although the piece does not sound particularly Ivesian.

The Shaw and Andres pieces make up the center of the album. They are bookmarked by Caleb Burhans’s Jahrzeit (the title refers to a Judaic annual commemoration of someone who has died, usually a relative, in this case the composer’s father) and John Luther Adams’s In a Treeless Place, Only Snow. These are very different works. The Burhans, for strings, is a slow, wistful meditation in a melodically and texturally rich post-Minimalist style. The Adams uses pitched percussion and celesta to evoke an icy, sparkling winterscape. What they share is a use of repetition to gradually build involving, increasingly intense harmonic textures. 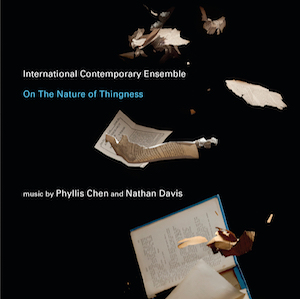 If you are building a playlist of new contemporary music releases, you could do worse than to follow the ACME album with ICE’s The Nature Of Thingness. That collection’s opening work, Nathan Davis’s Ghostlight, for prepared piano, has some of the delicacy and atmospheric otherworldliness of the Adams, a quality it shares with Hush the whimsical toy piano work by Phyllis Chen that immediately follows it.

These are both remarkably inventive, witty composers whose works are fresh and varied, and sometimes leave you puzzling over how the sounds are made. Chen’s Chimers, for example, sounds like an electronic piece at times, but the liner notes say otherwise: What you hear, interwoven among the clarinet and toy piano lines, are rods played with tuning forks, string glissandos that hint at the sound of a theremin. Not that Chen is averse to using electronics. They are an important part of Beneath a Trace of Vapor, for flute, and in Mobius, the sounds of customized music boxes are processed to make them sound even more outlandish.

Davis, by contrast, seems more focused on acoustic sounds and extended techniques, which he explores in On Speaking a Hundred Names, an extraordinary bassoon soliloquy performed vividly by Rebekah Heller, and even more colorfully in the album’s title work, a four-movement vocal setting that draws texts from disparate sources — Study of the Object, a poem in Polish poem by Zbigniew Herbert; Hugo Ball’s Dada, with excerpts from the 1916 Dada Manifesto (accompanied by jaw harp); Arthur Rimbaud’s Voyelles, with a vocal line based on a single, repeated note, and Italo Calvino’s Daybreak — all scored for ensembles of constantly shifting timbres, and sung by Tony Arnold with a moving fluidity, and sometimes a subtle sense of humor, as the text demands.