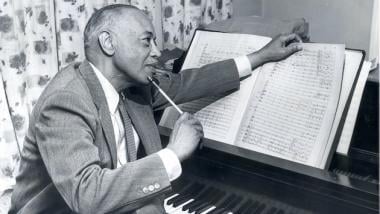 I’ve spent most of my adult life in libraries, and more specifically, somewhere among the Dewey Decimal 780s. I’ve always been amazed at the skills of senior librarians who knew their collection so well that they seemed to advise just about anybody on any topic. As a music student and then a young music librarian, I had come to know the music collections where I studied and worked, and for many years, I assumed music libraries collected the same materials. That is, until I was hired at the Center for Black Music Research (CBMR) in Chicago.

Instead of books on Mozart and Mahler, I saw books on Joseph Bologne — “Le Chevalier de Saint-Georges” — and Samuel Coleridge-Taylor. In the place where I thought I’d find Latin chants, I saw Ethiopian chants written with the Ge’ez alphabet. For the first time in my adult library life, I was lost. I felt as though I had entered a foreign musical territory, and in a way, I certainly had. But, how had I managed to earn three degrees in music and know absolutely nothing about any of the composers who filled the shelves at the CBMR? Why had I spent years trying to learn German, French, and Italian, when the works at the CBMR were in Yoruba, Ewe, and Zulu?

Thirteen years later, I still empathize with people who want to learn about music of the African Diaspora but don’t even know where to start. In most cases, their formal training has been exclusively canonical — namely, they know the standard European composers, genres, and repertoire, but they need a road map through the surprisingly rich collection of Africana musics.   Other times, they want to connect with their roots but require the linguistic or informational assistance to begin their journey.

Last year, the CBMR received an inquiry from Eun Lee, who was requesting assistance in programming orchestral works by composers of color. Lee is the executive director of The Dream Unfinished, a 21st-century activist orchestra based in New York City. Founded in 2015, TDU uses classical music as a platform to engage audiences in a larger dialogue on issues of racial and social justice.

Initially, I met with Lee over the phone, and when I asked her who she had in mind for her upcoming concert, I was met with an uneasy laugh. I knew what that laugh meant. It’s the same nervous chuckle I used to utter when I felt musically inept all those years ago. Lee, a clarinetist-turned-orchestra administrator, shared the same kind of canonical music education and experiences that I had, and consequently, was in desperate need of a path through the world of black music research.

I invited her to visit the CBMR in person and, together, we investigated a range of compositions by using the archival materials, sound recordings, scores, composer biographies, and historical accounts held in the collection. Ultimately, we made a list of possible pieces that spanned four centuries and whose composers hailed from four different continents.

This weekend, The Dream Unfinished (TDU) will present a concert of works that exemplifies the stylistic variety people tend to associate with canonical music. Yet, true to her intention, Lee programmed pieces by six composers from diverse locales within the African Diaspora: Joseph Bologne “Le Chevalier de Saint-Georges” (born in Guadeloupe, raised in France: 1745–1799), Samuel Coleridge-Taylor (England: 1875–1912), William Grant Still (United States: 1895–1978), Margaret Bonds (United States: 1913–1972), George Walker (United States:1922–), and Evan Williams (United States: 1988–).  With this robust roster of Afro-descendent composers, TDU will accomplish what none of the 80-plus largest orchestras in the United States has been able to do in the last three years.

To put this concert into context, TDU’s repertoire choices should be considered against those listed in the results of the Baltimore Symphony Orchestra’s repertoire survey “By the Numbers.” The survey revealed that during the 2016–2017 season, approximately 1.9 percent of the composers programmed by the League of American Orchestra’s (LAO) 85 largest members were written by musicians of African descent — that is, less than 10 of the 519 programmed composers.  During the previous season (2015–2016), 89 LAO members programmed a total of five Afro-descendent composers — combined, for .99 percent of the 504 total composers scheduled that year.

When the BSO launched the “By The Numbers” series of surveys in 2014, it was not explicitly intended to expose any issues of racial disparity.  For example, the survey spreadsheets contain column titles such as “Composer Nationality,” “Living/Dead,” and “Gender” but no columns for ethnonyms or racial designations. Rather, the survey was originally designed to address a growing need for data that would ultimately “provide context for ongoing conversations in classical music or highlight trends — such as how often music by female composers is performed — that might not have otherwise been noticed.”

Each year, the results of these surveys are posted in a searchable spreadsheet on the BSO’s website: In 2014, the survey reported the programming intentions of 21 major orchestras, and, as indicated earlier, the number of respondents for the 2015 and 2016 surveys quadrupled. In order “to help [the orchestra] tell stories of interest to its supporters,” the BSO hired Ricky O’Bannon in 2014, who, as a journalist, has interpreted the extensive data on each season’s most performed composers, most performed living composers, and most represented composer nationalities. His annual synopsis is accompanied by a vivid infographic (co-created with Rachel Upton), which immediately calls attention to one of the concerns that prompted the surveys in the first place — namely that 98-plus percent of all the pieces performed in the past three years had been written by a male composer.

With this data, the “By the Numbers” series substantiates claims of gender disparity in musical programming and, as an informational resource, may facilitate the future programming decisions for major and regional orchestras. In addition, the spreadsheets will serve as indispensable resources for curriculum designers, musicologists and theorists, educators, conductors, graduate students, and enthusiasts who intend to pair their own work and musical understanding with that being practiced on the stage.

But “By the Numbers” does much more: it takes the pulse of practitioners at the helm of the classical musical world to see where their programming allegiances lie, and the answer is clear: European and Europe-derived music written by men. Even without explicitly mentioning race, the series also corroborates the powerful statement made by Center for Black Music Research (CBMR) founder, Samuel A. Floyd Jr., in the introduction to The Transformation of Black Music: The Rhythms, the Songs, and the Ships of the African Diaspora  (Oxford University Press, 2017): “I regard classical/ art music by black composers as the last frontier of black music scholarship because these composers and their music continue to be ignored and upstaged by the classical music mainstream.”

In The Transformation of Black Music, Floyd explores the contributions of Afro-descendent composers on four continents (Africa, Europe, North America, and South America) over the course of 450 years (ca. 1550 to the present), but he also pays considerable attention to contemporaneous performing ensembles and their ability to keep musical traditions alive.  He turns to the work of James Monroe Trotter, whose groundbreaking, 1878 publication Music and Some Highly Musical People documents some of the earliest all-black and interracial ensembles in the United States.

Trotter notes that prior to the Civil War, New Orleans had “an association of colored men called the ‘Philharmonic Society.’ Several liberal-minded native and foreign gentlemen of the other race were always glad to come and play with the ‘Philharmonics’ overtures and other music of a classical character. This was really a scholarly body of musicians, with whom the very best artists of any race might well be proud to associate.”

Not all of Trotter’s references were to professional ensembles, however. In a more general reference to musicmaking in the South, Trotter writes “notwithstanding their lack of a scientific knowledge of music, colored men, as instrumentalists, have long furnished most of the best music that has been produced in nearly all the Southern States. At the watering-places, orchestras composed of colored musicians were always to be found, in fact, at such places their services were considered indispensable.”

Music and Some Highly Musical People is a treasure trove of information and has been referenced in nearly every historical survey of black music in the United States written in the last 140 years.  Unfortunately, the majority of the 800+ composers, performers, ensembles, and pieces listed therein have been all but ignored outside of the confines of black music historiography.  And, black musicians of the nineteenth century are not the only ones whose fate is precarious.  As Floyd laments in his introduction to Black Music in the Harlem Renaissance (Greenwood Press, 1990), “we know little about the quantity and the quality of the bulk of the works produced by Renaissance composers; we know even less about the conditions, number, and quality of their performances.”

Between the Harlem Renaissance and the Civil Rights Movement, only a handful of organizations put black music on their programs. Two Harlem-based interracial orchestras, the Cosmopolitan Symphony Orchestra (founded 1947), and Symphony of the New World (founded 1965), promoted and performed works by black composers, but not exclusively. The former included European literature on its programs and the latter championed the works of female composers.

Nevertheless, Floyd notes that, over the past 50 years “large strides have been made toward correcting the omission of black music from the historical record.” And, as The Dream Unfinished presents its concert of six Afro-descendent composers, attendees will be welcomed — possibly for the first time — to learn about black music.

The second part of this essay will examine these “large strides” — ranging from diversity initiatives in orchestral hiring practices to shifts in university-level music curricula — which have permanently affected the integration of black classical music into mainstream musical discourse.

Trained as a music librarian and historian, Melanie Zeck joined the Center for Black Music Research in 2005 and has provided intensive informational support for researchers worldwide.  She has also been consulted by American and European conductors, instrumentalists, and vocalists in the discovery and programming of pieces by composers of African descent for public concerts and recitals.

Composer and scholar Carman Moore talks with SFCV about Scott Joplin and his overarching influence on all aspects of American music.

There’s a lost world of music SFCV would like to help you discover, and we're going to make that happen in a series of articles.