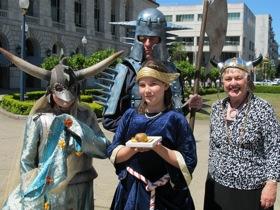 It was an event like no other. Answering San Francisco Opera’s clarion call, on June 13, seven human contestants — two linked by blood — and one irresistible canine of similar Amesian pedigree straggled into the courtyard north of the War Memorial Opera House starting at 11 a.m. or so for SFO’s Wagner Ring Cycle Costume Contest.

Although the scene evoked countless Halloween nights on Castro Street, where straight gawkers hunger for a glimpse of their first drag queen, enough contestants eventually appeared to make for a respectable showing.

This critic, still under the spell of the spectacular celluloid sunset that closes SFO’s new joint production of La fanciulla del West, arrived dressed as a Fanciulla holdover. When SFO’s Julia Inouye insisted that I compete, I instantly transformed into Fanclinde, Wotan’s most illegitimate daughter. Fanclinde, I explained, had never made it to Valhalla; given the manner in which she was conceived, she had yet to figure out which way was up. Which is undoubtedly for the best. Had the likes of Fanclinde ever showed up on Wagner’s doorstep, Valhalla would have gone up in smoke long before Das Rheingold came into existence.

Jon Finck, head of SFO’s press department, explained why he had conceived the contest. “I wanted to put the spotlight on SFO’s Ring while having a more lighthearted and whimsical moment. Die Walküre is probably the most emblematic of operas, and the ‘Ride of the Valkyries’ is probably the way most people know opera. This contest gives the public an opportunity to interpret the opera in their own fanciful way.”

The judges were equally enthusiastic. Kristina Flanagan, cochair of the indispensible SFO Ring Circle Patron Program, revealed what she really thinks about the Ring when she declared, “The costume should distinctly evoke Wagner’s sense of humor.” David Gockley, SFO’s general director, intended no double entendre when he observed, “I’ve heard San Franciscans will take every opportunity to come out and dress up.”

Terri Stuart, vice president of programs for the Northern California Wagner Society, proclaimed that at the top of her list of judging criteria were “wit, whimsy, sarcasm, and truth to all that is Wagner.” And Christopher Verdosci, SFO costume shop manager, promised to give high marks for technical execution, originality, and a connection to actual Ring characters.

A connection to actual Ring characters? So much for Fanclinde.

Equipped with a microphone, Finck introduced each contestant. First up was the dark horse, as it were, Robert Allgeyer. Dressed in a nondescript black trench coat, he removed it before the judges to reveal the one true ecofeminist, Siegfried.

Sporting black fishnet stockings and an ecofriendly reusable shopping bag, our modern-day hero pledged to take all his orders from Brünnhilde.

For such politically correct deference, Allgeyer won the Grand Prize, one $500 pair of orchestra premium tickets to SFO’s current, universally lauded production of Die Walküre plus a $100 gift certificate to Absinthe Brasserie and Bar.

At that point, Fanclinde, who had almost impaled herself on Brünnhilde's spear after catching a glimpse of her golden self on the door of the opera house, thought that several strong shots of Absinthe were a good substitute for the Holy Grail.

Second Prize went to the gorgeously attired Opera Tattler (Charlise Tiee), costumed as Erda, “with a lot of plants from my friends.” The Opera Tattler had just returned from Los Angeles, where she saw her fifth complete Ring. As she confided before the contest, “This is how Erda would have been dressed had Muche designed a Ring.”

Third Prize went to Agnès Ames (Brünnhilde) and her father, Lawrence Ames (Fasolt). Agnès’ mother, Karen Ames, former head of SFO’s press department, was quick to explain that her daughter was the Brünnhilde in Siegfried, which is why she had the ring in her possession. That was later revised to Die Götterdämmerung. As the critic who transformed the Shepherd in Tannhäuser into a shepherdess, I can relate. 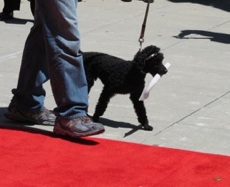 Trailing at the winning team’s side was a miniature poodle, Puck (Wotan), whose astounding feat of carrying Wotan’s sword in his teeth earned him the Pet Prize of several highly coveted, velvet-lined plastic garbage bags. Also rewarded was family friend Allegra Franklin (Freia), whose attempts to bribe the judges with chocolate gold coins that melted in their pockets even before they reached
their mouths netted her an Honorable Mention and a hefty dry cleaning bill.

Cynthia Fusco, who strode about as a most impressive Valkyrie, also received Honorable Mention. As for Fanclinde, she remained inexplicably unacknowledged as prizes were awarded. Although she did eventually receive a new, handsome SFO sweatshirt, which she shall wear with pride, the near-unbearable onus of her Honorable Unmention impelled her to quickly flee Sin City, and drive back to Oakland’s placid barrio faster than Brünnhilde (or Debby Voigt) could ever mount a horse.