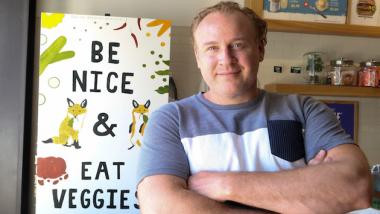 Lucas Meachem’s cholesterol reading came back too high. His doctor, unperplexed, told him it wasn’t a problem, he could take a pill for the rest of his life to bring it down. But, at age 40, the Grammy Award-winning baritone mused there must be another way. A cholesterol reading also redirected first tenor and tenured San Francisco Opera chorister, Andrew Truett. Both men responded to their test results by changing their diets. Meachem went vegan. Truett scrapped a strict keto regimen. According to The Washington Post, in 2018, 45 million people in the U.S. either went on a diet or switched to a specific diet to address health concerns. That’s up 22 percent from the previous year. If you are what you eat, does what you eat inform how you perform?

Recently in San Francisco to perform Mercutio in San Francisco Opera’s production of Romeo and Juliet, Lucas Meachem doesn’t do anything halfway. When Meachem fell in love with the pianist who would later become his wife, Irina, he described their love as all-encompassing. They ate their way through appetizers to desserts, and he gained weight. That same love prompted him to make that fateful doctor’s visit and later adopt the plant-based vegan dietary regimen she’d practiced before he had pulled her to “the dark side.”

This wasn’t Meachem’s first tangle with dietary change. In college at Yale, he tinkered with the Atkins diet, with which he says he lost weight, but never felt good about it. After five months of vegan eating (plant-based, no meat or animal by-products), he lost 50 pounds. His cholesterol went down — so much so, it was too low, prompting him to add in more healthy fats like avocado, oils, and nuts. He says he now wakes up energetic and the lost weight is no longer weighing down his joints. Three and a half years later, veganism still agrees with him.

“I feel healthier now than I did when I was in my 30s, and I’m lighter than I was too. As I get older, things aren’t as easy as they were in my 20s and 30s. I had to begin to eliminate things that kept me from singing at my maximum abilities,” said Meachem. “Me as a vegan right now makes me the best singer I can be.”

In 2017, a group of six friends decided to go keto. Andrew Truett joined them, inspired by the fun of doing it together. They compared notes and shared resources. Keto, short for ketosis, restricts the daily intake of carbs to under 30 grams. Of the six friends, only three are still keto today. Truett had dabbled with other specific diets before landing on low-carb. For eight years he was dairy-free because of how it affected his singing. Then, he didn’t eat any mammals for seven years because of their impact on the environment. But all of that gave way when he began eating keto, as it was hard sticking to the regimen without dairy, beef, or pork. For a year, he stuck to straight keto, but now eats low-carb, in the range of 50 to 60 carbs daily from adding in more vegetables.

“Keto gets the fat off you, but it’s still pretty unresearched as to the long-term effects of it .… I don’t want to kill myself eating fat all the time,” said Truett.

Rather than a one-size-fits-all approach to diet for vocalists, Meachem advocates trying foods and drinks, listening to how your body and voice respond to them: “This career is tough. If something you eat or drink affects you and makes you feel bad, you have to cut it out.” Vegan chicken salad gave him extra phlegm, so it became a no-go. Truett said over time, what he can and can’t eat has changed. His dairy allergy is more of a crapshoot. “Sometimes I can eat dairy and sing just fine. Other times not. If I’m going to be singing, I just don’t eat dairy.”

But, transitioning to a new way of eating can come with challenges. In his early vegan days, Meachem said the food was either “disgusting or great.” What could have been a passing fad of a diet transformed for him into an ethical reason after watching documentaries, Forks Over Knives, Cowspiracy, and Earthlings. Seeing how animals were slaughtered and their environmental impact deepened his dietary resolve. “I wish it wouldn’t have been a health scare to go into veganism.”

What draws Truett to restricted diets is the structure they provide and dietary guard rails: “That level of simplicity that came with setting boundaries for myself is comforting to me.” It’s also why adding in intermittent fasting with low-carb has been a boon for him. Known as “16/8 eating,” it involves 16 hours of fasting and eating all his meals within an eight-hour window. The two dietary restrictions work in tandem since Truett said “carbs make us ferociously hungry” and he no longer gets hunger spells eating low-carb. 16/8 eating has been key to eliminating acid reflux with which Truett’s had on/off issues, a condition both Truett and Meachem said can plague singers. Depending on what time Truett ate his last meal the previous day determines when his eight-hour eating window takes place today. This can mean he’s preparing food for his two children while packing three to-go meals for himself to eat later on.

“It’s a practice in patience and not being perfectionist. I get to do it when I can do it. Perfectionism is what makes people stop dieting,” said Truett. “The acceptance that it’s not going to be perfect and it’s going to be a bumpy road and just keep trying are keys to a successful eating plan.”

Transitioning to a new dietary regimen can be met by support and skepticism alike. Truett described how the way he ate made others around him uncomfortable. “I have had people say they felt judged by the way I ate — because I was so strict, not because of what I said.” Meachem said in the beginning, he felt a little bit ostracized at work. As his way of eating changed, so did some relationships because “we can’t share meals like we used to.” Other times, he described friends defending meat-eating without him prompting discussion. “I refuse to talk about it at the dinner table because while we’re eating is not the time to have this discussion because it ends poorly. I’ve had to learn this through trial and error … lots of error.” While he doesn’t bring up his veganism at work unless asked, he expressed wanting to be more versed in talking about vegan eating without guilt attached. It’s something he’s researched to broaden dialogue from dietary choice to environmental implications of eating meat. Meachem said, “You start everything with ‘we’ because at the end of the day, we are all in this together.”

Both Meachem and Truett have dietary tricks for navigating busy rehearsal schedules and production cycles. Truett doesn’t eat or drink dairy when soloing. He also cites the early meal breaks at SF Opera as helpful for sticking with 16/8 eating. He tanks up on two to three liters of water and aims to finish eating and drinking for the day by 6:30 p.m. He also acknowledges that regimen might not work for everyone: “As a soloist, Meachem does not have the luxury. They (soloists) are cranking hard all night long. Their voices need to be fully lubricated and do what they need to do to power through the performances.”

Part of Meachem’s “powering through” begins with a pre-performance ritual of eating an Impossible Burger around mid-afternoon, saying “Your body is an engine, why not put better fuel in it?” During intermission he eats either food delivery like lemongrass deluxe or pad thai with an avocado shake from Tenderloin vegan eatery Golden Era, or he’ll pack a sandwich. But, intermission eating always includes soft fruit, like bananas. Meachem said the mushy fruit relaxes the larynx down and helps reset everything, getting him back into shape if there’s any tension that’s crept in during the first and second acts, helping him start again, fresh.

What started out as a dietary shift for health reasons for Meachem and Truett has shifted. Meachem is using his voice to speak up in advocacy, participating in festivals like California Vegetarian Food Festival and Symposium in August, where he was a speaker. There, Meachem talked about how as vegans, it’s not a huge leap to activism, especially, as he says, when looking at the science and research on the correlation between animal agriculture and carbon dioxide. He advocates for getting back to thinking about the animals and word choice, how cows become steak, further distancing eaters from remembering they are eating animals. Truett’s gone back to not eating pork and limiting his beef, not just for health reasons, but for environmental ones too. Both vocalists are hopeful for the future. “Veganism was all about me, me, me when it began. It’s become about them, them, them,” said Meachem.