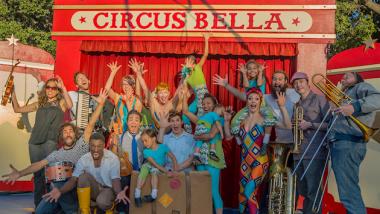 These Musicians Aren’t Clowning Around

Ah, the circus. The thrills, the chills, the laughs, the tunes! Wait, what? Yes, the tunes.

I never thought much about circus music until I moved to the Bay Area and started meeting musicians who described their stints in circus productions as formative experiences. With two circuses in town featuring original music performed live by impressive bands it’s seems like a good time to pay a little attention to this creatively fecund but overlooked musical setting.

Even in its early years as a shoestring operation, Circus Bella always performed with live accompaniment. Trapeze artist Abigail Munn, who co-founded Bella 10 years ago with David Hunt, had to push back against the naysayers who felt she was wasting precious resources in hiring a house band.

“They’d say, ‘You’re crazy! It’s so expensive,’” she says. “But it’s so much more fun as a performer. It means you’re going to have to trust somebody and it’s going to be different every night. Our band is so good we have a joking mantra before every show: Be brave, be funny, be safe, be better than the band.”

Judging from an opening weekend performance of Circus Bella’s “Kaleidoscope,” which runs on Treasure Island through January 6, Munn’s pride in the Circus Bella All Stars is well-earned. Led by accordionist Rob Reich, who also performs with the Gypsy jazz-inspired combo Gaucho, the group brims with top Bay Area improvisers. Reich documented the All Stars back in 2011 with an eponymous album, and he’s planning on recording the “Kaleidoscope” score shortly after the show closes.

For Bella’s first decade the circus mostly performed al fresco in parks. With “Kaleidoscope” the company has moved under the big top and expanded its offerings, and Reich responded by expanding the band’s sound. The show opens with a playful, knockabout overture that touches on the multitude of musical currents that animates Reich’s tunes, particularly early jazz and swing, tango and waltzes, cartoon and film scores.

“The band has changed a little through the years,” says Reich, a graduate of Oberlin Conservatory whose composing gained a good deal of attention via the Bay ensemble Tin Hat. “We had trombone before, but once we added the tuba I didn’t think we needed another trombone so this past year I got Kasey Knudsen involved. There are some pieces that are really written out and some stuff where there’s freedom and improvisation. Everyone’s really down for exploring all those different situations.”

With the band situated on a platform above and behind the stage the musicians have some of the best seats in the tent. The connection between the musicians and circus performers is palpable as the band responds to each act as it unfolds, heightening the drama, humor, and mood.

In a particularly sweet interlude, clown Sara Moore warbled “It’s Only A Paper Moon,” with Reich’s lush orchestration. Through every act, Pinkham’s deft and pinpoint trap work punctuated the action. “Abigail gives me all the freedom in the world to write what I want,” Reich says. “It feels like anything goes musically. The tunes are over such a wide range of styles. I get to bring all kinds of stuff.”

If Reich’s Circus Bella All Stars represent a jazzy take on the traditional circus music sound, Cirque du Soleil’s score for “Volta” epitomizes the cinematic approach of new circus. Running through Feb. 3 under the big top at AT&T Park (and at the Santa Clara County Fairgrounds Feb. 13–March 24), the production features an original score by French-born, Los Angeles-based vocalist, songwriter, multi-instrumentalist, and record producer Anthony Gonzalez (aka M83). Led by Australian drummer Benjamin Todd, the “Volta” band originated the production, a development process that unfolded over the course of four months in Montreal.

“I see the music in a Cirque show as important as acrobatics and stage design and costumes and lighting,” Todd says. “Everything comes together to create this amazing spectacle. The music itself is extremely cinematic, following the emotion that’s happening on stage. Very similar to a movie, there are melodic themes for different character and groups.”

While “Volta” features a nominal narrative, the acts stand on their own. The musicians are on stage, but mostly obscured behind scrims, so that many audience members might not be aware that there’s a live band, though Finnish violinist/vocalist Camilla Bäckman is a major character in the production. In one particularly breathtaking sequence, a parkour crew glide in and out of a three-story structure powered by a trampoline, choreography that attains a quality of time-stopping weightlessness more beautiful than any Hollywood special effect.

Gonzalez initially supplied three 16-bar pieces for the act, and the band worked with him on extending them to cover the full six-to-eight minutes “because the music needs to have some shape to it,” Todd says. “It’s a very driving, heavy, synth-pop energetic piece. Of all of the music in the show that’s the one that fits the action on the stage the best. It’s one of the pieces where I’m really following the action on stage. As they’re falling down, I’m doing some fills on the drums and cymbal rolls during the big tricks. It’s really up to the guitar to be main solo instrument, while the drums keep it driving along.”

Like with the Circus Bella All Stars, the band’s ability to interact with the performers as the action unfolds is a key to the production. As different as “Kaleidoscope” and “Volta” are, the drums play a similar role, a role dating back to the 19th century and the invention of the trap set. Loops and vamps allow the Cirque band to expand segments as needed to build suspense or cover a transition.

“One of the things that keeps the show so interesting and exciting to play is that we don’t really know what’s going to happen in some acts,” Todd says. “Particularly the clown act and the hoop-diving act. Sometimes they miss a trick intentionally to rev the crowd up and we have to react to that. Even though circus has progressed so much, my role as the drummer is punctuating most of the visual aspects.”

In an era when musicians are always under threat of being replaced by canned music and DJs, circus is one forum that continues to tap into the power of live accompaniment.

Steven Schick Builds a Theater of Sound with his Fabulous Machine

In the guise of a wildly imaginative inventor, Schick works magic with his musical contraptions.