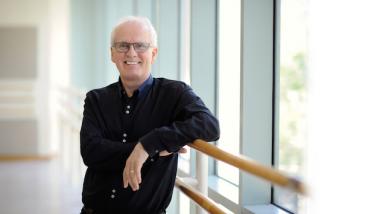 San Francisco Ballet Artistic Director Helgi Tomasson is 76 as this season begins, and says he has no plans to retire. Even raising the question brings the troupe’s public relations team hustling defensively into play. Tomasson the choreographer is still producing new works and Tomasson the artistic director is still seeking other contributions to the repertory in addition to molding an internationally renowned company, whose gifts were self-evident in the first week of the repertory season, full of examples of where the company has been and tantalizing clues to where it’s going.

Tomasson was born in Iceland October 8, 1942. He was raised by his mother, his parents having divorced when he was “very young,” he said. He’d started dancing in Reykjavik at the age of 9, and his interest developed gradually through his childhood. “I participated in school performances; that was fun.” As a teen, he was given the opportunity to go to Denmark and dance in the summer performances at Copenhagen’s world-renowned Tivoli Gardens. They were half-hour pantomimes, based in the Italian commedia dell’ arte tradition. “I did lots of parts, and I also did Harlequin,” the central figure, in the brightly colored diamond-patterned leotard and the black mask. He liked that role the best. “It was the biggest part.”

Tomasson, as should be clear by now, had talent from early on. But since he wasn’t a Danish citizen, he couldn’t join the Royal Danish Ballet, established in 1771, one of the world’s finest companies, whose school has launched dozens of careers at home and abroad (the “Danish invasion” of George Balanchine’s New York City Ballet in the 1960s being a prime example). Then as luck would have it, choreographer Jerome Robbins spotted him dancing in Iceland in 1959 and asked him to join his company, Ballets USA. Robbins also arranged a scholarship for the 17-year-old to the School of American Ballet in New York. Moving fast (one of his many gifts), Tomasson danced with the Joffrey Ballet (where he met his wife, Marlene) and then with the Harkness Ballet. In the 1969 First International Moscow Ballet Competition, he won the Silver Medal to Mikhail Baryshnikov’s gold. In 1970, Tomasson joined the New York City Ballet.

It was Balanchine who persuaded Tomasson to try making dances. His first for the City Ballet was the 1983 Ballet d’Isoline. Since then Tomasson has choreographed more than 40 ballets for his own company, including The Fifth Season, which can be seen Feb. 14–24.

But while he’s proven himself a successful choreographer, it’s as artistic director that he’s flourished. He knows what he wants and he knows where to find it. And dancers come looking for him and for the San Francisco Ballet School. Nearly 80 percent of the company’s dancers have studied there, which helps cast a wide net. His company is “the most diverse in what they come from,” he reckons. What does he look for in a new recruit? He knows it when he sees it. “I have such good experience in this that a dancer doesn’t have to be professionally polished for me to recognize the talent.” Nor is there an S.F. Ballet look. “What’s interesting is that people are not all the same. I go by what I like, what I see in a dancer and what’s a good fit for the company. The women are 5 foot 1 to 5 foot 7, or 8.”

In 1985, Tomasson, 42, retired from the City Ballet. He became the San Francisco Ballet’s artistic director, replacing the controversial Michael Smuin. Grappling at first with being the new guy, Tomasson managed to be a peacemaker and gradually a force to be reckoned with, steering the company through financially uncertain times like the financially taxing renovation of the War Memorial Opera House that left the troupe wandering from venue to venue, homeless for a year.

That was then. Today, secure in its position as one of the top companies in America, San Francisco Ballet welcomes new technology, such as the video projections and electronic music that were part of the excitement of last year’s Unbound festival, with its 12 world premieres. “We have to move with the times. We can’t stay back and become a museum,” he said. Similarly, the company has embraced work that includes same-sex partnering and more egalitarian treatment of women as, for example, the lifters rather than only the lifted. Incidentally, in terms of #Me too, “if you’re talking about sexual harassment, it’s absolutely a ‘no’ here,” said Tomasson. And we take steps to include that all through the organization.”

Unlike more unconventional groups, his company is unlikely to move past tradition on the order of, say, re-gendering classical ballets – casting male dancers as Giselle or as Odette/Odile. “I don’t think that’s this company, no,” he said. Nor is Tomasson interested in presenting choreographers who have no knowledge of the classical idiom. Even though the company repertory has a generous helping of ballets in soft shoes, “the pointe shoe is very much associated with classical ballet training,” and remains prevalent.

The new season, which has only a few premieres as the company regroups from being “Unbound” last year, has what looks like a wonderful bumper crop of rising dancers. Does Tomasson have his eye on anyone in particular for — oh, the future? A long pause. “I always have my eye on people,’’ Tomasson said, “but it would not be fair, choosing one over the other. Like [saying] which are my favorite children.”

The production, choreographed by the artistic director in 2009, returns to the War Memorial Opera House after a six-year absence.

The artistic director of San Francisco Ballet is as vital and creative, at 71, as ever. He distills lessons from his career as he talks about his new ballet.