What Should I Wear With This Album?

As composers from the Western-classical tradition increasingly question the role of their music in society — who it reaches, who it serves, who they want to reach, who they want to serve — a recorded album is just the medium to challenge musicians to consider the diversity of what music can do for people. Five recent new-music releases illustrate this range for me. 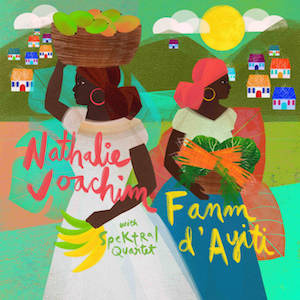 Composer and flutist Nathalie Joachim has delivered my favorite album of the summer with her Fanm d’Ayiti (Women of Haiti), released by New Amsterdam Records on Aug. 30. Within my first listen I knew I would be going back, for full vacations and just for short visits to sunny tracks like the tripartite “Suite Pou Dantan.” That’s what you would expect from any good album, to inspire consumption of both its whole and parts, but albums in contemporary new music rarely function for people the same way albums of other popular genres do.

Joachim has done something here that is slowly becoming more common in the field — writing work specifically geared to be a recorded album. Largely, classical music albums have been treated as a kind of receptacle for more-or-less programmed sets of music intended for live performance. Classical albums like this are not without merit, but not exactly useful in day-to-day living, or day-to-day entertainment. Outside of the world of classical practitioners, concert music albums are for special situations, study, meditation even.

It’s fair to say that most composers working today have heard mostly recorded music in their lifetime, and probably engaged with a lot of that music in album form (though that is clearly changing for the up-and-comers). Many have realized that they want to merge the music they make with the way they’ve heard it most, resulting in this new, often wobbly path for composers coming from a Western classical education.

On the surface, you would think that composers would be good at album-craft, considering that most pedagogy in composition is about how to create longer and longer forms. But albums are not just “long forms.” As a unit of recorded time this is true, but culturally, albums have functions outside of just being a duration of music. Albums, for those who still listen to albums, are useful objects in life — for long trips in the car, for mourning, for dancing, or to rekindle some feeling, to match a mood. This is just one of the remarkable things about Fanm d’Ayiti — It has use in my emotional life, as well as my musical and intellectual life.

In the album, Joachim processes, covers, and pays respects to important Haitian women of her life: her grandmother, the girls in her hometown church choir, legendary singers Toto Bissainthe, Emerante de Pradines, and Carole Demesmin. It is clearly a work of joy, love, and devotion. Her willingness to dive into herself by way of honoring those who brought her up, who came before her, is unique in the New Music world. She is working within a realm that is torn between adoration of its past and the effort to move to the next step. Joachim does not seem interested in that struggle, spending her focus on what is real to her and her world.

Each song brims with significance, but without undue weight, and Joachim’s singing is mixed just in the right spot throughout. There is fresh air in the instrumentation of these tracks — Spektral Quartet and Joachim on flute, with electronics. The small number of instruments makes each arrangement intimate, and yet with fewer people, the space between their voices is open. It is a very intense experience to listen to the whole album, especially once you are knee deep in “Madan Bellegarde.” It has an elegant arc, though, that makes the brightness in the final, titular track cathartic in a way that is not too large to carry.

There’s this idea in old-style compositional teaching that claims that you need to give up complexity in either text or music to write a good song. This elitist thinking extends to how people view writing for a non-concert medium. But a good album is not about allowing zone-out time, or about giving the listener time off, though some artists certainly do. Look at Björk’s Vulnicura (2016): she does not let the emotional tension drop at all, from nose to tail. That album is a thick, tear-and-blood soup. Do I listen to Vulnicura all the time? No. I save it for occasions when I want to plumb the depths of heartbreak. Do I listen to the track “Quicksand” on repeat when I want to feel like a Feminist warrior in a slow-mo sequence? Yes.

wildUP | The Pieces That Fall to Earth 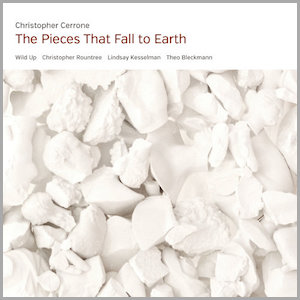 Another thick soup is wildUp’s new album of Christopher Cerrone’s work, The Pieces That Fall to Earth (also released by New Amsterdam). For those that want an album for an epic drive or solo sunset-viewing, this would be a great candidate. Though it is made up of three multi-movement pieces, all written separately for live performance, the experience of listening to all three together works surprisingly well. Here the promise of good curation is fulfilled.

If each piece on this album were a weapon, I would characterize the first work, The Pieces That Fall to Earth, as a sword — operatic, fantastical, wonderfully diverse; dazzlingly sharp as sung by Lindsay Kesselman. The Naomi Songs, sung by the mellifluous Jodie Landau, would be a kitchen knife, an object of the home, but no less sharp. The final piece, The Branch Will Not Break, is a bomb. It’s radius of impact is much wider. Thankfully, Cerrone times the climaxes in all three works impeccably. On paper, The Branch Will Not Break looks like too much sauce: the choir, the personal and national existential dread, and yet the waves all but knock you over. It’s magical the way he is able to sustain the feeling of high stakes for so long. 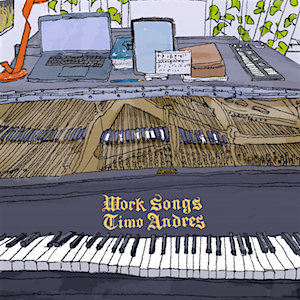 The conversion from concert work to album track does not always go so swimmingly. In March, the ubiquitous New Amsterdam Records released a five-song album by Timo Andres — Work Songs. This album is unfortunately stuck in the “song cycle.” Unlike in Fanm d’Ayiti, the instrumentation — piano, accordion, guitar, and multiple vocalists — as it remains song-to-song does not seem tethered to the content, but more a convenience of performance.

The texts, drawn from many 20th-century authors writing about their artistic working life, are worthy of setting, but dense. In Andres’s treatment, words stick out like stray hairs. Perhaps it is part of the meaning of the work — the endless doubt and boredom that can seep into creative life — but his songwriting takes so many turns harmonically and texturally that it sounds like he is stepping on his own feet. The songs are gristly, with all this connective tissue he must think needs to be there, but he doesn’t notice when it gets in the way of the flavor.

While Andres’s intention was to engage with these accounts of artists’ working habits, he didn’t see that, in America, “work song” has a connotation suggesting songs of slave labor and chain-gang songs. I wish someone he worked with on this project had pointed that out, it could have easily been “Songs of Work” or even “Working Songs.” Careless. 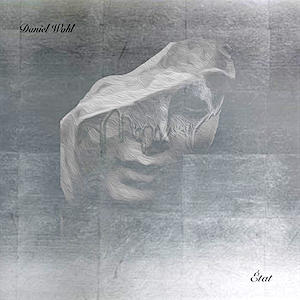 Continuity works in different ways, both aiding and detracting, for each of these albums. Constructing works with complex through-lines and development is a strength of composers brought up with Western classical education. Whether it is thematic, tonal, instrumental, behavioral, or textural — continuity does not work as a multi-tool, or a cure-all.

Daniel Wohl’s third album, État, illustrates the way that unity in voice across an album can both enhance the immersive, full-length experience of a work, but limit it to that mode of consumption. I would take this album on a bus ride in an entirely new place, especially if it were raining. Released in May by Nonesuch Records (in partnership with New Amsterdam, surprise!), État shows off Wohl’s considerable chops as a producer of electronic tracks. He speaks EDM (electronic dance music) with his own voice, with fluidity. You do not feel a raised boundary of genre in this music, as often happens when creators start to blend their genre interests.

The titles of the tracks could very easily be rearranged and still make sense. Not that titles matter that much, but it reflects the homogeneity of the ecosystem of this album. The vibe is, in general, mourning for lost knowledge and the irreverence of time, indulging in the beauty of mourning. In his album notes, Wohl describes the word “state” as one both “ancient and futuristic,” and only when I listen do I understand what he means. Too big of a commitment for a short drive.

Emotionally this album feels a bit like a feedback loop. It is hard, I think, to execute a wordless album that doesn’t feel a little blurry. However, the final track breaks away from the gorgeous-glum quicksand. “Subray” is easily my favorite in the lineup; it mutates many of the feelings of the rest of the album into something much, much fresher.

Recordings of new music rooted in tradition that still is uncompromisingly contemporary — and sometimes unsettling.

Discovering the Music of Alvin Lucier Is Partly About Discovering Yourself

Ambient-Music Harpist Mary Lattimore Crafts a Soundtrack for the Future