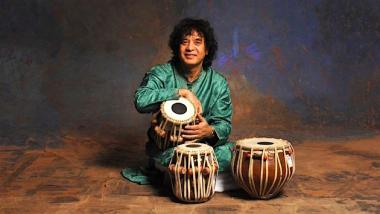 American music’s love affair with the music of India is legendary.

The memory of visits from jazz visionary John Coltrane was close to the heart of Indian sitar virtuoso Ravi Shakar, when I interviewed him at his American home in Encinitas, California, in 1996. Three decades prior, Shankar had asked the saxophonist, “John, you seem to be such a peaceful man, why do I hear so much in your music of crying out, and disturbance?” Coltrane had responded, “What I want to get into is what you have, in your music.”

What Shankar had summarized for me as “this feeling of tranquility and peace” had already prompted Western classical violinist Yehudi Menuhin, in the 1950s, to host both Shankar and his then brother-in-law, sarod player Ali Akbar Khan, as representatives of North India’s own classical music, dating back at least as far as the 15th century. Both of these Indian masters set up California homes, with Khan also establishing the Ali Akbar College of Music, in San Rafael. Jazz and Western classical performers and many of their fans maintained their fascination with the sounds of India throughout the second half of the 20th century, and after the Beatles’ George Harrison studied sitar with Shankar in the mid-1960s, the Indian influence was also heard in rock ’n’ roll.

But Zakir Hussain, brought up in Bombay (Mumbai) and now a resident of San Anselmo, points out that little has been mirrored of the reverse phenomenon, the influence of Western jazz and popular music on music-making in India. Hussain is a celebrated, much-recorded master of the Indian tabla drums, who succeeded his father, Alla Rakha, in Shankar’s ensemble, and later joined the faculty of the Ali Akbar College. He and his wife, Toni Minnecola, administer their record label, Moment Records, with offices in San Anselmo, where SFCV spoke with Hussain about his new ensemble, Crosscurrents, whose name telegraphs its intention of showcasing the West-to-East musical import trade. The ensemble, which includes five Indian instrumentalists (including Hussain) and two American jazz collaborators, will perform over four days at the SFJAZZ Miner Auditorium, later this month.

To demonstrate cultural crossover, Hussain vocalizes a song, “Laal laal gaal”, from the score of the film Mr. X, produced during the “golden age” of Hindi language filmmaking, known by the portmanteau “Bollywood.” Hussain snaps his fingers as he sings. “It’s blues,” he points out, and he continues with another film song, “Eena meena deeka”, from the same year, 1957. “That’s also blues,” says Hussain, “and all this became part of Indian popular music.” Both songs will be performed during the SFJAZZ concerts, along with original music and improvisations by members of the ensemble.

The presence of the instruments of jazz preceded the development of the form in India, as it had in the U.S., Hussain notes, brought in by those who colonized the subcontinent. “The Brits, the Portuguese, these were the people who ruled Bombay and Goa and those places, and they had instruments like saxophones, trombones, and trumpets, as well as violins” and other strings. Baba Allauddin Khan, Ali Akbar’s father, had mastered many of these instruments and encouraged his North Indian classical pupils, including his son and the young Ravi Shankar, to broaden their musicality. Both Shankar and Ali Akbar Khan, Hussain notes, “earned their bread-and-butter playing in Indian films and composing for those films, thereby working with a hybrid orchestra of Indian and Western instruments.”

Hussain started participating in Bollywood scoring sessions as a preteen, playing tambourine or bongos. He first heard what he liked in jazz on a recording by black multi-instrumentalist Yusef Lateef, who’d adopted the Islamic faith and a new name in 1949. (Hussain was himself raised a Muslim.) But wider public acceptance of jazz in India lagged behind developments in the West, where both Ravi Shankar and Ali Akbar Khan had performed and recorded with American jazz artists.

“It took about 20 or 25 years of hard work to convince [Indian] people that there was enough of an audience for that kind of music,” says Hussain, “because jazz, like Indian classical music, is an acquired taste. When the Shakti ensemble, [which included] me and [English guitarist] John McLaughlin, first went to India in 1984, that was one of the starting points, because it was supposedly jazz, but it also had an Indian face.” Shakti had been formed a decade earlier as a then-novel fusion of Indian and jazz music, and included several Indian instrumentalists besides Hussain, well-known in their homeland. “Then I and L. Shankar [Shakti’s violinist] started playing with Louiz Banks and Sanjay Divecha,” who are now the Indian pianist and guitarist in the Crosscurrents ensemble. “These are the unsung heroes who preserved a particular creative process of music in India which did not originate there.

“Next thing you know,” Hussain continues, “a school was established in Mumbai to study jazz, at the semi-professional level, and jazz spawned a generation who were an interesting mix. I’d had to come to this part of the world as a totally Indian musician, and start from scratch, learning how to find my way through other forms of music. But today’s Indian musicians have grown up parallel, learning all this stuff at the same time! We have one of the hottest bass players, Mohini Dey, who is 21, and people like Quincy Jones are after her to come and play. Niladri Kumar, a young sitarist who plays Indian classical music, turns around and has a band called Sitar Funk. And Rakesh Chaurasia, who was a great Indian flautist, is equally at home with a [Western] flute concerto.”

Hussain, Banks, and Divecha will be joined in Crosscurrents by Banks’s son Gino on drums and Indian violinist Ganesh Rajagopalan. “I’ve wanted to pay homage to those who gathered the banner of jazz in India,” says Hussain, “to give them their deserving applause, and put them on the same stage with great jazz masters of this country,” represented in Crosscurrents by bassist Dave Holland and saxophonist Chris Potter. “Dave used to room with John McLaughlin, and we’ve been talking about working together,” Hussain points out. “As masters inviting Indian masters over, it would be good to have someone who could hold the floor on which others could traverse, and there are few who can do that like Dave can. Someone like Gino Banks would really learn a hell of a lot by having to make sure his ride cymbal is in time with Dave’s laying down of the walk.”

Chris Potter has won multiple awards as a tenor saxophonist, but plays several other reeds, flute, and piano. He’s performed in other aggregations with Holland. For Potter and Holland, who’ll be joining Hussain on a trio tour of Europe next year, the Crosscurrents engagement “dusted off for them a lot of tunes that came as inspiration from having heard Shakti and other [like-minded] musicians. They’d never played these in public before, because they were tunes that did not fit in a jazz quartet, and required a certain set of minds that could deal with those combinations of notes and chords and patterns.” The Crosscurrents collaboration may result in an album, which would be released on Moment Records.

For their SFJAZZ engagement, “Dave and I will probably do a tune by ourselves,” says Hussain. “We’ll have mainly new [improvised] music, but also tunes that Louiz has written, Sanjay has written, Shankar has written, and Dave and Chris and I have written.” This variety may help illustrate the comparisons and contrasts between the component musics, among which are that “Indian music presents to the audience one chord, where the melody player and rhythm player take turns improvising, rather than just one solo that the jazz drummer gets at the end of the song. Also, the jazz drummer has the freedom to choose to play in 4/4, 6/8, with sixteenth notes or thirty-second notes, where the tabla player must stay within the prescribed rhythm itself. But the two [forms] can work together.”

Hussain, who was named an SFJAZZ artist-in-residence last year and was given a lifetime achievement award by the organization this year, is grateful to SFJAZZ for “a chance to do things that I would otherwise be struggling to put together, like working with Joshua Redman, Herbie Hancock, Bela Fleck, and Edgar Meyer, and coming in touch with Dave Holland. During my residency, SFJAZZ allowed me to put my Masters of Percussion [ensemble] in that world, and to bring over Indian musicians and have them work with [jazz, Latin, and pop artists] Eric Harland, Giovanni Hidalgo, and Steve Smith. Now Eric and Steve are working with Indian musicians on a regular basis, and I hoped that what’s been established continues for years and years to come.”

Our interview came to an end in time for Hussain to go work on a commissioned piece for the Kronos Quartet. “They wanted a piece that unveils for them, for lack of a better analogy, five easy pieces of Indian tabla, our modes of improvising,” says Hussain, with a chuckle. “But I assure you, it will be a classical piece.”

Zakir Hussain: Tabla Prince to Whom the World Listens

The much-recorded, much-loved tabla artist prepares for his Zellerbach Hall concert and discusses matters ranging from his childhood influences to his latest ensemble colleagues.