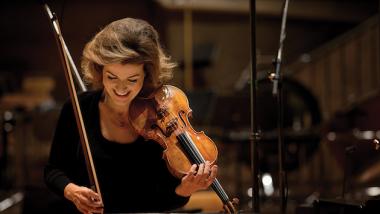 The violinist’s characteristic wide range of repertory and advocacy for new music were factors in being named one of three awardees of the 2019 Polar Music Prize, each worth a cash award of one million Swedish kronor ($108,030).

Mutter, hip-hop pioneer Grandmaster Flash, and the music charity Playing for Change will be presented with the Polar Music Prize by King Carl XVI Gustaf of Sweden on June 11.

Grandmaster Flash, born Joseph Saddler, is credited with advancing the art of “scratching” — manipulating sound by placing his fingers on vinyl albums, perfecting beat looping, and discovering many of the iconic beats still sampled today by contemporary rap artists.

The Playing for Change Foundation was founded in the U.S. in 2007 by Whitney Kroenke and Mark Johnson, with a mission “to inspire, connect and bring peace to the world through music.” The foundation has created music programs in 10 countries, enabling young people to attend free classes in dance, musical instruments, languages and musical theory.

Mutter is a four-time Grammy winner, who has performed the music of traditional as well as modern composers, and has premiered 26 new works over the last 40 years. She is also known for supporting younger generations of musicians through her charitable institutions, which back young violin, viola, cello and contrabass soloists worldwide.

Against her adventurous programming, the Davies Hall recital seems mostly traditional, with sonatas by Mozart, Debussy, Ravel, and Poulenc.

Billboard reports that, told of the award, Mutter recalled how “a few years ago I played an entire cycle of 10 Beethoven sonatas in one day in Stockholm. By accident, I had dinner with the King a few days before. I told him I wasn’t sure if anyone would show up for the 10 sonatas. He charmingly said, ‘You will have at least four people — me, my wife, and my children.’ He did attend and stayed through all three concerts.”

Mutter confesses that she did not know about Grandmaster Flash before she was informed of the 2019 laureates, but now “I have been learning about him, watching his videos. He really is the grand master of enhancing music in a very creative way.”

The Polar Music Prize was founded in 1989 by Stig “Stikkan” Anderson, the manager and music publisher of ABBA. A well-known lyricist, he also was the co-writer on many of their early hits. The prize was first presented in 1992. Anderson died in 1997; his family has guided the prize ever since. Anderson’s daughter, Marie Ledin, is managing director.

The prize is traditionally given to one person from the pop world and one from the classical or jazz genre. This is only the second time in the 28-year history of the Prize that recognition is going to three laureates. In 2001, the Prize was awarded to songwriter Burt Bacharach, inventor of the synthesizer Robert Moog, and classical composer Karlheinz Stockhausen.

The violin virtuoso shares her ideas on staying open, engaged, and challenged.

In an emotion-filled tribute, violinist Anne-Sophie Mutter and pianist Lambert Orkis dazzle with their artistry.

A passionate advocate of contemporary music, as well as a master of the classics, violinist Anne-Sophie Mutter talks about composers she venerates.