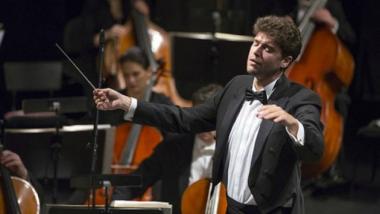 As Berkeley Symphony announced today the third consecutive substitution of a conductor for Music Director Joana Carneiro is four months, the organization also stated the reason for her lengthy absence for the first time: “Carneiro is pregnant and is under doctor's advice not to conduct or travel.”

The daughter of former Portuguese Minister of Education Roberto Carneiro, and a niece of the late Portuguese cabinet member Adelino Amaro da Costa, the conductor lives in Lisbon, normally “commuting” to Berkeley (where she became music director in 2009) and guest engagements, while also acting as principal conductor of the Orquestra Sinfónica Portuguesa in Lisbon.

Today's annnouncement says Carneiro withdrew from the Berkeley Symphony concert on Jan. 26 in Zellerbach Hall, and the conductor will be Christian Reif, of the San Francisco Symphony, while the program remains the same: the Bay Area premiere of Mason Bates’ Cello Concerto with Joshua Roman, to whom the work is dedicated, and Beethoven’s Symphony No. 4. Berkeley Symphony’s December concert was conducted by Elim Chan, and the one in October by Edwin Outwater.

Bates, one of the most-performed composers of his generation, is the first composer-in-residence of the Kennedy Center for the Performing Arts. The San Francisco Symphony’s recording of Works for Orchestra, comprised of Bates’ compositions, was nominated for a Grammy Award for Best Orchestra Performance, and his Anthology of Fantastic Zoology was nominated as Best Contemporary Classical Composition. In July, Santa Fe Opera will premiere his new opera, The (R)evolution of Steve Jobs, in which Bates uses innovative storytelling and an electro-acoustic score.

Cellist Roman, to be featured at the next concert, is also a composer and a TED Senior Fellow; he has premiered his own cello concerto, Awakening. Roman gave the world premiere of the Bates concerto in Seattle, and will perform it with four orchestras, including Berkeley.

Reif is the new SFS Resident Conductor and Wattis Foundation Music Director of SFS Youth Orchestra, coming from Miami, where he was the Conducting Fellow with Michael Tilson Thomas’ New World Symphony for the past two seasons. Reif was also Conducting Fellow at the Tanglewood Music Center in the summers of the last two years, having also worked as assistant with the Los Angeles Philharmonic, the Boston Symphony, and the New York Philharmonic.

Carneiro is also being replaced in San Francisco Symphony's Feb. 16-18 performances of John Adams' The Gospel According to the Other Mary. Grant Gershon, artistic director of the Los Angeles Master Chorale and resident conductor of Los Angeles Opera, will conduct. He had prepared the work's world premiere with the Los Angeles Philharmonic, and also conducted the work at the Ravinia Festival in 2013.