The San Francisco Choral Society opens its 2022 season with Handel’s Dixit Dominus, and the world premiere of To a Lost Year by Taiwanese composer Chiayu Hsu, a work commissioned by the organization.

Selected from close to 100 applicants, Hsu becomes the seventh composer over the last 15 years to write a new choral work for the organization. Born in Banciao, Taiwan, Hsu is an associate professor of composition at University of Wisconsin-Eau Claire. She received her bachelor of music degree from the Curtis Institute of Music, her master’s degree and artist diploma from Yale School of Music, and her Ph.D. from Duke University.

The work, titled To a Lost Year, is inspired by the events of the COVID-19 pandemic, which struck choruses with a variety of challenges. Hsu has written other works about the pandemic, including a chamber-music piece called Bien (Change) A peculiar life of virus.

To a Lost Year’s first movement explores the chaos and unsettled emotions experienced at the beginning of the outbreak, the second movement serves as a dedication to the lives lost due to the pandemic, in particular those who immigrated to the United States. The work concludes looking toward a brighter and more hopeful future.

Chiayu Hsu is known for her combination of Chinese elements and Western techniques that often derive inspiration from poems, myths, and images. Her works have been performed by major orchestras and in music festivals; she is a recipient of the ASCAP Morton Gould Young Composer’s Award.

“We are proud to premiere this exciting new commission,” said Robert Geary. “After the many challenges that the arts have faced over the past few years, I am thankful to bring everyone together once again for more exceptional live performances.”

Along with the larger and older Berkeley Community Chorus & Orchestra, SF Choral Society is a grand demonstration of the power of “amateur music” — performing such large and demanding works as the Brahms, Mozart, Maurice Duruflé, and Verdi Requiems, and Benjamin Britten’s War Requiem, the Bach B Minor Mass, Haydn’s “Lord Nelson” Mass, Handel’s Messiah and Israel in Egypt, Mendelssohn’s Elijah, and many others. 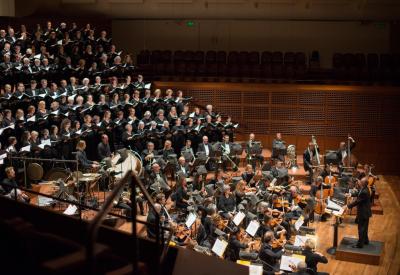 To A Lost Year