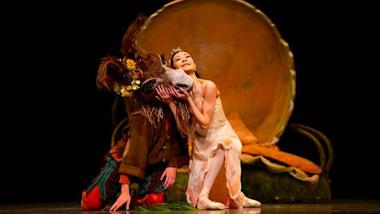 This time of loss and curtailment is also the horn of plenty for free streaming of music and dance.

COVID-19’s devastation of performing arts (and much else) prompted some major organizations around the world to provide digital transmission of shows and concerts — many, if not all, for free.

Closest to home, the San Francisco Ballet, which performed a grand new production of George Balanchine’s A Midsummer Night’s Dream just one time, on March 6, before the War Memorial was closed, took quick action to save the show.

“SF Ballet received permission,” the company announced last week, “to present a limited online stream of SF Ballet in this full-length production, which will be made available via electronic streaming on a limited basis.

“Because this limited stream required an emergency waiver from SF Ballet’s union groups, the streamed performance is available only to ticket holders,” the company announced, promising instructions by email to ticket holders on how to access the stream. The video was made last week, from two special captures rather than using the archival film of the premiere.

SF Ballet also disclosed, in advance of its full 2021 season announcement, that Midsummer Night’s Dream will be included as part of its 2021 repertory season.

All other streaming services listed here are free, including such prominent and otherwise fee-based services such as those of the Metropolitan Opera, Vienna State Opera, and the Berlin Philharmonic’s Digital Concert Hall.

Before that, here’s an important broadcast event tonight, March 17, at 8 p.m. on KDFC.com, 90.3 FM: the San Francisco Symphony’s acclaimed concert last month, Esa-Pekka Salonen conducting, featuring soprano Julia Bullock. After this broadcast, the concert will remain available on the station’s On Demand program.

The Met has launched “Nightly Met Opera Streams,” a free series of encore Live in HD presentations streamed on the company website during the coronavirus closure

All “Nightly Met Opera Streams” will begin at 4:30 p.m. PDT and will remain available via the homepage of metopera.org for 20 hours. The homepage link will open the performance on the Met Opera on Demand streaming service. (You may get “The service is unavailable” message under the new load of demand.)

“We’d like to provide some grand opera solace to opera lovers in these extraordinarily difficult times,” said Met General Manager Peter Gelb. “Every night, we’ll be offering a different complete operatic gem from our collection of HD presentations from the past 14 years.”

The Berlin Philharmonic Orchestra website, starting up in 2008, was among the first large-scale websites to transmit and archive concerts. Over 40 concerts a year are streamed from the Berlin Philharmonie in high-definition video and excellent audio quality. These and hundreds of other concerts are available on the site.

The concert archive of the Digital Concert Hall consists of recent concerts, mostly directed by Simon Rattle, but also older performances such as 1990s concerts with Claudio Abbado. Concerts from other venues, for instance the “Waldbühne” (Berlin’s open-air stage), or a series of “Europakonzerte,” are also included.

The Wiener Staatsoper has also opened up its streaming service to provide audiences with daily opera without charge. Beginning this week, the company is streaming operas from its archives mostly in the same order that audiences would have seen if they attended the theater.

For lists of other free music streaming, see The New Yorker and Sonic Distancing.

LA Phil and Others Cancel Concerts Due to Coronavirus Spread

Organizations and venues throughout L.A. are following guidelines from Gov. Gavin Newsom and canceling or postponing events.

General Director Khori Dastoor knows firsthand the challenges of being an artist, and it has shaped her responses to the coronavirus shutdown.