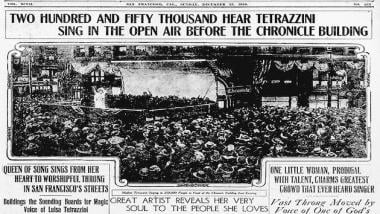 “You ask me to say what I saw and what I did during the terrible days which witnessed the destruction of San Francisco? Well, there have been many accounts of my so-called adventures published in the American papers, and most of them have not been quite correct.

“Some of the papers said that I was terribly frightened, that I went half-crazy with fear, that I dragged my valise out of the hotel into the square and sat upon it and wept; but all this is untrue.”

So Enrico Caruso tried to “correct the record“ of his escape from the city in the ruin of the Great Quake of 1906, the day after his acclaimed Mission Opera House performance in Carmen.

Apparently made of sterner stuff, Luisa Tetrazzini (no chicken, she), sang to an estimated quarter-million San Franciscans four years after the Great Quake (and two years before SF Symphony was born) in the still-damaged city, at Lotta’s Fountain, the historic meeting point after the Quake.

Fast forward through wars, the Great Depression, and other inconveniences — none halting music in the city, even when windows were blacked out in expectation of Japanese air raids — and then in 1989, the 7.3 magnitude Loma Prieta Quake killed 63, injured 3,800, caused $6 billion in property damage, collapsed a freeway, several buildings, and damaged the War Memorial.

World Series or not, baseball had to wait, the Bay Bridge and numerous freeways were down, but 72 hours after the quake, the company schlepped across town and performed Otello in the Masonic Auditorium.

Aida followed the next day, on Oct. 21, and then Idomeneo, which was the scheduled show on the night of the quake. And then, led by General Director Lotfi Mansouri (who spent the quake’s 15 long seconds under his desk in his Opera House office), the company returned to the War Memorial on Oct. 24, performing Otello.

Somehow, the company and audiences persisted in the damaged building, for a time with a net under the ceiling to catch falling debris — and then the two-year, $90 million reconstruction project closed the building — hello, Civic Auditorium and Orpheum Theater! — and reopened triumphantly on Sept. 6, 1997.

Nobody in the audience that night can forget the gala concert celebrating both the occasion and the 75th anniversary of the original War Memorial. Beverly Sills hosted the evening, Sir Derek Jacobi was the master of ceremonies, and featured artists included Plácido Domingo, Marilyn Horne, and Frederica von Stade.

The moment to remember, as reported in The New York Times:

As the audience entered the auditorium, the house lights were dim, complicating the task of finding seats. But the reason soon became clear. When Donald Runnicles, the company’s music director, commenced the evening by conducting the orchestra in the national anthem, the lights suddenly brightened with the line ‘‘And the rockets’ red glare, the bombs bursting in air,’’ revealing, to oohs and aahs from around the house, the stunningly regilded interior with its repainted ceiling of aqua blue, flecked with clouds of white, and the glittering chandelier."

Never will the great building be closed again, I thought, on my way to the SF Ballet matinee of George Balanchine’s A Midsummer Night’s Dream on March 7, 2020 — and found the doors closed. Among the first decisive responses to the coronavirus in the country, Mayor London Breed and the county health officer shut all venues down in the SF War Memorial & Performing Arts Center (SFWMPAC).

Beyond that, according to that order of the County Health Officer, “the City and County of San Francisco prohibits all performances and events with audiences at entertainment venues.”

In the four months since, all these venues — and concert halls, theaters, movie theaters in the state — remained closed. Recently there have been tentative moves to reopening some facilities, but on July 13 Governor Gavin Newsom’s ordered a return to an earlier phase of the shutdown as the virus has surged in the state and the country.

What of the future? For the venues in the Civic Center, the man in the unenviable position of the Decider is SFWMPAC Managing Director John Caldon — limited as he is by state and city health directives.

He told SF Classical Voice that much and more:

Timelines for reopening are governed at both the state and city/county levels.

As ‘concert halls,’ both Davies Symphony Hall and the War Memorial Opera House are slated to reopen as part of the State Resilience Roadmap Stage 4. Unless concert halls are moved to an earlier stage, or unless all of the stages move much faster than currently estimated, it will not be permissible to have public audiences in either facility before 2021.

That said, COVID-19 information is rapidly evolving. If major changes occur that shift the landscape, we will respond accordingly. It is certainly my goal to have these buildings back to business as soon as it has been deemed safe to do so by the health officer."

Can San Francisco get through all this, as it has in the past? ¡Sí, se puede! Or, to quote Edward Robeson Taylor’s “San Francisco”:

What glories have been hers, this radiant Queen
Of great Balboa’s far-outstretching sea,
Where, throned amid adoring subjects, she
Superbly looked impregnably serene.

Her jovial ones mayhap too oft were seen
The slaves of pleasure’s witcheries to be,
For life in its variety was free
As the ocean winds that sweep her fair demesne.

Yet cornucopias emptied at her feet;
Music made glad her ever-listening ear,
While Art for her the loveliest things unfurled;

Hers, many a memory of enchantment sweet,
And hers the song of Poets ringing clear
Amid the sordid tumult of the world.

UPDATED June 19: The latest cancellation news is no concerts at Davies Hall through Dec. 31.

Don’t expect any live opera in San Francisco until 2021.

How Gaetano Merola pulled off a coup and got his dream Salome.