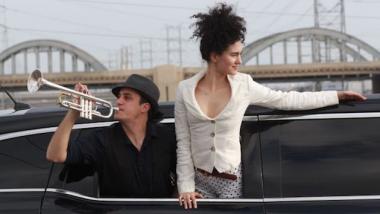 It’s surprises galore when you first encounter Hopscotch: a Mobile Opera for 24 Cars, an immersive operatic experience with an interactive album slated for publication on Jan. 13. Beyond what it is, how it was created, and other basic information, there is the format (a car-key-shaped USB drive) and the “project that redefined opera for the 20th century” verdict from Jim Farber, SFCV’s Los Angeles critic and reporter. What is Hopscotch? Let Farber explain what an organization called “The Industry” hath wrought:

The opera’s name goes back to Julio Cortázar’s 1963 novel of magical realism about an Orpheus and Eurydice story. The 36 chapters of Hopscotch are divided among three geographic routes — Red, Yellow, and Green – and 10 animated chapters. Taken together, they tell the story of Lucha, Jameson, and Orlando, beginning with Lucha’s car crashing into Jameson’s motorcycle. As she leaves the scene of the accident, she remembers how her parents died in a car accident, leaving her in the care of her grandfather, the first one to move to Los Angeles from Mexico.

For the opera performance, audiences traveled from site to site along three routes in groups of four; the limousines that carried them also served as intimate performance spaces. Although an overall narrative emerged, a version of the Orpheus myth with the genders reversed, each group saw the chapters of this nonlinear work in a different order.

Elizabeth Cline, the executive director of The Industry, is quoted by Maxwell Williams in a KCET feature about the coordination needed for logistics: “I can’t think of many cities where a small nonprofit like ours can sit down with a city’s department of transportation almost monthly to get advice on how to make an artwork.”

All told, more than 100 singers, musicians, and dancers performed. At the end, all the groups converged at a Central Hub for a climactic finale composed by Andrew Norman.

The other principal composers — all from LA — are Veronika Krausas, Marc Lowenstein, Andrew McIntosh, Ellen Reid, and David Rosenboom.  In addition, ten animations with music by gnarwhallaby were posted online to offer the basic points of the story to all audiences.

The new film provides an inside look at the logic and logistics of the innovative “Opera for the 21st Century.”

[email protected] Hopes to Go Live With “Gather” in July