“I don’t think I’ve ever been so excited about a new opera. It’s a totally different world for me creatively — with a sense of magic realism, dark poetry, beauty, humor, immense drama, and many surprises.”

Jake Heggie sounds rhapsodic when he speaks about his eighth full-length opera, If I Were You, which will have its world premiere by the San Francisco Merola Opera Program, which commissioned the work for its 62nd season this summer.

The 2019 Merola Summer Festival features 29 young artists, selected from more than 800 applicants around the world. In addition to the Aug. 1-6 premiere of the work by Heggie and librettist Gene Scheer, the singers will perform in the Schwabacher Summer Concerts (July 11 and 13) and Merola Grand Finale (August 17).

In the novel If I Were You, Julien Green’s 1947 Faustian fantasy, the devil enables a young man to transfer his soul into other people’s bodies. It is about “a quest for your place in the world,” Heggie said, writing for six major roles in addition to the hero — and the devil will be a “beautiful soprano.”

Capitalizing the adjectives BIG and JUICY, Heggie says the roles in his opera are “dramatically varied and incredibly demanding, and the score is written for big operatic singing.

“In addition to arias and ensembles, there are some big choral moments that pushed me into new harmonic territory. Gene Scheer has crafted his most masterful libretto — filled with invention and remarkable, achingly beautiful language.

“We have a dream team of collaborators with director Keturah Stickann and conductor Nicole Paiement, plus the Merola singers and pianists. It’s my eighth full-length opera and honestly, I don’t think the audience will know what hit them,” Heggie said.

The composer is especially glad “to shine a special spotlight on the Merola program and the remarkable things it does. Anywhere I go in the world for one of my productions, there seem to be numerous Merolini involved. This is a special way to give back, and I’m deeply honored that they chose me for their first opera commission.”

The 2019 season, says Merola Executive Director Jean Kellogg, is “a dream come true: after six years of imagining, planning, negotiating, and fundraising, our first ever commission is coming to fruition! We went for the gold with Jake Heggie and Gene Scheer and it has resulted in an absolutely brilliant collaboration in If I Were You.

“It is a challenging work, written expressly for young professional voices, offering meaty and plentiful roles in a story the is both historic and timely. The excitement is already palpable, with the Merolini eagerly awaiting their first opportunity to create a brand-new role under the guidance of the creators.”

Soprano Esther Tonea, who sings the role of Diana in the opera, who is “more excited with each passing day,” talked about the upcoming performance:

This has an extra level of thrill because it is a world premiere. Every time I look at the score I see it in a different light, recognizing the motifs and character relationships Jake and Gene have incorporated to make this piece come to life.

I have a feeling that the voice of this opera will change our own voices as artists and scholars. I'm excited to see all of the layers unfold as we move from coachings to music and staging rehearsals to working with the orchestra. Putting together an opera is thrilling; putting together a world premiere of this caliber is something I will always be grateful for. I'm incredibly thankful to have been given this opportunity." 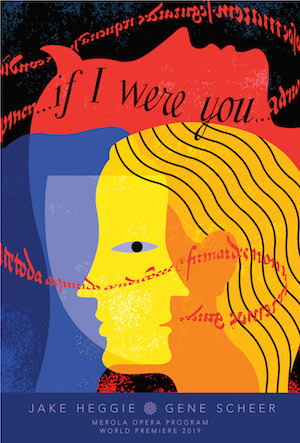 Tonea was part of a panel on Feb. 28 at the Merola Member Preview for If I Were You, along with Heggie, San Francisco Opera Director of Musical Studies Mark Morash, former Adler Fellow Renée Rapier, and dramaturg Kip Cranna.

Aware of audiences “who are a bit shy of new opera,” Kellogg calls attention to the Schwabacher Summer Concert and Merola Grand Finale, which “offer the drama and lusciousness of standard works such as Lucia, Faust, and Trovatore, along with some great Puccini and Strauss scenes that will show off those dramatic voices of the future.”

The Schwabacher Summer Concert will be conducted by Craig Kier, director of the Maryland Opera Studio, and directed by Jose Maria Condemi (Merola 1999/2000), now on the faculty of the S.F. Conservatory of Music.

It was a group effort that brought home Mozart’s final Italian comedy at Merola, all the way down to the apprentice coaches.