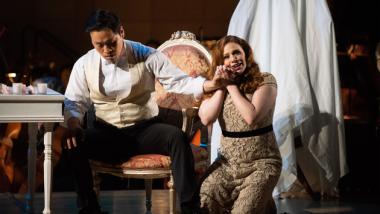 The turbulent, roiling music of Samuel Barber’s Vanessa, performed in white heat by the orchestra and two mighty voices, pushed me back in my seat — and in my mind’s eye, I saw a familiar face with a warm, beatific smile.

The late James Schwabacher would have been utterly delighted by the Thursday night opening of the 2018 Merola Opera Program’s series of public performances.

The Schwabacher Summer Concert, named for one of the Merola Program’s founders and greatest supporters, had the sound, look, and feel of a season finale, even if the behind-the-scenes intensive training of young artists started only a month before, with the Grand Finale still a month away.

Among some 30 Merola opening concerts I’ve seen, many provided great discoveries, but the intensity of the entire 2018 edition, resounding in the S.F. Conservatory Concert Hall, seemed unique.

For years now, S.F. Opera Center Director Sheri Greenawald has changed the usual arias-and-duets parade to a few — usually four — substantial excerpts from operas. On Thursday, even with a bit too much of George Bizet’s The Pearl Fishers, the formula worked superbly.

Under Kathleen Kelly’s dynamic musical direction and former “Merolina” Aria Umezawa’s restrained staging, the Schwabacher Summer Concert provided four operas for the price of one, and an excellent showcase for the singers to perform, rather than “stand and deliver.”

The Barber opener for the concert was Act 1, Scene 1 of the opera, with Brittany Nickell in the title role, Megan Grey as Erika, and Brian Michael Moore as a theatrically outstanding Anatol, a role that in lesser hands turns into a cardboard figure.

Even with the orchestra raging behind them — Kelly’s interpretation being more agitated than heard in most productions — Nickell and Grey effortlessly dominated the music. Then, against all the preceding histrionics, Grey created a hush in the hall with a sensitive, affecting performance of the aria “Must the winter come so soon?” (Former “Merolina” Joyce DiDonato’s illuminating master class dealing with the aria is here.)

Once again, Kelly’s orchestra throve apace and once again the conductor secured the primacy of voices. Kendra Berentsen appeared in a fleeting moment, which couldn’t have prepared the audience for what she was about to do after intermission.

As Leïla, the Norma-like priestess with a secular appetite for romance, Berentsen shone in the extensive Pearl Fishers section of the evening, excerpts from three acts adding up to the entire (slender) drama of Bizet’s opera.

A lyric soprano, with more than a hint of steel in her voice, Berentsen impressed in the recitative and cavatina “Comme autrefois dans la nuit sombre” (As before, in the dark night) and the dramatic duets, first with WooYoung Yoon’s Nadir and then with SeokJong Baek’s Zurga — the former an initially reluctant love scene, the latter a desperate entreaty for Nadir’s life.

One of the greatest final scenes in all opera, Don Giovanni’s descent to hell, served as a heavenly finale to the concert, Xiaomeng Zhang in the title role, a mighty antihero facing down the Commendatore, with Jaeman Yoon as the Stone Guest, Nickell as Donna Anna, Nahhas as Donna Elvira, Berentsen as Zerlina, B.M. Moore as Don Ottavio, and Andrew Moore as Leporello surrounding the center of action... complete with the now-you-see-him/now-you-don’t disappearance of Giovanni. (And a directorial misstep of Leporello’s distracting groping of Elvira.)

Glad to report that Zhang reappeared, taking several rounds of bows with the entire group, as impressive a collective debut as any in Merola history.

Aleksey Bogdanov Jumps Into the Spotlight With Boris

The baritone is hitting his prime and working harder than ever.