The Los Angeles Philharmonic is picking things up where it left off. Today, the orchestra announced its 2021–2022 season. After 19 months away from Disney Hall, the LA Phil will return to its home venue in October, with a full schedule that gets back to some signature projects the ensemble had planned pre-pandemic.

Top of the list, the orchestra’s Power to the People! festival, which was curtailed in March 2020 by COVID-19 cancellations. The artist-meets-activist message closes out the upcoming season, with a handful of programs in May and June 2022: William Grant Still’s “Afro-American” Symphony, the long-slated premiere of Ted Hearne’s opera/oratorio Place, and more.

The LA Phil picks up another thread at the end of the season, its Pan-American Music Initiative, which gets underway this summer in concerts at the Hollywood Bowl. It’s more music of the Americas from the orchestra’s music and artistic director, Gustavo Dudamel. He conducts a trio of programs in May 2022 pairing Stravinsky (The Firebird, Petrushka, The Rite of Spring) with ballet scores by Latin American composers.

New music abounds like always this upcoming season, with two dozen LA Phil-commissioned works on the calendar. Gabriela Ortiz, who joins in as curator with the Pan-American Music Initiative, gets two world premieres: a new work on the first concert back (Oct. 9) and her Violin Concerto, later in the season. Thomas Adès also curates a set of programs, the Gen X festival —a generational follow-up to Power to the People! — which sees the premiere of his completed Dante (April 28–30).

The regular series are back too, from the composer-focused Green Umbrella concerts to the star-powered Colburn Celebrity Recitals to a smattering of jazz programs overseen by the LA Phil’s creative chair for jazz, Herbie Hancock. The orchestra will also film a third season in its Sound/Stage series, a pandemic development — free, short concerts online — that’s sticking around.

Then there’s the truly new. The LA Phil devotes a week (Nov. 14–21) to the cutting edge in film scoring with Reel Change: The New Era of Film Music. And in April, the orchestra partners with Deaf West Theatre for a production of Fidelio — also a chance for Dudamel to show off his newly appointed operatic chops.

The LA Phil’s music and artistic director will not change his L.A. schedule as he takes up his second top position.

The orchestra’s live performance in front of 4,000 essential workers was an emotional and artistic thrill. 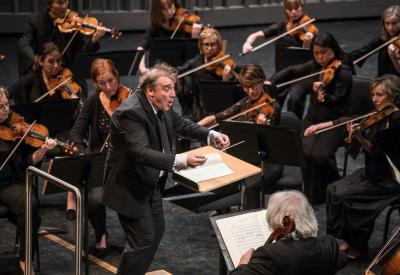 Pacific Opera Project Goes for the Fantasy This Season

Andris Nelsons and the BSO Explore the Outer Shostakovich Symphonies