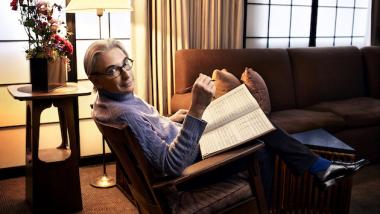 As Michael Tilson Thomas is about to open his 25th and final season as music director of the San Francisco Symphony, he is much too busy to sit down for a retrospective of his distinguished career, his history with San Francisco, which he first visited as a child 70 years ago, and the orchestra he first led in 1974, conducting Mahler’s Symphony No. 9. So, we turned to a reliable source on the subject: his own summing up 26 years ago.

The year before MTT became the SF Symphony’s 11th music director in 1995, he published Viva Voce: Conversations with Edward Seckerson, a lengthy, substantive collection of interviews dealing with many aspect of his life and career. A few excerpts from Viva Voce, beginning with Seckerson’s description of MTT’s “insatiable curiosity”:

He’s regarded as a Russian specialist, an American specialist, prime mover for the music of Ives and Ruggles, champion of Gershwin, keeper of the Bernstein legacy; he is a natural Mahlerian, a devoted Francophile, a willing activist in the cause of new music...

Asked what the single most difficult thing about conducting is, MTT says it’s “the bow at the beginning,” and explains that he has always found the transition from entering the stage to conducting the music a challenge, but developed a routine to deal with that.

It is the great Hebrew prayer of blessing, the Shehecheyanu. I say this prayer to myself just before I go onto the stage. Then I can cross over the border. I can float up the stairs.

I can come ’round the orchestra. I can adjust my pacing so it will work out right as a I step onto the platform itself. I can greet everyone. I can do everything that I have to do — and yet I’m already in the place where the music is going to begin.

Apropos the Sept. 4, 2019, SFS gala celebration of honorees Michael Tilson Thomas and his husband Joshua Robison — “together 43 years, married for 4 ½ years” — the conductor rarely commented on the issue in the past and Viva Voce doesn’t touch on equality and discrimination, but two years ago when the SFS presented Symphony Pride on the eve of the orchestra’s East Coast tour, it had just cancelled two scheduled concerts in North Carolina in response to discriminatory legislation there. MTT said this:

This special evening honors the essential contributions that LGBTQ composers have made in shaping the American musical sound. One of music’s greatest roles is to bring people together. I am proud to join with the musicians of the San Francisco Symphony and my dear friend Audra McDonald in presenting an evening that celebrates and honors the spirit of our community.

This concert also offers me the opportunity to express my appreciation for the generous welcome extended to me and my husband Joshua Robison since our arrival here.

A simple, but oh-so-difficult question from Seckerson: What is the role of the conductor?

The conductor is there because someone must unify all the different talents, perspectives, past histories, reaction times, and perceptions of a number of different people who have come together to perform a given piece of music.

This is terribly important: performers have such different pasts with respect to a piece, and such different ideas about the what the piece is. They must be in agreement about what the reading will be on one particular occasion. So, in a piece of orchestral music, it’s the conductor who’s trying to indicate the leading edge of the performance. …

Nowadays the conductor is particularly important because the [musicians] who sit at the back of a very large orchestra do not hear things that are going on in the center or on the opposite side in the way that, ideally, they should — at least not in most halls. So, the conductor is there to be a guide, to listen, and give indications of balance, phrasing, breathing, and pacing; to caution and to encourage.

Perhaps my favorite composer in the earliest years of my life. I can’t remember a time before I knew Petrushka and The Firebird, largely because my grandmother [Bessie Thomashefsky, actress and activist] used to sing all the tunes that came from Petrushka and even some from The Firebird.

Sacre [The Rite of Spring] was a record that I loved so much that I played right through it [the stylus carving up the 78 RPM shellac record]. I have early memories of seeing Stravinsky conduct some small pieces, and seeing this very thin, gangly man coming out and making music that sounded quite unusual.

What I can remember absolutely clearly is seeing him conduct Rossignol [The Nightingale], complete, when I was around 10 or so. It made such an impression upon me to hear that whole score. From then on, I insisted on going to every Stravinsky concert possible.

His bizarre Bayreuth history, at the Wagner Festival, to which he was invited from Boston by Friedelind Wagner:

I was in the master classes that she [Friedelind Wagner] had there. That summer one of the members of the coaching staff got ill, so they suddenly had to have a pianist coach come in, at a day’s notice, and I got the job, playing stage rehearsals, some with Karl Böhm and Pierre Boulez.

I was definitely the low man on the totem pole there, so I had “Nibelungen Dienst” [Nibelung duty]. A few times a week, I had to go in and rehearse the Nibelungs. This meant being down in the deepest crypt of the Festspielhaus. I gathered together the Nibelungs, who were all dancers of the company and had to train them to scream on cue.

I played the preceding orchestra parts on the piano, and then yelled at them “Ein, zwei, drei, SCHREI!” and they gave this great scream on cue. It was one of the silliest things I have ever done.

That and an unusual freezing summer in Bayreuth combined to make MTT flee the place: “I couldn’t take it anymore,” so he gave up on Wagner and opera ... for a while. The episode also led to a chain of events that launched him on a great career. How? I recommend Viva Voce for the answer and for much else. NOTE: The book is currently out of print, but available from used booksellers.

A whimsical concert opener memorializing Agnes Albert is an elaborate play on the letters in her name.