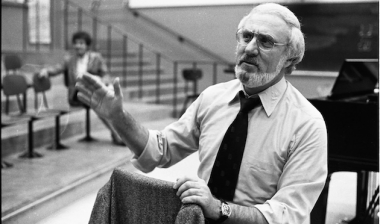 Once upon a time in Los Angeles there were five full-time classical music critics on staff: Mark Swed at the LA Herald Examiner; Rick Ginell at the LA Daily News; Alan Rich at the LA Weekly; I was at the Copley newspaper, the Daily Breeze; and Martin Bernheimer sat atop the pyramid at the Los Angeles Times. We represented the loyal opposition.

Like Zeus atop his Mount Olympus, Martin represented the paper of record, dispensing his judgments in skillfully worded prose that he enjoyed accenting with pet phrases like “hemidemisemiquaver.” Imperious by nature, falsely modest in print, he liked to refer to himself as “Your faithful scribe.”

His writing could be exceedingly positive or devastatingly brutal. He could eviscerate a performer with rapier-like accuracy. Those at the receiving end of a negative review from Martin Bernheimer would not soon forget it. He particularly enjoyed saving his cumulative witty vitriol for the end of the year, when he would publish the winners and losers of his notorious “Beckmesser Awards,” named after the hopelessly unmusical antagonist in Wagner’s Mastersingers of Nuremberg.

No one questioned Martin’s credentials. No one read his reviews without respecting his skill as wordsmith. He remains the only Los Angeles music critic to have ever received a Pulitzer Prize.

But he didn’t always get it right. He was completely wrong about the significance of the minimalist movement, dispatching composers like Terry Riley and Philip Glass as factory hacks turning out “Xeroxed arpeggios.”

He could also be supportive of younger writers (as Rick Ginell mentioned in his recent LACO review for SFCV). And when I was first starting out (back in the age of typewriters), I found myself on a panel with Martin conducted by Michael Milenski, the artistic director of the emerging Long Beach Opera. Martin consistently treated me as a valued colleague, and I never forgot that.

I remember an audience member asking how Martin differentiated in his reviews if he was covering the Los Angeles Philharmonic or a far-less professional orchestra or soloist? His response (which I have often wrestled with myself) was, “They are both playing the same notes. Either they are playing them accurately or they are not.”

I once wrote a piece comparing the life of a first violinist in the LA Phil with a first violinist/soccer mom in the Beach Cities Symphony. Exploring the human reality of that story made me feel that Martin’s opinion was cold-blooded, that it lacked compassion for the experience less-than-professional musicians gained from gathering together to play Mozart or Mahler. How do you calculate that in a review?

I will end this little reminiscence with a story.

During the days of Metropolitan Opera’s intermission feature, The Opera Quiz, on which Martin was often a panelist, the moderator asked:

It’s Saturday morning. You’ve settled into your most comfortable chair to listen to the Met broadcast. But just as it’s about to begin there is a knock on the door and friends arrive unannounced. What do you do?

Martin Bernheimer’s response was, “It’s not a problem for me. I don’t have any friends!”

A critic’s thoughtful essay looks at the recent history and near future of arts journalism.

Or is there a coming crescendo as the craft finds its feet in a new millennium?

Robert Paul Commanday, who died last night in his Berkeley home at age 93, was a prominent presence and inspiring gadfly to generations of musicians, audiences, and journalists.