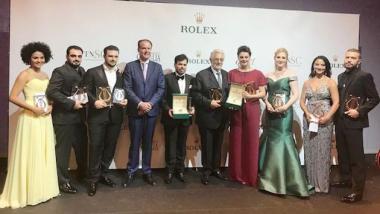 At the 26th-annual Operalia world opera competition Sunday in Portugal’s Teatro Nacional De São Carlos, mezzos ruled at an unusual final concert without a single soprano. The final competition was streamed free by Medici.TV to a large worldwide audience.

Plácido Domingo founded Operalia in 1993 to help launch the careers of promising young opera singers between the ages of 18 and 32. Out of some 1,000 applications annually, 40 are selected, who then participate in a week of activities with Domingo and others before competing in three rounds of performances.

Domingo, 77, continues nonstop activities as performer around the world, while also serving as general director of the Los Angeles Opera. The tenor (now baritone), who made his first professional appearance 61 years ago, will be hosted by the San Francisco Opera for a recital in the War Memorial Opera House on Oct. 21.

In Lisbon yesterday, Emily D’Angelo, 23, a tall Italian mezzo who lives in Canada, took most of the awards, including the top prize among women. American mezzo Samantha Hankey, 26, hailed for her Cinderella in last year’s Merola Opera Program and a winner of the Metropolitan Opera National Council Auditions the same year, took second place, and shared the Birgit Nilsson Prize with D’Angelo. 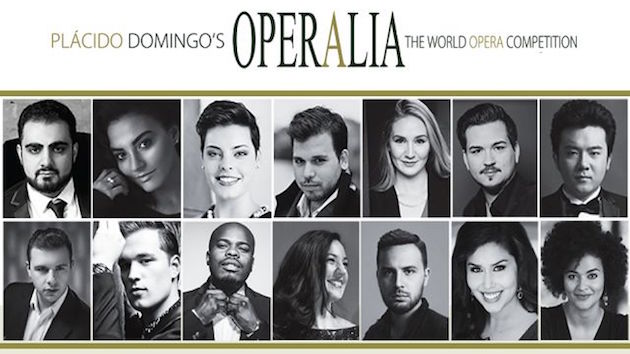 A prominent Merolina was among Operalia’s four accompanists, who played in all the preliminary rounds before Domingo conducted the Lisbon Orchestra at the finals. Tamara Sanikidze was Merola apprentice coach in 2009; she and her sister, Nino Sanikidze, have been assisting Domingo for more than a decade. The other 2018 accompanists were Myra Huang and Israel Gursky.

Correction: As originally published, this story included an incorrect photo for Samantha Hankey. The original photo was of Adrienne Finch.