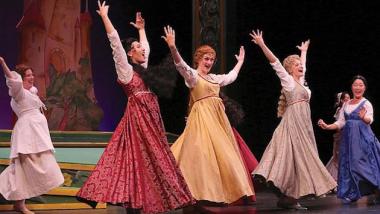 The Mikado in Italy: Leave the Fan, Take the Cannoli

Since 1885, the Gilbert and Sullivan Mikado has opened with:

We are gentlemen of Japan:
On many a vase and jar,
On many a screen and fan
We figure in lively paint:
Our attitude’s queer and quaint ...
You’re wrong if you think it ain’t, oh!

But here we are, 131 years later — Sunday, August 7, 2016, to be exact — in Walnut Creek’s Lesher Center for the Arts, and the opening of the new Lamplighters production of The Mikado is transformed as the company’s crackerjack chorus sings:

We are gentlemen of Milan;
Each a passionate avatar
Of the lofty pursuits of man
In sonnet or ode sublime,
Excelling in verse and rhyme ...
Parnassian heights we climb, oh!

The Mikado, or the Town of Titipu is now The New Mikado — Una Commedia Musicale!

The action has migrated to the town of Tiramisu ... No, sorry, I got carried away. It’s Tirmisu. The new lyrics, “based on William S. Gilbert’s,” are by Lamplighters Music Director Baker Peoples and Artistic Director Emeritus Barbara Heroux, with participation by several company members.

Modifying the text, venue, and costumes (by Miriam R. Lewis, managed by Judy Epstein) may concern or even upset some tradition-bound G&S fans (is there any other kind of G&S fan?), but there are good reasons for trying something new:

— This Mikado is the Lamplighters’ 22nd production over the years of what is one of the world’s most frequently performed pieces of musical theater.

— There have been many recent objections to the portrayal of Japanese, to “yellowface” productions, even more than to Puccini’s make-believe world of Madama Butterfly and its ilk elsewhere in Asian settings — Turandot, The King and I, and others. (The only valid antidote I know to false representation of Asians in Western musical theater is Stephen Sondheim’s Pacific Overtures, where Japanese and Western characters are reversed.)

— Overly rigid adherence to theatrical tradition is not a good thing. As Rupert Christiansen wrote in The Telegraph: “Literalism is the death of good theatre and can only lead to the sort of barnacled tradition associated with the old D’Oyly Carte. Realistic reconstruction runs as many risks as any other approach: baggy tights, silly wigs, and wobbling backcloths can ruin great drama sooner than you can say Spamalot.”

All these factors play into the wave of Regieoper, the German “director’s opera,” which often wanders into the Eurotrash zone. This approach is definitely finding local support.

At San Francisco Opera, the summer season offered the U.S. debut of Europe’s most controversial director, Calixto Bieto, in a surprisingly mild-mannered Carmen. At the same time the Lamplighters were presenting their doctored Mikado, Festival Opera offered Mozart’s Abduction from the Seraglio as a Star Trek adventure. Clearly, something is going on here beyond political correctness about foreign cultures, although nobody seems worried about the Italian stereotypes substituted in Walnut Creek.

So how was the play, Lincoln-san? Under the knowing and dynamic baton of Peeples, the modest orchestra played as if inspired by tarantella and produced a big, properly Italianate sound. The G&S-sized chorus, especially the women, channeled the Mormon Tabernacle Choir.

On stage, the gorgeous lyric tenor of Mason Gates as Niccolù (Nanki-Poo, son of the Mikado-Ducato) and Patricia Westley’s sonorous Amiam (Yum-Yum) provided an exemplary leading pair, aspirants to union against all odds. There will be no spoilers here about chances of a happy ending or, as they say in Tir(a)misu, lieto fine.

Theatrically, under the thoughtful direction of Ellen Brooks, the entire large cast did well, even if most vocal performances were less impressive, at least in the Sunday show of the double-cast production, so look for Charles Martin or Wm. H. Neil as Poobà; F. Lawrence Ewing or Samuel Rabinowitz as Coco; Sonia Gariaeff or Anne Hubble as Catiscià.

The two lovers in the other cast are Erin O’Meally as Amiam and Patrick Hagen as Niccolù. Upcoming performances are Aug. 13-14 in the Mountain View Performing Arts Center, Aug. 19–21 in the SF Yerba Buena Center for the Arts, and Aug. 27–28 in Livermore’s Bankhead Theater.