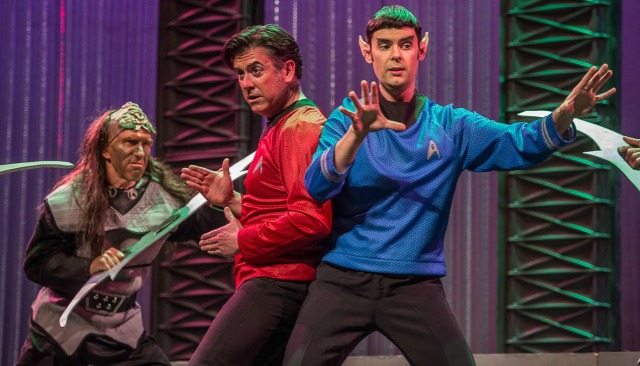 Director Josh Shaw’s 2014 production of Mozart’s The Abduction from the Seraglio, was conceived as a parody. Shaw, then a 35-year-old director, designer, and former opera singer imagined a mashup of the original singspiel, and Star Trek, the TV series created by Gene Roddenberry that first aired in 1966.

Shaw, who is co-founder and musical director of the Pacific Opera Project (POP), had played with mashups before: He fused Così fan tutte and Gone With the Wind and Le nozze di Figaro and Scarface. For Abduction he became drawn to the title and particularly to the word “abduction,” which for no particular reason made him, think of ‘alien abduction.’

“I don’t know where that came from,” he told us the other afternoon. “Who knows?” Not from Whitely Streiber’s best seller, Communion, rather just out of thin air.

Originally, Shaw thought of mashing up Mozart and George Lucas’ Star Wars, but after looking more closely he turned reluctantly to Star Trek. But then as he explored the characters and plots, he began to see possibilities. He was also attracted by the producers’ travails on the original Star Trek. “They were always out of money, always in fear of being cancelled, stuck with recycled sets, and I thought, ‘well I can certainly relate to that.’”

Shaw’s opera premiered at the Southern IIlinois Music Festival. The entire costume and set budget was under $2,000. The show has been famously successful ever since — and will play in a Festival Opera presentation, August 5-9 at Holy Names University in Oakland, and then for one night in September in Los Angeles at the Ford Amphitheater. That last production’s budget is $50,000.

The Art of Mashup

The word mashup came into widespread use in the culture in about 2010. It has come to convey the opportunities in fusion, but in this case it also suggests an insight into how to catch the zeitgeist and how to use that to re-energize opera.

What’s interesting about mashups is that they inevitably involve theft, a makeover of previous material. As an aside, in this case, one element in the mashup is itself a mashup. The libretto of Abduction offered to Mozart — who charitably found the quality “not of the best” — had been partly plagiarized from a work by Christoph Friedrich Bretzner. It was Bretzner’s one great work and he “complained loudly and publicly about the theft.”

Shaw’s mashup changes little in Mozart’s singspiel; the music is the same, and what changes there are to the libretto are designed to deal with translations from the German that no longer make sense or seem badly dated or are just too repetitive. Moreover, the plot remains intact. Interestingly, the original libretto reflected a clear racial bias against the Turks, who Shaw recast as Klingons.

“My main focus,” said Shaw, “is just to make opera more accessible to the average person and that’s the idea behind the concept. This is a ‘rescue opera’: Two girls are kidnapped by a bad guy and their boyfriends come and get them.”

As for whether there should be boundaries on what artists can take from other artists in a mashup, Shaw replied he didn’t have the luxury of being able to worry about such things: “I’m doing whatever I can to make it work on a particular budget and to appeal to an audience.”

But then he reconsidered and was of two minds. On the one hand, he sees the value of the “open source” nature of opera, facilitated through YouTube for example. “On the other hand, nothing irks me more than when I see another director blatantly steal something I’ve done.”

He would not elaborate; saying only a unique concept he had developed was taken by someone else.

“The truth is when we do it, we call it ‘borrowing’; when someone else does it we call it ‘stealing’. It’s a topic that’s never discussed, but should be. The problem is, how do you trademark a concept. It’s not like a script. But the real problem is that no one has the time to really care; you’re doing everything you can to take what you have and make it work.”

Josh Shaw is one of those front line troops in the arts whose work at POP might seem to be of little consequence, but he’s actually thinking about forging the new form and function of opera in America.

“I don’t know where opera is going these days. But I will say that we are learning a lot about creativity and efficiency. We’re always working on a miniscule budget, compared to other companies, and what you realize is that you don’t have to spend millions of dollars to produce a great product. It’s just that so many things have become entrenched in the production of opera that don’t have to be there.”

“I hate to say this but the union stuff drives me crazy. For example, when I go to work at a union house, I know they’re paying someone $35 an hour to lower a curtain twice in the show, whereas I can get a chorus member for the entire time and it costs me zero. It’s those kinds of things that add up so quickly.”

“Everyone is doing much more than required. But that’s the new nature of opera: it’s all about efficiency and saving time.”

For example, Shaw has become obsessed with fine-tuning organization. He found from his own experience that he couldn’t stand rehearsals where the director didn’t come prepared and made decisions on the spot. And so Shaw spends many hours carefully plotting out rehearsals. He sends out 90 percent of the blocking beforehand. “The result is that you come in and you may have saved a whole week of rehearsal.”

In addition, all rehearsals are videotaped and sent out on a private link to all singers. “Then they can watch and say to themselves, ‘oh my God, I look like an idiot doing that.’ They see in a moment what otherwise might take 10 minutes to explain. It’s all just a bunch of simple common sense things we’ve discovered along the way that make things go faster.” 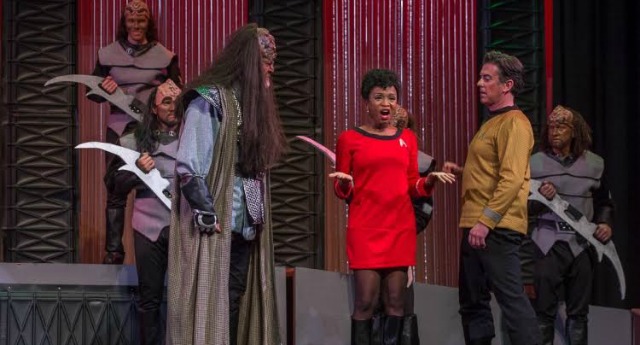 A Gaze Into the Future

Talk to opera people these days and the forecast is mixed, but Josh Shaw, for one, is optimistic.

“We’re still here, I keep telling people. Companies are springing up all the time. And actually this is a very exciting time to begin a career as a singer. There are so many smaller companies, like Festival Opera in Northern California and Pacific Opera Project that are dying to give younger people ‘work’— I wouldn’t say a job because you’re not going to be paid a living wage but you will get some money and experience.”

The local venue, seating 100 to 500 people, which is good for the audience that now, perhaps just 50 feet away, has a much better chance of being, as Shaw puts it, “hit in the face” and caught up in the excitement that’s only possible in an intimate space. An excitement that’s also reflected by the performers.

“Let’s talk about San Diego and Los Angeles,” said Shaw. They’re doing what we’ve been doing for the last five years. They’re caught up in trying to reach younger audiences and present more fun and experimental work, even some far out stuff. The L.A. Opera offered a Figaro set in Los Angeles and sung in English; we did that three years ago. Clearly smaller seems to be at least a supplementary way to go.”

These new small companies might appear as the equivalent of startups, but Shaw notes the difference: “The similarity is creative people sitting around a table, looking for a breakthrough of some kind, but most of us aren’t looking to become like Google; we’re looking to grow but the goal is not to become competition in any way with L.A. Opera. We’re looking to be a 300-seat theater that does, say, 10 performances of something.”

Shaw’s parody mashups are gaining him attention, maybe, because they take a knowing look at both opera conventions and American popular culture conventions.

“Think about it this way,” said Shaw. “Mozart is the most famous composer and Star Trek is one of the most well-known icons in American culture. It’s really hard to find any other franchise quite like it, in any genre…But the truth is, I don’t get it.  During my initial research I watched 25 episodes and it was kind of painful. I like the more recent versions, but the original? It was just plain bad.”

The Festival Opera presentation will be at the Valley Center for the Performing Arts. August 5, 6, 8, 9.  In English, with subtitles. Michael Morgan conducts the Oakland Symphony Orchestra, supported by the Festival Opera Chorus. The ensemble features tenor Brian Cheney as Belmonte, soprano Shawnette Sulker as Constanza, tenor Robert Norman as Pedrillo, and soprano Sara Duchovnay as Blondie. Bass Kevin Thompson is Osmin, the grumpy overseer of the seraglio. To order tickets go to the Oakland Symphony box office's secure ordering site, You can also call 510.444.0802 to order by phone Monday–Friday during business hours.