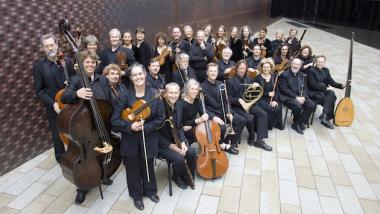 The Philharmonia Baroque Orchestra is fast becoming a “Baroque and beyond” orchestra. The recently announced 2018–2019 season will be every bit as exploratory. The orchestra tackles everything from Monteverdi to Schubert, then drops in another contemporary composition from Caroline Shaw.

Back in the day when early music was an insurrectionary offshoot of the classical world, founding members of Philharmonia Baroque Orchestra probably would not have envisioned the kinds of season that the orchestra now regularly programs under Music Director Nicholas McGegan. As the orchestra prepares to wind up its subscription season with a Beethoven bash starring highly touted contralto Avery Amereau, the next season promises continuity with this one.

Then the orchestra follows up its first-ever collaboration with Juilliard 415, the early music orchestra of the Juilliard School, by bringing the students back for a Vivaldi concerto program. That program forms the basis of a PBO Sessions presentation, at San Francisco’s ODC Theater on Nov. 8, tracing the backstory of the rise of the early music movement.

In February, violinist Rachel Barton Pine plays the Franz Clement Violin Concerto (1805), a piece she learned for its premiere recording, after it was discovered by the British musicologist Clive Brown. Beethoven lovers may know that Clement was the virtuoso for whom big B wrote his concerto, and apparently the Clement concerto was in his ears as he wrote, as several similarities attest.

March brings Handel but also Arvo Pärt and the completion of Caroline Shaw’s PBO-commissioned song cycle with Anne Sofie von Otter as soloist, and in duet with countertenor Daniel Moody. That show will also be brought to New York’s Alice Tully Hall on March 12.

There’s no turning back the clock for this ensemble.

Wozzeck Wows With Salonen and Philharmonia

In Wozzeck's return to the Bay Area, conductor Esa-Pekka Salonen led London’s Philharmonia Orchestra in the kind of brilliantly authoritative performance that left no doubt as to the enduring power of Alban Berg’s masterpiece.