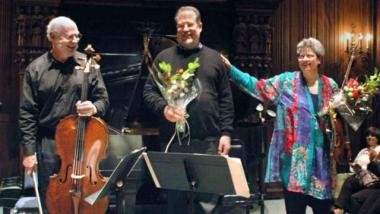 Michael Grebanier, the San Francisco Symphony’s principal cellist for the past 43 years, died on Dec. 19. The Brisbane resident was 82 and still on the orchestra’s active roster, although he had not played for some time, being in ill health.

SF Symphony cellist Barbara Bogatin said in a Facebook post: “Michael’s playing was a model of elegance, beauty, and musicality. Colleague, friend, leader, ardent union supporter — he will be missed.”

Violinist Ellen Pesavento commented: “We lost another wonderful man and an extraordinary musician.”

Grebanier, occupant of the Philip S. Boone Chair, joined the SF Symphony as principal cellist in 1977. He studied with Leonard Rose at the Curtis Institute, and at age 19 he won the Walter Naumburg Competition and made his solo debut in his native New York City.

He was a member of the Cleveland Orchestra for four years, and at 25 became principal cellist of the Pittsburgh Symphony, the youngest first cello in that orchestra’s history, serving there for 14 years.

With pianist Garrick Ohlsson and former SF Symphony Associate Concertmaster Jorja Fleezanis, Grebanier formed the FOG Trio, and he was affiliated with the Marlboro and Casals festivals.

He recorded the Prokofiev cello sonatas and the complete music for cello and piano by Rachmaninoff (Naxos). His instrument was a 1698 cello by Francesco Ruggeri of Cremona.

In 2011, Grebanier underwent back surgery, but later rejoined SF Symphony and the FOG Trio.

* It’s piccolo player Catherine Payne’s 25-year anniversary as a member of the SF Symphony. She was the first musician hired by Michael Tilson Thomas after his appointment as music director. Watch Payne’s “Meet the SFS Musicians” video.

* Sabbaticals during 2020: violinist Cathryn Down.

Fisher steps down in December 2020, to be succeeded by Priscilla B. Geeslin.

Few concerts stand out so prominently as this current subscription event by Michael Tilson Thomas and the San Francisco Symphony.