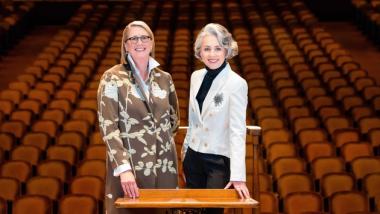 SF Symphony President Sakurako Fisher is stepping down. Announced today, Fisher will be leaving the post in December 2020. Priscilla B. Geeslin, currently a vice president on the Symphony’s Board of Governors, will succeed her.

Fisher has navigated changes of all kinds since taking over as president in 2012. An early challenge was the 2013 musicians’ strike, which ended after 18 days — a far cry from the most recent contract negotiations, approved in 2018 without fuss. During her tenure, Fisher has overseen the departure of a chief executive, Brent Assink, as well as the appointment of his replacement, Mark C. Hanson. A shift on the artistic side of things has occurred as well; Michael Tilson Thomas retires at the end of the 2019–2020 season, to be replaced by Esa-Pekka Salonen and a board of artistic advisors. Fisher departs as president several months into the new setup.

“In a time when change is the new normal,” Fisher said in a statement released by the orchestra, “I continue to be strengthened by not only the music and musicians of this fantastic orchestra, but also by the commitment of both the board and staff to be fearless in the face of change.”

The four-year agreement continues to place S.F. Symphony at the top of the orchestral pay scale.