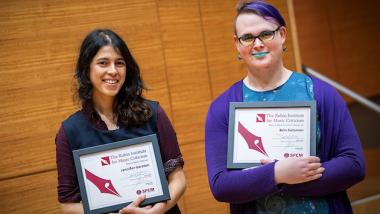 The Stephen and Cynthia Rubin Institute for Music Criticism has concluded its biennial mission and crowned two of the country’s brightest young music critics. After a week of intensive writing and workshops and, of course, concerts, the Institute’s panel of distinguished critics selected Jennifer Gersten, a DMA candidate in violin at Stony Brook University as the winner of the $10,000 Rubin Prize in Music Criticism. Brin Solomon, an MFA candidate at New York University was runner-up, winning a $1,000 prize in a closing ceremony held on Monday.

Anne Midgette, speaking of Gersten’s selection, said “Jennifer's reviews were filled with trenchant observations, wit, and authority. More to the point, they were so well written — whether describing a jazz singer’s costume so vividly you felt you were in the room with her, or dryly dismissing a new work as ‘John Williams without the melodies’ — that they were always a pleasure to read.”

In addition to her study of the violin, Gersten is an accomplished writer: She received her B.A. at Yale University in creative writing. She is a senior editor for Guernica: A Magazine of Global Arts and Politics and has held internships at NPR Music and the Toledo, Ohio-based paper The Blade. Her reporting, essays, and music reviews have been published or are forthcoming in The Kenyon Review Online, The Awl, NPR Music, Guernica, Harvard Magazine, WQXR, and Bachtrack.

The prizewinners were chosen from 18 participants from around the country. In his closing remarks, S.F. Conservatory President David H. Stull conveyed the panel’s pleasure in the high quality of work that the young writers did, commending them as “not only outstanding writers but believers in the future of music and in their ability to contribute on an ongoing and permanent basis. I am deeply grateful to Steve Rubin for his tremendous support of this program and to Gordon Getty for his vision of advancing criticism in the United States in perpetuity.”

The two winners will be eligible for internships with SFCV, where they will be able to file reviews for publication and consult with mentors Tim Page and Allan Kozinn.

Hope for the vanishing music critic: the Getty Foundation, Rubin Institute, and S.F. Conservatory underwrite a music critic at The Boston Globe.

Is classical music criticism a mortally endangered art form? Top critics at the Rubin Institute for Music Criticism say itʼs actually in a golden age, in some respects. Read the report to find out why.