Administrators didn’t expect to go back to their San Francisco Ballet offices Friday evening on March 6, 2020, as the long-awaited premiere of the company’s A Midsummer Night’s Dream was about to unfold before a capacity audience, but there they were, dealing with something unprecedented and astonishing. And so early next morning, they sent an urgent email, quoting the landlord SF War Memorial & Performing Arts Center:

“By order of Mayor London N. Breed, to prevent the spread of COVID-19, all public performances, events, and gatherings at the San Francisco War Memorial & Performing Arts Center are hereby canceled from Saturday, 3/7/20, through Friday, 3/20/20.”

“Therefore, it is with deep regret that we inform you ...”

And so, the first city in the country closed its performance venues overnight, SF Ballet the first to shut down. And I, along with 3,000 other ticketholders for the matinee on Saturday, found the War Memorial locked.

Announcement of the shutdown was “from Saturday, March 7 through Sunday, March 15.” As we all know, the week turned into two, then into a month, many months, and still counting.

Through it all, SF Ballet fought the pandemic shutdown valiantly, keeping the dancers in condition and later rehearsing them via Zoom, getting through the potentially catastrophic loss of a major income source when the month-long Nutcracker run could only be streamed instead of filling the War Memorial.

In 2021, the SF Ballet headquarters on Franklin Street is nothing like the beehive of activity that it had been since 1984 when it opened as the country’s first building designed and constructed exclusively for the use of a major ballet company.

The majority of staff is working remotely, but for the dancers there is some return “home,” with in-person, podded classes and rehearsals since September, and those who use the building regularly are tested for COVID-19 three times a week. Missing especially: the excited, happy sound of children and parents filling the lobby on their way in or out of Ballet School classes.

And now, besides the announcement of the 2022 retirement of Artistic Director Helgi Tomasson, 78, after nearly four decades of service, SF Ballet is making news with its digital season-opening gala and benefit, “Leap Into the New Year,” and the announcement of a bold new series of streamed premiere performances. The gala, whose $1,500 top tickets included a “virtual dinner” — catered and Zoomed — sold out quickly to the company’s devoted supporters.

The gala and the new series intersected with Danielle Rowe’s Wooden Dimes, a preview of which is shown as part of the gala and the whole work is in the March 4–24 program. the work is described as:

Safely created in the studio in careful adherence to public health guidelines, Wooden Dimes showcases exactly how choreographer Danielle Rowe has adapted her artistic vision to new mediums, in this case, film. Translating her vision from stage to screen presents both a new way to connect with audiences, but also new challenges, as staging and capturing the movements adds another layer of complexity.

Film has a special ability to create a deep feeling of intimacy between the dancers and the audience through its closeness and different perspective. While we long to return to live performances in the War Memorial Opera House and the delight these communal experiences provide, we are thrilled to be able to continue to create and share with you from a safe distance.”

The streamed digital season opens with the reprise of George Balanchine’s A Midsummer Night’s Dream (Jan. 21 – Feb. 10), followed by two mixed bills (Feb. 11 – March 3; March 4 – 24), then Balanchine’s Jewels (April 1–21), the third mixed bill (April 22 – May 12), two grand story ballets closing the season: Tomasson’s Romeo & Juliet (May 6–26) and the Tomasson-Petipa Swan Lake (May 20 – June 9). “I yearn for the days when we can all be together in the Opera House,” said Tomasson, “but until then, I hope people will find themselves with SF Ballet from wherever they are in 2021.”

There are two different purchase options for tickets to the digital season. The all-access package, for $289, includes all seven productions, bonus content, discounts, extended access to productions. Tickets for single productions is $29 and allow 72-hour stream access. Single tickets will be on sale beginning at noon today. Click on the individual program links here to get more information.

It’s one thing to stream video of a past performance, quite another to create and perform a new work during the pandemic, so the presence of a premiere on every mixed bill is an impressive accomplishment. 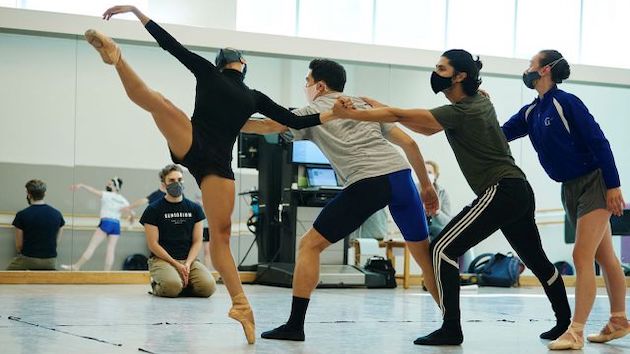 Another 2018 Unbound Festival presentation, the David Dawson-Ezio Bosso Anima Animus and Tomasson’s 7 for Eight to Bach’s music are the archived works on the April-May mixed bill; the new work is Cathy Marson’s Mrs. Robinson to Terry Davies’s music.

The company’s virtual gala offers fresh reminders of its ongoing strengths and tantalizing glimpses of great things to come.

The company’s artistic director shares his ideas for coping with uncertainty and celebrates promotions and a new addition.