At the San Francisco Ballet, the company’s promotions are usually announced in June, said Artistic Director Helgi Tomasson. But this is no ordinary time. “With all the dancers sheltering in place and trying to do the barre in the kitchen and in the living room, I decided to tell them early,” he said. “I think they were thrilled and excited.” He called them a couple of days before the April 22 public announcement, “and they were just, ‘Wow.’”

It was a nice surprise, a balm in the wake of other, less pleasant ones. “I miss not seeing them,” Tomasson said. “I’ve spoken to all of them, and they seem to be doing very well. Dancers are disciplined people, and they’re dealing with this in a very disciplined way.” But their careers are “so short,’’ he added by phone from his home in Napa Valley, where he and his wife, Marlene, are sheltering in place, “and there’s nothing we can do.” 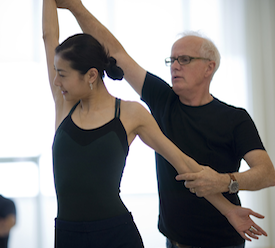 Health concerns are major in any business during this pandemic, but even more so in the ballet business, which is all about physicality. What the dancers and the company will be able to do remains an open question, but one Tomasson and his colleagues have been carefully considering against the day when the City of San Francisco weighs in — hopefully, he said, in the not too distant future.

Tomasson envisions bringing in dancers in small groups for company class, a daily event when the company of 72 dancers is at work. Long lines at the barre obviously won’t be happening. “We have five practice rooms. Maybe we could have five classes of eight or 10 people,” he said, and they could go first into their dressing rooms, then into a room to stretch — essential before class — and then into another studio, with time for cleaning the rooms in between the arrival of each group. “Maybe the doctors would say, ‘do it otherwise,’” he mused. “I have to wait until the city tells me I can do this.”

Tomasson hopes to be able to meet with Mayor London Breed and her staff in a couple of weeks to lay out his plan. Whatever comes next, he said, it’s still going to be hard for dancers, “used to the big studio, moving across the floor, jumping, spinning ... not yet.” Then too there are partnering issues, “supporting and lifting the ladies. Can you do that with masks? Whatever they throw at us, we will be ready, be flexible.”

The shutdown was brutally swift. The last offering of the company’s spring season was George Balanchine’s A Midsummer Night’s Dream, which opened and closed on the same night. That was it. No 25th-anniversary celebration for star ballerina Yuan Yuan Tan. No company premiere of Aleksei Ratmansky’s The Seasons. And no world premiere of Cathy Marston’s Mrs. Robinson. Choreographer Marston was in town, rehearsing the cast. Then she had to rush home to her family in Switzerland. “We got her out on the last flight.” All those ballets will be among those scheduled for the 2021 season, said Tomasson, plus something festive, if a bit late, for Yuan Yuan Tan’s milestone.

As for The Nutcracker, that cherished staple and moneymaker of the holiday season, stay tuned. “It’s May, way too early to make any decisions,” Tomasson said. “Maybe in the fall.” Whether anything else will change at the opera house, in terms of seating arrangements or ticketing or even dining, will largely depend on the city. The good thing, though, is that the company has Nutcracker in its bones, and, given the go-ahead, can move very quickly to get it onstage.

The dancers, an international array, are mostly in the city, awaiting their futures. To their ranks, six apprentices have been added for 2021. Two soloists have been elevated to principal as of July 1: Korea-born Wona Park (“a wonderful dancer, beautifully musical”) and native son Max Cauthorn (“He’s been in big roles. He did Etudes very well, and he had the lead in Frankenstein”). Both trained at the San Francisco Ballet School. Four corps dancers, Ellen Rose Hummel, Diego Cruz, Lucas Erni, and Myles Thatcher, are now soloists, joining the ballet school’s alumni who make up 65 percent of the company.

Yet to join them is new principal dancer Nikisha Fogo, whose contract with the Vienna State Ballet, where she’s in the top rank as first soloist, ends in June. Fogo, of Swedish and Jamaican descent, auditioned for Tomasson last year when the company was in London. “I knew immediately that she would be a very good fit,” said Tomasson, who praised her “strong and versatile technique and beautiful musicality.”

The company roster is full now, although with principal dancer Carlo di Lanno leaving to return to Europe, there might be space for “a tall male dancer who’s very well suited to the repertory.” While the company waits in place, then, there remains room to look ahead.

The company’s artistic director is keeping with the times.

The Lives of Women: A Matter of Degree

Choregrapher Cathy Marston’s Mrs. Robinson is a new take on The Graduate.