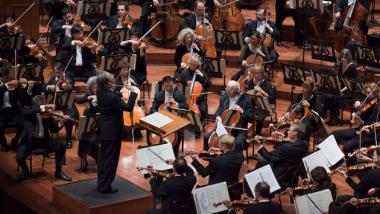 The concert, titled Symphony Relief, raised more than $75,000 for the North Bay Fire Relief Fund and the Sonoma County Resilience Fund. According to SFS sources, “San Francisco Symphony patrons and concert attendees were also encouraged to make donations directly to these organizations in order to maximize the impact of this event.”

The North Bay Fire Relief Fund was established by the RCU Community Fund, in partnership with Redwood Credit Union, Senator Mike McGuire, and The Press Democrat, to assist those impacted by the wildfires that have ravaged the North San Francisco Bay Area. To date, the North Bay Fire Relief Fund has raised more than $16 million, with 100% of donations going directly to victims of the fires.

A program of the Community Foundation Sonoma County, the Sonoma County Resilience Fund was created in October, 2017 to address the mid to long-term needs of Sonoma County as it recovers and rebuilds from the devastating fires. As funders with 34 years of experience in grantmaking in Sonoma County, the Community Foundation will convene local nonprofit partners to work with people impacted by the fire, collaborate with a diverse range of leaders and agencies that support the community, and conduct a strong due diligence process to effectively support those who have the most need.