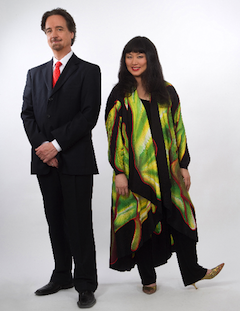 At long last and out of the blue, in 2003 good summer music came to the Peninsula with [email protected]. Well, not quite "at long last." There was the first-rate Stanford Summer Music Festival from 1964 until 1970 when Stanford University pulled the plug. But unrelated to the university, here came this private festival directed by pianist Wu Han and her husband, cellist David Finckel.

It was really something new here, like a "Music at Marlboro West," for the first few years tucked into small but attractive venues, the Menlo School, Stent Family Hall, Martin Family Hall, and Palo Alto's St. Mark's Church, later expanded to the new, spacious, and splendid Menlo-Atherton Performing Arts Center.

This season's Festival theme is "From Bach." Directed by Gloria Chien and Gilbert Kalish, there's the Chamber Music Institute, music students, ages 9 to 29, from the United States and abroad who come to Menlo for the teaching and coaching. Institute participants play the 5:30 p.m. Prelude Performances, chamber music programs that are open free along with the coaching sessions. There are five "Carte Blanche" solo recitals (two are not in the morning) in this year's season, July 18-August 10 and central and most importantly, the eight programs spread over 13 evenings.

Among performers and teachers are 45 artists who, besides Han and Finckel, include pianists Jeffrey Kahane and Kalish; violinists Jorja Fleezanis, Ian Swensen, and Joseph Swensen; violist Paul Neubauer; cellists Carter Brey and Colin Carr; the Danish and Orion String Quartets.

It's a rich, irresistible menu, but with the high overhead, despite generous donor support, ticket prices are dear. Worth the trip, worth the price.