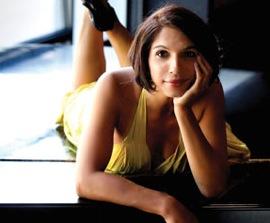 About Time to Hear Some Duke Ellington

“Make history live,” runs the cliche. “Easier said than done,” reply the rest of us.

It’s a rare treat to encounter a concert so well-thought-out that it evokes a time and place in the past and also draws immediate connections to our own lives. The audience at Lara Downes’ Duke Ellington–inspired concert, “Long Time Coming,” at the Mondavi Center April 9 and 10, may end up feeling as transported by the images and thoughts the event inspires as by the artist’s piano playing.

Downes’ starting point is Ellington himself. One of America’s greatest composers by any standard, he is something more than that to Downes, who is steeped in the history of the Harlem Renaissance, both by accident of birth and by study.

“I see him most as a figure who was able to effect tremendous change without looking like he was trying very hard. He was a statesman without being obvious about it — and he was criticized during his lifetime for that. But, when you look at the way he presented jazz, and presented himself and the music of a people and a culture, that was a tremendous gift.

“Working with the Brubeck Institute [Jazz Quintet, which plays in the concert], we were talking a lot about cultural ambassadorship, which is something, unfortunately, that isn’t actively promoted right now. But it was so important in the mid-20th century, and was important to Dave Brubeck himself. [Ellington] had a tremendous impact abroad, but he also had a huge effect at home. So much of how we look at jazz and African-American culture now comes from [that ambassadorship].”

Ellington is also bound up with Downes’ musicianship in a more personal way. “The two first pieces that I remember as a child were Ellington’s Sacred Concerts — my parents used to listen to them — and Glenn Gould’s recording (the early one) of the Goldberg Variations. So I feel that this project is taking me back to my whole trajectory.

The music on Downes’ concert takes off from Ellington’s seminal piano concerto, New World A-Comin’. That piece has a story connected with it that Downes wants to elucidate.

“Ellington’s piece was inspired by a book by Roi Ottley called New World A-Coming: The American Negro – His History and Literature [1943]. Ottley was an African-American writer and journalist, part of the Harlem Renaissance in the 1920s–’40s, and one of the first African-American overseas correspondents. His book was sort of an extended essay on the changes that would be coming as a result of the end of World War II and the end of colonialism, a whole new era of racial equality, not just here but across the globe.

“As a segue to that, he had a radio show in Harlem for several years during the war, with the same title. And it was a weekly show where he would interview African-American celebrities and regular folk, telling stories. It was one of the first mass media efforts to bring that experience to the general consciousness. And Ellington wrote the theme music for the radio show. So I listened to some of the radio shows, which are just like a time capsule of the period, and I became very interested in integrating different aspects of spoken word into this piece.”

To that end, Downes commissioned composer David Sanford to write a companion piece to Ellington’s concerto, calling it Long Time Coming, which weaves segments of Ottley’s radio show into the fabric of the music. And to draw the larger connections between then and now, “I wanted to find a spoken-word piece that would represent today in not too-specific a way. The piece, in my mind, is also about tomorrow — past, present, and future. And when I came to the poetry of [former U.S. Poet Laureate] Rita Dove — you know, she’s a musician as well and she just loved this project as well, and her piece is so beautiful and appropriate. So everything just came together.”

There’s so much on the table in this concert, so much creativity on display, that your thoughts begin to race even before you reach the concert hall. Which is how it should be.