Preparing for the world premiere of a percussion concerto about the end of life as we know it has been as challenging as you’d expect for the designated composer and soloist.

“I don’t think I’ve ever been this stressful before in my life,” confesses 39-year-old Adam Schoenberg from his Los Angeles family home, where he completed Losing Earth for the San Francisco Symphony. “I was going up for tenure [at Occidental College], writing incidental music for my wife’s play [Las Mujeres del Mar (The Women of the Sea), by Janine Salinas Schoenberg], and finishing up the concerto. And everything was due in early September!”

Reached a few days earlier, San Francisco Symphony principal percussionist Jacob Nissly was busy assembling a brand-new instrument, dubbed a “Frankenstein marching set,” which will also debut with the concerto. “It’s a hybrid, a snare drum with a high-pitched Kevlar head and some other stuff attached to it,” he explains. “I’ll do some improvisation on this, but I’ve also been working on this concerto for months, memorizing it.”

The hard-won rewards of the reunion of these two former Juilliard schoolmates will be shared with the public at Davies Hall in performances Oct. 17–19, and will showcase some acoustic and kinetic surprises they don’t want to spoil for readers ahead of time.

“The idea for the piece was to explore the peaks and valleys — the super-fast and the super-loud and the super-soft and super-slow — and bring to the forefront the versatility that I personally have on these instruments, and show that what we percussionists do isn’t just play the triangle in the back,” Nissly sums up.

As for the thematic inspiration, it came to Schoenberg on his smartphone, in a piece from the The New York Times Magazine, sent to him by an Occidental colleague. He read it on a flight up to San Francisco, to confer with Nissly and witness the SFS’s performance of live accompaniment to a screening of Star Wars. “The article was called ‘Losing Earth: The Decade We Almost Stopped Climate Change,’” says the composer. “It was terrifying, about how, between 1979 and ’89, we were just a few signatures away from having some universal policy that would reduce emissions and our carbon footprint. But politics and oil and gas companies interfered, and it didn’t happen. It started to get my creative juices flowing, and it’s probably because I live in Los Angeles and have two little kids [Luca, 6, and Leo, 4], and the summers are getting longer and hotter and drier, but then suddenly we have these downpours and flooding, in the winter and spring.”

Nissly insists that “I’m not here to be political,” but he’d been quick to turn to Schoenberg when SFS administrators approached him about a commission. “They were more generous than I ever could have dreamed of,” he said. “It wasn’t just, ‘we’d like to feature you as soloist in a concerto,’ but also, ‘okay, do you know anybody who could write [it].’”

His first meetup with Schoenberg, three years his senior, had been less than promising. “My first week at Juilliard, I was playing in the New Juilliard Ensemble,” he recalls. “I was running late on the 1 train. I got to Juilliard maybe 45 minutes before the rehearsal, and that would be enough time for everyone — except the percussionist. I got almost everything set up and was looking over the list of pieces. I saved the piece labeled ‘A. Schoenberg’ for last, because I figured it was Arnold Schoenberg, and I knew he didn’t write for much stuff, maybe xylophone. But then I picked it up and went, oh no, it’s a student, Adam Schoenberg, and the first instrument is oxygen tanks! Now it was 15 minutes before rehearsal, and the tanks were gigantic and suspended on a rack — I had to get three people to help me move it and we had to deconstruct the orchestra setup. I was pissed!”

After Nissly had vented his frustration, he invited his new colleague out for beer, and the pair got to spend quality time together after they coincidentally landed in Florida. “Jake introduced me to a lot of great jazz artists, and a lot of different genres,” Schoenberg recounts. “And Jake’s also quite athletic, he does a lot of running, and I’d been an athlete in college, playing soccer at Oberlin.”

“Adam is a great jazz pianist, he’s got amazing ideas,” Nissly discovered. “But then, any good composer should be doing that, riffing ideas. And there’s the whole jazz part of being comfortable improvising, which I don’t think that a whole lot of my classical peers are.”

Once the soloist had chosen his composer for commissioning, the collaborative process began promptly, informed by their early experience with the oxygen tanks. “It was, ‘Remember, Adam, don’t write for every instrument that you know exists,’” Nissly chuckles. “And I had to help with the notation, showing him what looks the most user-friendly.”

“There isn’t any standard mechanism for notating [percussion],” adds Schoenberg. “There is, for pitched percussion like vibraphone and marimba, because you have to write it on a staff. But when it comes to the skins and the metals and the woods, you sort of have to create a table of contents.” Unlike most orchestral players, even those who double, “Jake is cycling through a lot of different instruments,” including, in this concerto, a variety of drums, temple blocks, tambourine, Thai gong, and Afro-Latin djembe and cajon, all of which must be represented by some sort of symbol on the score, alongside the standard pitched percussion he’ll also play.

“As composers, it’s our job to study all the instruments, so theoretically we understand what their range is, what’s idiomatic and what’s not, and of course where we can push that envelope,” Schoenberg points out. “But because I just play the piano, I don’t know these instruments intimately, I don’t know what’s going to be really hard for someone. So Jake and I have done much of this collaboration through texting, believe it or not. I have a violin concerto [Orchard in Fog, 2018] which Anne Akiko Meyers is taking on tour now, and that became a collaboration — but only after I wrote the piece.”

Losing Earth has not only been a singular experience for the composer, but it’s also unique within the sparse genre of percussion concerti, says Nissly, since many of those works have been “very dense, very difficult, let’s put every instrument we have on stage and play each one for ten seconds. Instead of, why don’t we have just a few different stations, where we can develop some ideas, and get people acclimated.” Nissly’s effort at Davies will be reinforced by six other percussionists, with Cristian Măcelaru guesting on the podium.

Schoenberg lays out his vision and compositional structure in the concerto’s program notes:

The piece begins with a march that is meant to represent the mundane existence of our day-to-day ... But as the march progresses ... rhythmic breaks represent the natural occurrences and/or disasters that are affecting our cities and towns ... We enter the second section of the piece, which represents the inevitable loss of our beloved coastline ... The vibraphone sets up a slow, oscillating world that is meant to reflect a sense of being underwater. This is a very atmospheric and dreamy section, featuring multiple string divisi and gentle winds and brass.

As the second section comes to an end, a dark texture slowly emerges, and helps transition us to the third and final section of the concerto ... the Scherzo ... which is super-fast, featuring highly virtuosic mallet writing, with simultaneous kick-drum, temple blocks, granite blocks, and other wood and metal ... A somewhat pop-oriented chord progression and groove emerge, and we momentarily return to the opening of the piece, creating a cyclical timeline that mimics the different stages of our lives, and that of the earth.

Nissly notes that, “The idiom of the percussion concerto hasn’t been written as much as our counterparts in the string family, or the piano, or even any of the brass and wind instruments. It’s a latecomer as a solo voice. The first two well-known [percussion] concerti were by Darius Milhaud [1929], which I did on [the SFS] Soundbox, in 2016, and the Paul Creston Concertino for Marimba [1940].”

What Schoenberg brings to this canon, assures Nissly, “is very tuneful, stuff you’d remember,” though it will also “pay homage to my time in marching drum corps.” All sections of the orchestra have a place in the score, and Nissly supposes his rare positioning as featured soloist throughout a 23-minute piece may allow players and audience “to see percussion in a different light than just a 100 percent supporting role. Occasionally I get the eye-rolls from the string players, so maybe this will help.”

Schoenberg, who’ll be there in the audience, is looking forward not only to the premiere of Losing Earth but also to the pieces it will share the evenings with: Lily Boulanger’s D’un matin de printemps and Maurice Ravel’s orchestration of Modest Mussorgsky’s Pictures at an Exhibition, coincidentally the inspiration for Schoenberg’s Grammy-nominated Picture Studies (2012).

You won’t see Nissly in his familiar spot at the back of the ensemble for those other two pieces, though. “I’ll be sweating my face off by the end of that concerto, every night,” he says, “so I don’t think I want to have to change out of my tux and go play Pictures. I’ll take that time off.” 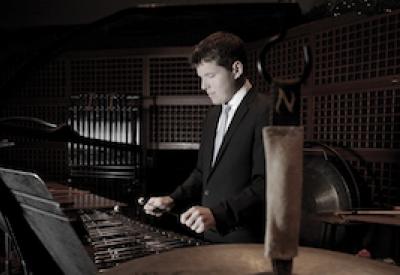 S.F. Symphony musicians Scott Pingel and Jacob Nissly like to swing out whenever jazz gigs beckon. They tell why.

Like overgrown kids playing in a sandbox, this percussion ensemble played a concert of new music that lifted spirits and attracted some young fans.