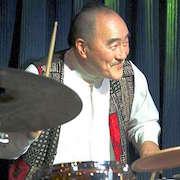 I went to the 7 Mile House a year ago to see Akira Tana with Friends from Osaka, partly because I myself have been a friend of the Palo Alto-bred, Japanese-American drummer Tana and an even longer-term admirer of his jazz collaborations with the likes of Dizzy Gillespie, Lena Horne, James Moody, and Cedar Walton. I had reason to trust Tana’s taste.

But I was not prepared to be blown away by Tana’s newly acquired colleagues from Japan’s second-largest city, to the point where I’d forget their foreign novelty and just groove on the dazzle of Atsuko Hashimoto’s flights across her Hammond B-3 organ, flanked by her husband Yutaka Hashimoto on guitar and by saxophonist Hideki Kawamura, underscored by the dynamic Tana. It’s all understood in the universal language, when it’s sounded out so strongly and joyously

The Osakajin are back for what turns out to be their third annual visit, and hopefully not their last. They’ve already presented their standard set of jazz standards and blues at Lakeport and at San Francisco’s Black Cat and will continue their tour with Tana at the Jazz Chez Hanny salon, the Sacramento Jazz Coop (with vocalist Nicholas Bearde), the 7 Mile House (on July 9), Savanna Jazz, house parties in Redwood City and La Honda, and Piedmont Piano (again with Bearde). They started this stint on June 28 at Stanford, with Jackie Ryan singing an evening of the music of film composer Michel Legrand, who passed at the beginning of this year.

“Atsuko memorized all of the charts, which were arranged by Larry Dunlap,” raved Tana over our lunch with organist Hashimoto, a couple of days later. “That kind of dedication is hard to find anywhere. And when we rehearsed with Jackie, one of the first comments she made about meeting Atsuko and Yutaka was, they play so incredibly well, there’s no diva factor, no attitude, no ego. It’s all about the music. I did a tour with Michel Legrand and his trio in the ’90s in Brazil, and I got that same impression.”

Hashimoto started on organ at age 4, playing American jazz and pop and proceeding to classical keyboard training. Throughout her early years, her hometown of Osaka was developing a reputation for organ, as the site of the YS Corporation, a Hammond B-3 distributor, founded there in 1986 by Osamu Yamamoto. The young Atsuko was hired to help promote sales by demonstrating her facility on the instrument, and with several other talented local organists, she began to foster something like an Osakan legend.

“I had to learn all the styles from listening to recordings of Jimmy Smith and the other American players,” says Hashimoto, speaking primarily through translation by Tana. She particularly admired and emulated Smith, “because of his passion and feelings, more than any strictly musical thing,” and got to hear him in person on his visits to Japan. She began performing herself at Japanese jazz festivals.

Hashimoto sent a demo recording of her playing to the San Jose-based Pete Fallico, founder of the non-profit Jazz Organ Fellowship, and was invited by him, in 1999, to make her first visit to the States and to perform, among other venues, at the erstwhile Jazz at Pearl’s in San Francisco, with guitarist Bruce Forman and drummer Vince Lateano (who now co-hosts the Sunday Doghouse Jam at the 7 Mile House). Over the next several years, she musically hosted several American jazz luminaries on their tours to Japan and returned to the States, at Fallico’s invitation, to play the San Jose Jazz Festival. She recorded several albums with guitarist Jeff Hamilton, including one (Introducing Atsuko Hashimoto, on the Azica label in 2008) with tenor saxophonist Houston Person.

Tana heard both Hashimotos with Kawamura at one of their San Jose Jazz Festival gigs and committed to a collaboration. “It gives me a cultural connection to where my parents came from,” he points out, “but it’s in a musical way, and it’s an American connection.” Tana has himself held master classes in Japan at the behest of Osaka’s Yamamoto, whom he calls “the Pete Fallico of Osaka,” and he’s gigged with several other Japanese women organists. “My impression,” he shares, “is that their lines are very much bebop-oriented, single lines, as opposed to traditional [more florid] organ playing.” Tana, who has taught jazz at San Francisco State University, has also written a thesis about jazz in Japan.

“In general, Japanese culture has a respect for art and music, and not just jazz, from foreign influences all over the world,” says Hashimoto. For many years, the only medium in which fans could find certain rare and/or progressive jazz recordings was as Japanese rereleases. In the States, still, “jazz is almost an afterthought,” adds Tana. “That’s why Americans [i.e., jazz musicians] moved to Europe in the ’60s. Now, there’s a lot of clubs in the Osaka region, and some of them have their own Hammond B-3's. People, including businessmen, like to go out and drink there, after business hours. But the clubs don’t pay any money.”

Thankfully, a few, but not all, American clubs guarantee artists a payment. Recently, the 7 Mile House has set that fee at the minimum level established by the Jazz in the Neighborhood advocacy organization. But at some Japanese clubs, “artist have to pay the club in advance, up to $500, to play,” Hashimoto points out. “So if you bring your audience in, you might be able to break even.”

She laments that there’s “not too much” jazz radio in her native country, and appreciates the Bay Area’s 24-hour showcasing of the genre over KCSM-FM. “Also, I like playing here in America more than in Japan, because in Japan [she mimes an immobile audience member], they’re too quiet.” “If you feel good about what you’re playing and people appreciate that, you’re going to play differently,” laughs Tana. “In Japan, everybody is so reserved, it’s hard to tell how they really feel about the music.”

The organist herself visibly embodies her enthusiasm about her music-making, particularly with the blues. “It goes through my body and up to my brain,” she says, “where my outlook transforms itself.” Achieving this with her guitarist husband of 30 years makes it even better. “He is pure,” she says of Yutaka, “and how he feels about the music is very clear and honest.”

Although Tana has served his Japanese friends as an appreciated booker, promoter, and translator, as well as a world-class drummer, he notes that, “they’re not really concerned about making money, because they feel like they’re coming over here on vacation, to get out of the summer heat and humidity of Osaka.” His spouse, Marjorie, steps in to guide the visitors on what Hashimoto says is her other favorite vacation activity: “going shopping!”

The annual event, which celebrates the diversity of the Bay Area musical community, examines Asian-American jazz for this year’s “Field Report.”

From Baroque classics to new compositions, electronica, and jazz, SF Music Day has it all.