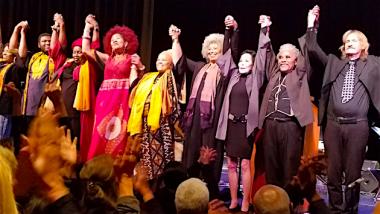 Anthony Brown — drummer, composer, and educator — has been a proponent of jazz as a vehicle of political consciousness over the past four decades. But he was pleasantly surprised when he noticed, while delivering a guest lecture in the department of music of the University of California Santa Cruz, that his audience included professor Angela Davis and her Marxism class.

This meetup helped spark Down by the Riverside, a production involving Brown’s all-star, eclectic, and virtuosic Asian American Orchestra, his Voices of a Dream vocal ensemble, his composition, and spoken words written and delivered by Davis. The work received its world premiere last Saturday at Fort Mason’s Cowell Theater, showcasing the theme of this year’s San Francisco International Arts Festival, which commemorates the human rights advocacy of Dr. Martin Luther King, Jr., and the 50th anniversary of his assassination.

The evening’s program opened with two, shorter Brown creations. He based “Ichikotsu-cho,” the first section of E.O.9066 (named for the Roosevelt executive order providing for the incarceration of Japanese-Americans during World War II) on ancient Japanese court music, which Brown pre-announced as the world’s oldest form of classical music. Gentle, lovely, and unmetered, the piece was initiated by the Orchestra’s koto player, Shoko Hikage, bass player Mark Izu doubling on sheng (a Chinese mouth-blown reed instrument), and Masaru Koga on soprano sax. Brown himself deployed a tom-tom drum pedaled to allow for variable pitch.

The evening’s second piece, Go for Broke!, also marked the 75th anniversary of the signing of E.O. 9066 and, according to the program notes, “honor(ed) the courageous Nisei (second generation Japanese in America) soldiers who fought and died for their country while their families were imprisoned.” (Brown is himself ethnically Japanese American, African American, and Native American.) A softer drumming from the odaiko (with cushioned mallets) and a gong initiated “Call to Duty,” the first of eight sections, and the military theme was hauntingly announced by two echoing trumpets, Carey on stage and Mario Guarneri at the rear of the auditorium.

The folksy “Rabbit in the Moon” involved a caressing koto solo, with Hikage also vocalizing the Japanese lyrics. Koga provided airy accompaniment on shakuhachi flute. For “Testimony,” former San Francisco poet laureate Janice Mirikitani took the stage to deliver the first of several of her poems, this one referring both to the compromised pride of interned Japanese families like her own (she’d lived in the prison camps as a child) and to the horrors of Hiroshima.

During “Battlefield,” there was occasional disparity of timing between the Japanese percussion at stage left and the horns at stage right, most likely due to the challenges of monitoring. Nevertheless, this section provided a particularly fine showcase of the singular instrumental variety of the Orchestra and of Brown’s conceptual sequencing. In the “Go For Broke!” section, the athletic approach and resulting volume of the odaiko and shime daiko duet reached a heart-stopping level, with shouts from the players and appreciative applause from the audience.

Mirikitani’s poem for “Breaking Silence,” read in fragrant, loving tones, was dedicated to her mother, who’d assured her daughter that “our language is beautiful” and that it was vital to “kill … the silence.” For the “Last Post” section, Carey and Guarneri returned to their touching trumpet echoing, the satisfying musical and dramatic conclusion readying the house for intermission. “I think Anthony Brown is a genius,” Mirikitani exclaimed as she joined the crowd in the lobby. “I wish I could carry him around with me to all of my readings.”

The six-member Voices of a Dream ensemble, arrayed in radiant African clothing, joined the Orchestra on stage for Down by the Riverside, whose title referenced the church site of a memorable speech by Martin Luther King, a year before his death. Accompanied by simple stick-pounding percussion, the vocal ensemble sang Brown’s arrangement of the spiritual “Wade in the Water.” Even though their intonation was not always clearly on-pitch, and the arrangements were occasionally artsy (along the lines of Sweet Honey in the Rock), their high spirits were infectious throughout the piece. The gospel favorite “Precious Lord” followed, and a soulful jazz vamp by the Orchestra augured the entrance of Angela Davis, received by applause.

Davis delivered what, without the singers and instrumentalists, would have been a lecture in the form of a rousing call to action, name-checking such civil rights activists as King and June Jordan, as well as recent victims of race-biased brutality, including Trayvon Martin and Sarah Bland, as well as Emmett Till, lynched in Mississippi in 1955. Her text served to commemorate King’s legacy, and though it might be said she was preaching to the choir, her vibrant, lilting alto voice made the messages more than just reminders.

And Davis’s insight in collaborating with Brown was certified by the musical conveyance he provided her, ranging from a koto and shakuhachi duet to a thrumming bass solo to the taiko underpinning of her quotation of King’s lament about “the appalling silence of the good people.” Amikaeyla Gaston, director of the Voices of a Dream, offered “Strange Fruit,” made famous by Billie Holiday, as an a cappella solo, in a crystalline, compelling soprano. The evening ended on a high and memorable note with the ensemble’s rousing “Down by the Riverside,” followed by “Lift Every Voice,” for which the audience had been provided participatory printed lyrics.

Omar Sosa in the Flow With Transparent Water

The commanding pianist is paring things down at Yoshi’s, with a trio that includes Senegalese kora player Seckou Keita and Venezuelan percussionist Gustavo Ovalles.