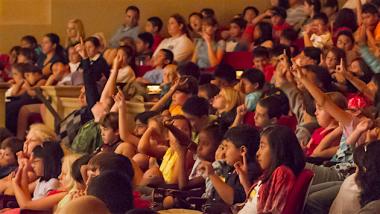 ArtSPARK Takes Kids to the Symphony

“This is a valley,” says Andrew Bales, president and executive director of Symphony Silicon Valley, “built by people heavily invested in ‘STEM.’” He’s referring to the acronym for school curricula based in science, technology, engineering, and math, the logical prerequisites for careers in the lucrative computer-based enterprises abounding in Santa Clara County and the surrounding region.

“We’d rather go with ‘STEAM,’” Bales continues, “but the companies that support our school programs leave the ‘A’ — the arts and creativity — out.” In 2011, Bales founded the ArtSPARK program in an attempt to secure that fifth letter, targeting the underserved portion of the County’s demographic, primarily minorities from low-income homes.

On March 19 and 20, ArtSPARK will bus some 4,500 fourth graders, teachers, and parent chaperones to the California Theatre in downtown San José, where Maestro Peter Jaffe and members of the Symphony Silicon Valley will lead them in a program titled “It’s About Time: Music, Math & More.”

“In fourth grade math, one of the elements is fractions,” notes Bales, who comes from a family of teachers and previously served as executive director of the San Jose Ballet. “Time signatures are another form of fraction,” he continues, “so Peter, who’s the creator of this program, starts it off with music in 2/4 time,” in the form of a Strauss polka. He goes on to a Bizet gypsy dance in 3/4, a Prokofiev procession in 4/4, and a Tchaikovsky tarantella in 6/8. “And he gets the kids to understand, with clapping and other things, what the rhythm feature of this is. He takes it out to 5/4 — the Mission Impossible theme — and 7/4 time with a Dave Brubeck jazz rhythm [‘Unsquare Dance’].”

Prior to the creation of ArtSPARK, Bales and like-minded local arts presenters had extended a wider outreach, also linking third-grade drama programs to San Jose Rep and fifth-grade dance to the San José Ballet, until those two companies collapsed, leaving the Symphony and the fourth graders, who recruited mariachi groups and San José Taiko for additional exposure to world music. “By the second year, with full funding, we reached 60 percent of every third and fourth grader in Santa Clara County, and 40 percent of all the fifth graders,” Bales reflects. “It was a half-million-dollar program, which required our getting substantial outside funding, which we were getting at that time.

“And so, we got huge positive-response rates from everybody, as one of the strongest programs of its kind in our region,” and as “a gift to the schools that gives them opportunities to fulfill their mandate to teach the arts, while not burdening them with background material they can’t handle.” In addition to bus transportation, ArtSPARK provides teachers with vetted curriculum-based materials and referrals to web-based and other resources. “One of the reason the arts are poorly taught in California schools,” Bales points out, “is that though it’s one of a plethora of core curriculum subjects, it’s the one which teachers are not required to have any background in for their credentials.” But by the second year of their involvement in ArtSPARK, “teachers in surveys said that they left the program knowing what they could do to get their kids better [developed in the arts]. We give them materials to share over a broader portion of the year, and the fact that they know they’re coming back next year means it’s worth their time.”

As for the kids themselves, “when they walk in the door of the California Theatre [renovated to its 1927 glory], they’re already saying, this is a place that doesn’t look like my school. You sit them down, put them into a professional environment, and show them what we do in that context, and show it to them at a high standard. And they say, this is an event that I should take seriously. You have any number of the youth orchestras in the area which have students whose first [musical] interaction was in one of our programs.”

And for the participating musicians, “they’re happy to take the work, because they have relatively limited revenue opportunities during school hours. One of the critiques we got from funders was that the cost per kid got pretty expensive. Yes, because we pay everybody to do this, we don’t ask them to do it for free. But the outcome is of a standard that merits that investment.”

How 24,000 Students Leave Their Hearts in San Francisco

The S.F. Symphony’s Adventures in Music program reaches every child in grades 1-5 in the San Francisco Unified School District with music appreciation, inspiring them and building community.

No Nutcracker Without the Kids: Behind the Scenes at Oakland Ballet