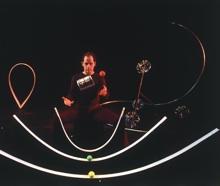 California Symphony: Moving Ahead With the Times

Jason Victor Serinus on September 21, 2009
Beyond the splendor of the big city’s symphony, the extraordinarily progressive California Symphony is often relegated to “over there” status. But ensconced in Walnut Creek’s Dean Lesher Center for the Arts, where it performs four concerts per year, Barry Jekowsky’s gem of an orchestra continues to break new ground.

Take the Symphony’s forthcoming concert, “Music in Motion.” The programming may have its share of crowd pleasers in the form of Rossini’s William Tell Overture and Sibelius’ Symphony No. 2, but it also boasts something entirely unique. For the first time in his career as a world-renowned visual motion artist, Connecticut-based Michael Moschen will choreograph his performance art to live symphonic music.

Hearing that Moschen plans to weave his crystal balls through Ravel’s Mother Goose Suite and an excerpt from Mason Bates’ Mercury Interludes may, to some, sound like a gimmick. But Jekowsky insists that Moschen, who has received a prestigious MacArthur Fellowship and performed at Spoleto USA, the Brooklyn Academy of Music’s Next Wave Festival, Lincoln Center’s Serious Fun Festival, the 75th Annual New Yorker Magazine Festival, and the Jacob’s Pillow Dance Festival, is a true performance artist.

“Moschen has never done anything like this before,” the conductor explained in a rambling phone conversation that suggested he reserves discipline for the baton. “It’s a huge undertaking for him. But he is such an artist; he’s poetry in motion. Read his reviews!”

After Jekowsky approached Moschen, he sent him works by John Adams and Steve Reich to listen to; they weren’t a good fit for Moschen’s artistry. The two went back and forth for weeks, trying to figure out what worked best. The Ravel and Bates, which are cohesive works with short little vignettes, went to the top of the pile.

“What I’m focusing on is not business as usual,” Jekowsky declares. “As well as engaging new audiences, I’m reengaging concertgoers who may have gotten tired or bored of the symphony, or lost their way. I’m trying to hit a chord in people that will open doors and bring them to the symphony. In a multitasking era, when people carry on telephone conversations while looking at their computer screens, as we both are right now, if I can introduce a bit of that and turn the symphony orchestra into a different kind of experience, I can reach a whole younger generation of music lovers.”

The proof of Jekowsky’s gamble has been overflow audiences, with people turned away from the 800-seat Dean Lesher Center. Amidst the economic downturn, the California Symphony had its strongest ticket sales last season. Much of this is due to the West Coast premiere of Lee Johnson’s Dead Symphony: An Orchestral Tribute to the Music of the Grateful Dead (breathtakingly paired with Stravinsky’s Firebird Suite), another concert where Russian handstand acrobats Louri Safranov and Nikolai Melnikov of Cirque du Soleil performed to Barber’s Adagio for Strings, and a third that included Mussorgsky’s Pictures at an Exhibition accompanied by the 3-D world premiere of the video suite “Astronomical Pictures at an Exhibition.”

Bates, whose music Jekowsky premiered before it was championed by Marin Alsop at the Cabrillo Music Festival and Michael Tilson Thomas at the San Francisco Symphony, is slated to introduce his third world premiere with the California Symphony next May.

Most important, Bates is only one of many outstanding composers who have participated in the California Symphony’s annual Young American Composers in Residence program. Over the last decade and a half, all but one of Jekowsky’s picks has won the Rome Prize. (“The one who didn’t, won the Millennium Prize of the Philadelphia Orchestra, which is even more important,” Jekowsky quips.) Two of the composers, Pierre Jalbert and Christopher Theofanidis, have won the UK Masterprize. In short, Jekowsky’s track record for nurturing America’s finest young composers and soloists is tremendous.

All of which is to say, there’s brilliance to be found at the California Symphony. For a concert whose bottom line is motion, those in the know will be heading to Walnut Creek in October.