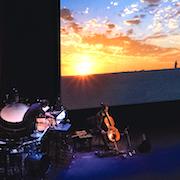 Musical works inspired by natural phenomena have probably existed since the first cave person whistled in response to a bird’s call. The Colorado, a narrated film with live music coming to the Bing Concert Hall at Stanford April 21 and 22, is part of a tradition that includes Romantic symphonic poems and Philip Glass's Koyaannisqatsi.

Composer Paola Prestini, whose company VisionIntoArt is the engine behind the project, and whose music joins that of several other composers, says the performance will offer many points of entry for audiences. “For some people, it’s going to be the music, for some it’s going to be this really rich, historic, and conservationist angle. Hopefully anyone can find their way into the project and take away a deeper understanding than they arrived with, and also have a beautiful experience.” With this event, Bay Area audiences would appear to have a unique opportunity to connect with a natural wonder in a truly new way in a work that appears to be as grand as it is hard to define — not unlike its subject, the Colorado River.

Prestini’s aspiration for the project is shared by filmmaker Murat Eyuboglu, who drew his inspiration from a visit to the Salton Sea, in California’s Coachella and Imperial Valleys. The Salton Sea is a poignant contemporary example of environmental destruction, and is now a major source of air pollution as a direct result of water mismanagement. His film also exists as a documentary.

Prestini’s music is joined by pieces by John Luther Adams, William Brittelle, and Shara Nova, a boundary blurring artist who embodies the ideals of working at this kind of creative frontier. Included in this group is also percussionist/composer Glenn Kotche, best known as the drummer of the rock band Wilco, but a noted composer in his own right. Their music will be performed by Grammy award winning, eight-member vocal ensemble Roomful of Teeth, and cellist Jeffrey Zeigler, a former member of Kronos Quartet, who is now a soloist and an innovative collaborator himself. Glenn Kotche will also perform.

The ten segments of the work bring the audience along on the epic history of the Colorado River, which has carved the Grand Canyon over millennia. From the giant condor that soars above it to the river otter that swims in its waters, its ecosystem has inspired artists, thinkers, and naturalists, not to mention humanity as the primordial Little Engine That Could story.

Putting all this together required some innovation. “There are so many stories to tell, but one challenge that comes to mind is in regard to the improvisations that Glenn [Kotche] and I play between each composition,” explained cellist Zeigler. “Typically, in a film, the music comes last and is set to the film. However, in our case the footage that had been shot was edited to match the musical performance. It had been decided very early on that the music played underneath the text [spoken by Mark Rylance] would be improvisations played between myself and Glenn. The recording went smoothly and we were all very happy with how the music matched the text. But one detail that we hadn’t thought through was that once the improvisations were set to the film, how we would recreate the music live? Murat [Eyuboglu] is very musical so much of the detail that we played matched certain subtleties in the film. I literally had to go back and write down what I played on the recording.”

The piece’s narrator, Mark Rylance, may be most known to American audiences for his Oscar-winning performance in Steven Spielberg’s Bridge of Spies — or perhaps from his recent turn as Thomas Cromwell in the BBC’s production of Hilary Mantel’s Wolf Hall. Rylance, who was artistic director of Shakespeare’s Globe in London for ten years, narrates a text by author and conservationist William deBuys, who has written eight acclaimed books that explore the natural world and our place within it, with particular emphasis on the American west.

Folks who listen to NPR’s Fresh Air may have the Colorado on their mind this week, as host Terry Gross interviewed David Owen, author of Where the Water Goes, which explores what he calls the convoluted legal agreements and patchwork infrastructure that govern its water usage. Indeed, it would seem The Colorado is a work for this moment in history. Brad Wells, founder and artistic director of Roomful of Teeth, explains: “It is immensely gratifying for us to be central to a project that connects us toa  remarkable community of artists, writers, and filmmakers and to collectively aim our performances at some of the most important issues of our day: namely, the environmental crisis and its impact on people most directly affected by actions at every point – literally and figuratively – upstream.”

At a time of unprecedented environmental change and destruction, when more artists and arts organizations are asking themselves how they can engage in protecting and supporting the natural world, this collaboration seems timely, and appropriately ambitious.

Joyce DiDonato Is Changing the World With Eden

A Wunderkind Comes of Age: Alma Deutscher Returns to Cinderella

The Other Martyr in Town: Philharmonia Baroque Orchestra’s Theodora