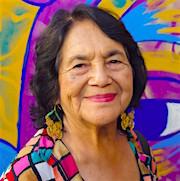 If the human body is two-thirds water, music reaching that liquid makes it flow, fluctuate, and have energy.

Or so it is according to Dolores Huerta, community activist, feminist, co-founder of the United Farm Workers, and longtime lover of jazz, opera, freedom songs, and more. Invited to create the playlist for Oakland Symphony’s Sí Se Puede: Dolores Huerta’s Playlist concert, the 88-year-old dynamo says, “Music is like an infusion, like dancing. After you finish dancing or when you hear music, you feel energized.”

Given the opportunity to showcase music she cherished while growing up and has continued to live with, Huerta says she was thrilled, but also experienced trepidation.

“I realized I’m kind of stuck in a time warp of the 1940s and ’50s. I haven’t caught up with today’s music. We get so busy doing work that we don’t take time other than to hear music at a conference or on NPR in the morning, or a Jazz at Lincoln Center broadcast on the radio.”

Huerta began her decades-long career as a community organizer in Stockton. From student activities in high school to college to classroom teaching and founding the Agricultural Workers Association, she developed a life’s mission: organizing workers and underserved communities to advocate for and achieve economic justice. Huerta is founder and president of the Dolores Huerta Foundation and she continues to travel and work to defend and preserve civil rights. Her “Sí se puede” anthem, translated to English, gained worldwide attention when it became President Barak Obama’s “Yes, we can!” slogan during the 2008 presidential campaign. Among numerous awards, Huerta received The Presidential Medal of Freedom, in 2012, the highest civilian award in the United States.

“Music has always been a part of my life,” she says. “My mother would buy us season tickets to the symphony. I love opera, but I’m so busy the opportunities to attend are rare. Anytime I can hear jazz played live, I try to take it. Sometimes I’ll hear a Latin song that came out when I was 5 years old. They’re classics, still enjoyed today. It’s popular music that didn’t go away.”

Nor will Huerta forget arriving in small towns at the end of long, 20-mile-a-day marches with farmer’s union workers. “We’d approach and they’d have a band or a bugle corps. All of a sudden, you didn’t feel tired.” A daily dose of music, she says, provides ongoing spiritual energy. “It’s a pure message. Especially for poor people, it gives them joy. It’s one thing they can have and afford that’s important to them.”

Selecting music for the playlist brought up specific memories: Singing “We Shall Overcome” translated into Spanish while standing from sunrise to dusk on farm-workers-movement picket lines; meeting Fanny Lou Hamer; and being introduced to Charlie Parker in the early 1950s when, “for the only time in my life, I was speechless.” she recalls. She also remembers meeting Fanny Lou Hamer.

“Her [Hamer's] ‘This Little Light’ — we need it now. It’s such an important moment in our history. Our light has to shine, it has to shine in this world. It gives people hope and energy to take action.” Firebird, Huerta chose for the intricacies of its — at the time — modernity. As the work’s difficult rhythms and dissonance come together, she is reminded of Earth and how, if we don’t take care of it and “if we don’t pull our different parts” into unity, we will lose the sense of the whole planet and fail to survive.

Similarly, Huerta’s invitation to Zárate infuses the concert with an essential accent she says is personal but will benefit everyone. “I saw Carmen Amaya when I was a kid. She was one of the greatest flamenco dancers and came from a farm family. Her family was dismayed she was going to be a dancer. I encouraged her to pursue what she loved and be true to herself, which was hard for a woman. We tend to please others instead of following our dreams. Of course, it was my dream to be a flamenco dancer, but if I’d done that, I never would have become an organizer.”

Or a playlist planner. So for her sacrifice of a dance career that led to a life’s work as an activist, and for the Oakland Symphony’s second annual Playlist concert featuring works selected by Huerta, we are grateful.