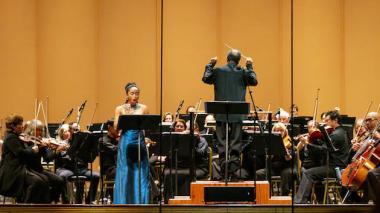 “I love this piece,” declared Oakland Symphony Music Director Michael Morgan from the Paramount Theatre podium, moments before be raised his baton for Florence Price’s Symphony No. 3.

With the spirited, propulsive and brightly colored performance that followed, the musicians clearly seemed to love it, too.

Price’s 1940 work was the centerpiece of Notes from the African Diaspora, an absorbing January 25 program of music by composers with African roots. While the pieces ranged from the conventional 18th-century classicism of Caribbean-born Joseph Bologne (1745–1799) to Duke Ellington’s fervent 1950 tone poem Harlem, every name on the bill came with a comparably fascinating backstory.

Morgan, who was in great form as both host and conductor, skillfully sketched in some too-little-known musical history in his remarks. This was in all ways an exemplary enterprise — informative without being didactic, mind- as well as ear-opening, a pleasure-filled evening of artistic advocacy. Even the program’s titular “Notes” made a double-edged point. Yes, the audience would be hearing music many had never heard — or heard of — before. But as Morgan said, even this generous program, which ran well over two hours, could only be a brief introduction, “notes” on all the underexplored treasures of classical music by black composers.

Price, whose life and career has been undergoing a rediscovery in recent years, made the biggest impression at Friday’s warmly received concert. A deeply-schooled Little Rock, Arkansas, native who went on to compose some 300 works, Price (1887–1953) suffered the double indignity of having her music undervalued because she was both black and female. She said as much in a letter to the Boston Symphony Orchestra conductor Serge Koussevitsky.

But Price persevered. Her Symphony No. 1 was the first by an African-American woman performed by a major American orchestra — the Chicago Symphony, in 1933.

The composer’s C-minor Symphony No. 3 is an assertive, eclectic work. Broadly cast in the musical grammar of her 19th-century forebears (Brahms, Dvořák, Wagner), the piece opened with a grave brass chorale that was at first brightened by the woodwinds and then gave way to an eventful stream of melodic invention, some of it flavored by spirituals and other folk material.

The second movement dawned with Coplandesque purity, with the woodwinds once again rising to the fore. The jaunty third movement, marked Juba: Allegro, fired through its infectious off-beat rhythms and ended with an amusing shrug. The thick, meaty textures of the closing Allegro thinned out dramatically to showcase individual players and tonalities throughout the ensemble. That chorale returned to bring this delightful piece full circle.

The performance was first-rate, by turns glossy, brash, wry and impassioned. Morgan elicited lyrical gushes from the strings, expressive contributions from the busy woodwinds, solemnity and fire from the brass sections, and rhythmic clarity and momentum throughout. The conductor felt the love, and made the listeners feel it, too.

The evening opened with Bologne’s three-movement Symphony No. 1. The child of a Guadalupe plantation owner and a slave mother, he acquired the title Chevalier de Saint-Georges when he was commissioned as a bodyguard to the French king (the family had moved to Paris). He was later labeled “the black Mozart” — a dubious honorific, as Morgan drolly noted, that did neither of them any favors.

Bologne’s piece was largely a curiosity. Aside from some energetic spurts and developmental turns, it toiled along in a bland, rather blunt manner. Both melodic inspiration and a leavening sense of the unexpected were in short supply. Heaven knows, there are acres of similarly indifferent 18th-century scores by white composers clogging classical radio station air time to this day. It’s only right for black composers, and others similarly neglected, to get a turn.

Soprano Shawnette Sulker was featured in the next two selections — excerpts from the opera Il Guarany by the Afro-Brazilian Antônio Carlos Gomes (1836–96) and three Songs of Separation by the estimable American William Grant Still (1895–1978).

The Gomes settings were distinctive, from spry pizzicati and an ecstatic harp to heaving string exhalations. Sulker sang forcefully and with lofty flights of coloratura. But her vibrato-heavy tone bordered on the shrill at times. Without any text and translations in the program, the audience remained largely in the dark about the content.

The Still songs, in English, fared better. Sulker summoned a mournful fire for a line about “the sound of hammers breaking stone.” As the composer moved from the mordant harmonies of the song “Idolatry” to the showy theatricality of “Parted,” the soprano tracked the music’s shifting moods and aspects.

The evening closed with the brawny, jazz-inflected mural of Harlem. Morgan and the musicians gave the musical portraits of bustling street life, night clubs and cacophonous traffic the full-throttle treatment. A percussion fever-storm broke out near the end, a fitting exclamation point for this expansive and vivid concert.